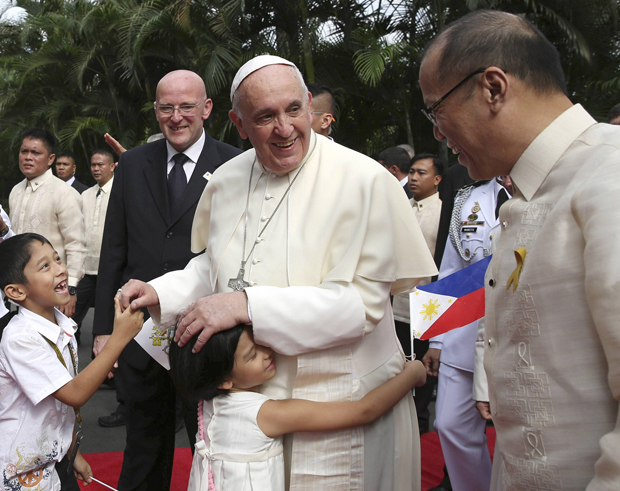 VATICAN CITY (CNS) — Pope Francis knows the family is made up of real people living in the real world, which is why he often gives down-to-earth advice.

The Catholic Church has long taught that the family is a school of humanity — the first and best place to learn about love and respect. In fact, a healthy society relies on citizens who learn love, responsibility, loyalty, acceptance of others and solidarity from their family relationships, Pope Francis has said.

The pope, a former teacher, has, in a way, been handing today’s families detailed lesson plans, offering guidance in what actually needs to be done. The world Synod of Bishops on the family, which the pope has convoked for October, also is expected to deliver concrete guidelines for the pastoral care of the family and its members.

By devoting his general audience talks to the family since last December, as well as making the family a key topic of other speeches and homilies, Pope Francis has been offering concrete and, at times, colorful advice, which will give people gathering for the World Meeting of Families in Philadelphia in September plenty of material to parse through.

The pope’s approach starts from the bottom up.

He doesn’t begin with a textbook concept or picture-perfect ideal everyone needs to magically become an exact replica of. The family is a real institution made up of very human, and therefore, limited members who need real help.

With examples from his own life and the real lives of others, he points to what is happening “on the ground” and then builds a pastoral plan — what would God’s response be to this reality.

For example, the Christian response to the all too typical problem of anger or misunderstanding is to choose the path of dialogue, which requires eating lots of tart “humble pie,” he said in a homily in January 2014.

“Sometimes the plates will fly,” the pope said. But “after the storm has passed,” things have to be worked out as soon as possible, “with a word, a gesture,” so no one ends up “isolated in this bitter broth of our resentment.”

Other similarly practical advice he has given couples: play with your kids more, stop the swearing, be more affectionate and always say, “Please,” “May I” and “Thank you.” Moms and dads must lead the way, he says;they are the most influential role models for their kids.

Kissing in front of the children is a “beautiful witness,” he told parents in June 2015. Children watch their parents carefully and “when they see that dad and mom love each other, the children grow in that climate of love, happiness and security.”

He has told youngsters to go out, discover the world and “build everything together, do everything with love, everything is possible and faith is an event always to be proclaimed.”

Talk to your best friend, Jesus, every day, he told children in December 2014, and be “apostles of peace and serenity” at home and at school.

“Remind your parents, brothers and sisters and peers that it is beautiful to love one another and that misunderstandings can be overcome, because when we are united with Jesus everything is possible,” he said.

Giving advice to grandparents, the pope has said that families and kids need their prayers, wisdom and gifts to give them the encouragement, hope and faith they often lack in today’s frenetic world.

“We older people can remind ambitious young people that a life without love is barren. We can tell fearful young people that worrying about the future can be overcome. We can teach young people who are in love with themselves too much that there is more joy in giving than receiving,” he told his fellow seniors in March 2015. The pope’s dream is that families challenge today’s throwaway culture with “the overflowing joy of a new embrace between young and old people.”

Key to drawing the needed strength and inspiration is reading the Gospel, prayer, confession, Communion and fellowship with the poor, he said in May 2015.

The Holy Family is still the perennial role model for families, the pope has said. Mothers can mirror the same love and attention Mary had for her son, and fathers can exemplify the patience and understanding of Joseph who did everything to support and protect his family.

The real secret, he said, is just to “welcome Jesus, listen to him, speak to him, take care of him, protect him and grow with him” like Mary and Joseph did, and “that is how the world will become better.”

Pope Francis knows families cannot do it on their own. He also insists policymakers and leaders devise and support policies that build up families and neutralize their biggest threats: war, poverty, consumerism and economic policies that promote the worship of money and power.

Justice for women must be promoted since, in the West, they face discrimination in the workplace and often are forced to choose between family and job obligations, the pope has said. Also, women too often face violence in “their lives as fiancees, wives, mothers, sisters and grandmothers” and, in developing countries, “women bear the heaviest burden” by having to walk miles to collect water, often risk dying in childbirth, and face kidnapping, rape and forced marriages, he said in May 2015.

Culture needs a humanizing re-haul, too, he said, to ease the pressure on couples to not be afraid of the lifelong commitment of marriage and to see children as a blessing, not a burden.

Pope Francis has been especially vocal about resisting current trends that seek to legitimize same-sex unions, contraception and fluid notions of gender. He warned families in the Philippines against this “ideological colonization that tries to destroy the family” and takes away human identity and dignity, and he repeatedly has reaffirmed church teaching that marriage is a lifelong bond between a man and a woman.

Given the many challenges — both within society and within the walls of the family home — Pope Francis regularly praises the many men and women who are fighting the good fight every day.

Leaders and communities “should kneel before these families, who are a true school of humanity, who are saving society from barbarity” by staying together and safeguarding their bonds amidst difficult conditions, even in poverty and crisis, he has said.

Regular men and women who care for their infirm loved ones, miss a night of sleep and still roll into work the next day are the “hidden heroes” and the “hidden saints” of today, he said.

The pope has urged the men and women who are on the right path to lend a hand to help evangelize and to help other families heal so that the teachings of the faith will touch more people’s hearts and give them the strength to follow God’s will.

NEXT: Ukrainian bishop warns of mass starvation, flight of millions