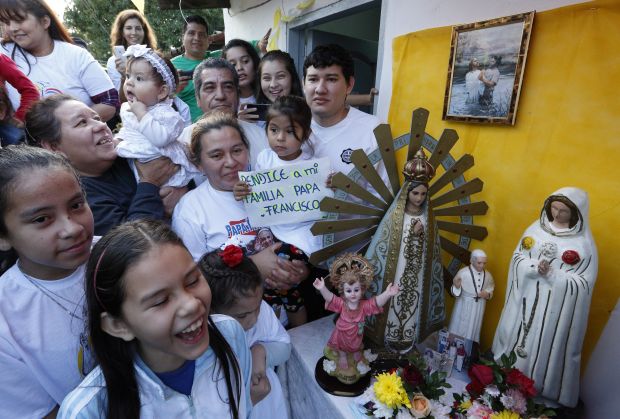 “I couldn’t be in Paraguay without being with you, in your land,” he told the crowd gathered outside St. John the Baptist chapel, one of 13 chapels in the huge Holy Family Parish. As archbishop of Buenos Aires, Argentina, Pope Francis ministered in similar neighborhoods.

Bishops in Paraguay had wanted the pope to meet with small farmers and indigenous people who have been forced off their land. When those groups were invited instead to a larger meeting with civic organizations, the bishops organized the visit to Banado Norte, one of a string of riverside neighborhoods called the Banados, which were mainly settled by migrants from rural areas.

The pope praised the people for their solidarity, calling it a “human and Christian virtue that you have, and which many, many of us have to learn.”

“It doesn’t matter how often you go to Sunday Mass,” the pope said. “If you don’t have a heart of solidarity, if you don’t know what is happening to your people, your faith is very weak, or it is sick, or it is dead. It is a faith without Christ, without God, without brothers and sisters.”

Faith and solidarity are the greatest message that the people of the Banados can send to the rest of the country, Pope Francis said. He warned, however, that “the devil wants you to fight among yourselves, because that’s the way he divides you, defeats you and robs you of your faith.”

Pope Francis said the families he met as he walked down an alley in Banado Norte reminded him of the Holy Family.

“They also had to leave all they had and go to another land, where they knew no one, where they had no home or family,” he said.

And the first witnesses to Jesus’ birth were shepherds, “whose lives are also governed by the inclemency of weather and other types of inclemency,” he said.

That message resonated with Carmen Sanchez, who welcomed Pope Francis to her tiny, dark house in an alley behind the chapel where he greeted and blessed her and her neighbors. 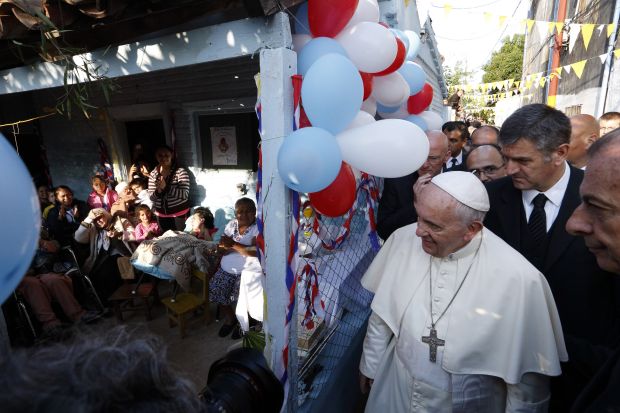 When Sanchez’s mother arrived from a rural town 60 years ago, this boggy area beside the Paraguay River was the only land available to poor migrants.

“It was awful, all water and mud,” Sanchez told Catholic News Service. “Her home was made of mud bricks.”

Other families arrived, gradually filling in the worst of the muddy areas and building the Banados, which stretch for kilometers along the riverbank.

Every year around April or May, the water level rises and the river often overflows its banks. In 2014, it nearly reached to the door of the tiny chapel where the pope spoke to the people who crowded into the muddy sports field, waving yellow and white scarves and cheering him warmly.

Every year, some families are forced to leave their homes and take refuge with relatives elsewhere or camp along roads on higher ground, Jesuit Father Ireneo Valdez, pastor of Holy Family Parish, told CNS. Last year’s flooding displaced most of his parish’s 20,000-plus families.

As Pope Francis visited the chapel and spoke to the crowd, he was flanked by huge posters of letters and drawings by about 2,500 children from schools, welcoming him, recounting the problems of their families and neighborhoods — flooding, drugs, crime, sickness, separation — and asking his blessing.

Several children expressed fear that their families will be forced to move.

That is on the minds of most adults, as well. The city government has plans to fill in the area, extend a riverside highway, raze the houses built by people like Sanchez’s mother and replace them with upscale shopping centers and apartment buildings.

“They want to take us away from of our places,” Maria Josefina Chamorro, chapel coordinator, told CNS. “We built this chapel ourselves. We have schools and a health center. It would be sad to be taken away from all of this, which we built with so much effort and sacrifice, to a place where we would have to start all over.”

Before Pope Francis’ visit, Maria Garcia, who heads an umbrella group of 11 community organizations, told CNS residents of the Banados lack property titles, and some areas do not even show on maps. 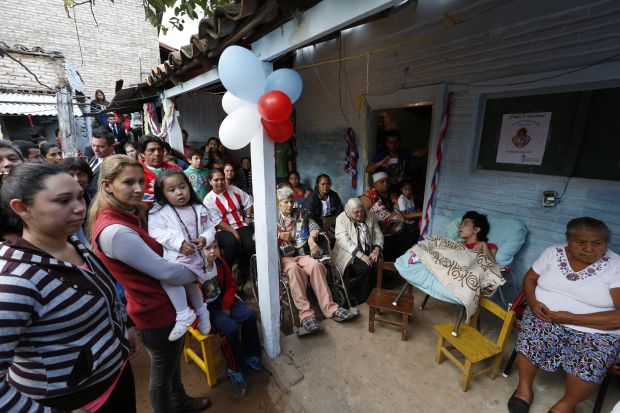 As the pontiff sat on the stage beside the chapel July 12, Garcia described the problem to him and called for affordable land titles, “decent housing or the possibility of improving what we have, health care and the possibility of a decent education.”

Most Banados residents eke out a living by fishing, gathering and selling recyclable materials, laboring as masons or carpenters, cleaning windshields at traffic lights or selling items on the street, Father Valdez said.

City officials have tried to relocate people to housing elsewhere, but because their livelihoods center around the riverbank neighborhoods, they return.

He and Garcia called for a solution that would allow people to stay in their neighborhoods.

“We can’t oppose economic growth, but it needs to be better distributed,” Father Valdez said. “The policies need to benefit the people who live here.”

The neighborhood organizations have a counterproposal for development that would allow the Banados residents to remain in their neighborhoods, Garcia said, but they have not gotten a hearing from the city government.

Local residents said they hoped the pope’s visit would call attention to their plight, but they noted that city workers who improved their rutted road before the pope’s arrival spread gravel only as far as the chapel he would visit, leaving just a muddy track beyond it.

As Pope Francis bade farewell to the crowd before returning through the alley past Sanchez’s house to head for Mass in Nu Guazu Park, he offered a final word of encouragement.

“Keep going,” he told the crowd, “and don’t let the devil divide you.”