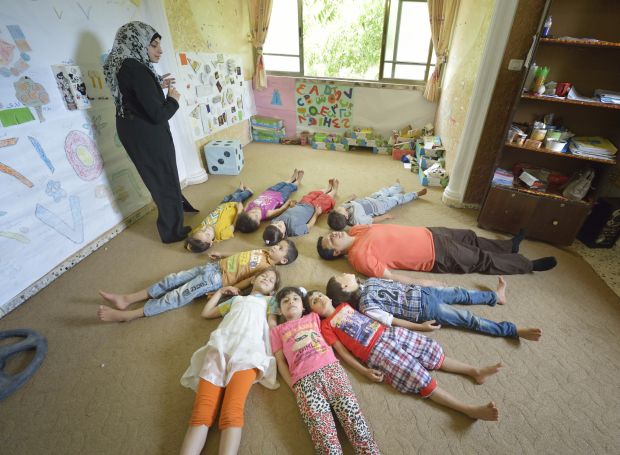 GAZA CITY, Gaza Strip (CNS) — One year after a war with Israel that turned daily life here into a nightmare, a Catholic priest in Gaza said the situation in this besieged Palestinian territory has deteriorated even further.

“Compared with a year ago, we’re worse off. Although a truce stopped the war, the blockade of Gaza by Israel has grown more intense. This has direct consequences for the population,” said Father Jorge Hernandez, pastor of Holy Family Catholic Parish in Gaza City.

The priest said the war also served as a recruiting tool for Hamas, the Islamic party that has controlled Gaza since 2007.

“The war generated new activism throughout Gaza. The number of people willing to fight has multiplied, whether on behalf of Hamas or Islamic Jihad or the Salafists, and now even with the Islamic State. Despite that, the great majority of the people of Gaza is not aligned with one party or another. They just want to live a normal life,” Father Hernandez, an Argentine missionary of the Institute of the Incarnate Word, told Catholic News Service.

The 50-day war cost the lives of more than 2,250 Palestinians, 65 percent of whom were civilians, according to a June report from a U.N. investigation. The report said “the scale of the devastation was unprecedented.” It said the Israeli military launched more than 6,000 air strikes, 14,500 tank shells and 45,000 artillery shells into Gaza between July 7 and Aug. 26, 2014.

The war also “caused immense distress and disruption to the lives of Israeli civilians,” the U.N. said, reporting that nearly 4,900 rockets and more than 1,700 mortars were fired by Palestinian armed groups during that period. Sixty-six Israeli soldiers were killed, along with six civilians. 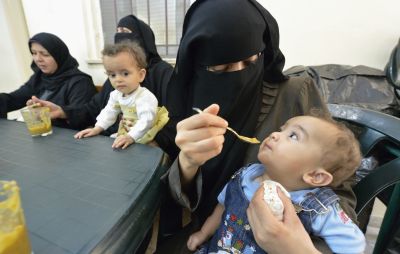 A mother feeds her child in a feeding program clinic in Gaza City. (CNS photo/Paul Jeffrey)

The report also cites as possible war crimes the conduct of Israeli operations in residential neighborhoods, as well as the killing of 21 suspected collaborators by Hamas’ armed wing.

Father Hernandez said militants came to his church compound twice looking for alleged spies among some 1,400 civilians who took shelter there. Church buildings were damaged when Israel bombed a neighboring house. At one point, Father Hernandez and several members of the Missionaries of Charity shepherded a group of 29 disabled children and nine elderly women into the open.

“We put them in the patio in front of church, a place that’s far from any homes. And then we prayed that Israel wouldn’t bomb the church,” he said.

Gaza’s children continue to be affected by the war, the priest said. Besides thousands who remain in temporary shelters, he said the overwhelming violence of the conflict has created discipline problems, with normal tensions in the family and on the street more quickly escalating into physical violence. And lingering stress generates health problems.

“Some kids continue to have problems with speech or bed-wetting, and now that there are rumors of another war — some are even talking about specific dates — one child’s hair has started to fall out again,” he said.

One Catholic leader in the region said that Gaza’s Christians have nonetheless adjusted to their perilous situation.

“When I came here immediately after the war, everyone I talked to pleaded for a one-way ticket out of Gaza. But I no longer hear that. They are resilient, this is their home, and they’re resolved that they’re going to make a contribution to society. They are proud to be both Christian and Palestinian, no matter the difficult conditions,” said Sami El-Yousef, regional director for Palestine and Israel of the Catholic Near East Welfare Association.

Of Gaza’s 1.8 million population, only about 1,300 are Christian. Catholics number fewer than 200. Relations between this small minority and the Muslim majority have been marred by discrimination.

“When one looks for work here, the first thing they ask is if you are a Muslim. If you are, then they ask if you support Hamas or Fatah. If neither, they ask which mosque you go to, because they want to know who you’re loyal to,” Father Hernandez said. “But if you’re a Christian, you won’t get asked those questions because you won’t get the job. The only way Christians can get jobs is through a Muslim friend who serves as an intermediary. No store or school or bank will give them a job, so they come to the church asking for help.” 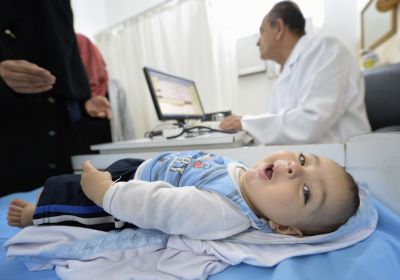 A baby looks around while the mother talks to a doctor in Gaza City, June 6. The clinic serves Palestinian refugees and is supported by the Pontifical Mission for Palestine and the Catholic Near East Welfare Association. (CNS photo/Paul Jeffrey)

There are occasional episodes of harassment of Christians on the street, Father Hernandez said, which is one reason he maintains good relations with Hamas officials.

“It’s important for me to have good contacts, because if there’s a problem I just call someone at a high level and immediately they respond and grab the responsible person. If I had to go to the police to file a report, and the police officer had a long beard, then nothing would happen,” he said.

Vatican support for Palestinians, which has strengthened under Pope Francis, has helped ease tensions on the ground, Father Hernandez said.

Father Hernandez had an opportunity to personally thank Pope Francis for the Vatican’s protagonism when the priest was invited to the Vatican the day after the war ended last year.

“Bishop William Shomali (the auxiliary bishop of the Latin Patriarchate of Jerusalem) called me on the phone and said I had to leave Gaza immediately,” Father Hernandez recalled. “But we had just finished living through a war. I couldn’t understand what was more urgent than remaining here with the people. But he didn’t want to tell me the reason over the phone. I pushed him, and finally he told me in Latin, ‘The man in white wants to see you.’ At first I thought I was losing my Latin. I asked him if I was understanding correctly, and he said yes. I called my superior, and he went to talk with the Latin Patriarch. He called me back in 30 minutes and told me it was true. So I packed my things and left.”

Two days later, Father Hernandez was embraced by his fellow Argentine inside the Vatican.

“He was a true pastor, hurting for all that had happened to the people here. He was sad about the violence on both sides. When we spoke of the children, he got emotional. We spoke at length about how the chemicals used in the war had affected the health of the people. He knew a lot about what had gone on in Gaza,” Father Hernandez said.

“I told him how much we appreciated a message he sent us in the middle of the war. I told him we had translated it for all the people, and that it was a big source of hope and courage for us.”

The priest said that at one point during the hourlong meeting he confessed to Francis that he was nervous. “He told me not to worry, to feel at home. I looked around and thought, ‘The Vatican is now my house. Caramba.'”

NEXT: A year after war, Gazans persist at rebuilding — with help of aid groups