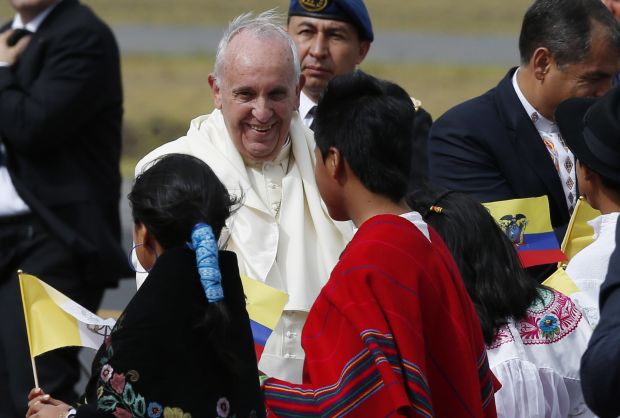 QUITO, Ecuador (CNS) — Although still thousands of miles from his birthplace in Argentina, Pope Francis made a homecoming of sorts July 5 when he landed in Ecuador, greeted by cheering crowds and the sights and sounds of South America.

After a 12-hour flight from Rome, the pope participated in a brief welcoming ceremony at Quito’s Mariscal Sucre Airport, telling government dignitaries, bishops and special guests that his pastoral work before becoming pope had taken him to Ecuador many times.

“Today, too, I have come as a witness of God’s mercy and of faith in Jesus Christ,” he said.

Mercy and faith, he said, have shaped Latin American culture for centuries, contributing to democracy and improving the lives of countless millions of people.

“In our own time, too, we can find in the Gospel a key to meeting contemporary challenges,” the pope said, including respecting national, ethnic, religious and cultural differences and fostering dialogue.

The pope’s visit followed a period of public protests over Ecuadorean government policies. Initially triggered by proposed inheritance and capital gains taxes, the protests also have targeted what even some of Ecuadorean President Rafael Correa’s supporters describe as his heavy-handed approach.

Christian values, the pope said, should motivate citizens to promote the full participation of all people in their nation’s social, political and economic life “so that the growth in progress and development already registered will ensure a better future for everyone, with particular concern for the most vulnerable of our brothers and sisters to whom Latin America still owes a debt.”

The program for the pope’s July 5-12 tour of Ecuador, Bolivia and Paraguay was punctuated with formal meetings with government officials and with large public Masses, but it also was filled with visits to the poor, the sick and the elderly, and prisoners. 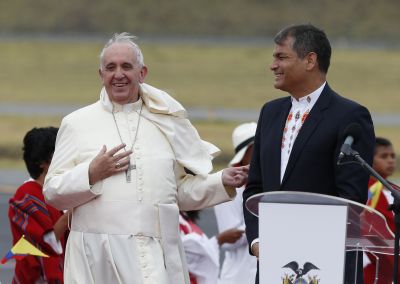 Pope Francis demonstrated his knowledge of Ecuador and the country’s geography when expressing his hope for the nation. “From the peak of Chimborazo to the Pacific coast, from the Amazon rainforest to the Galapagos Islands, may you never lose the ability to thank God for what he has done and is doing for you,” the pope said.

“May you never lose the ability to protect what is small and simple,” he continued, “to care for your children and your elderly, to have confidence in the young and to be constantly struck by the nobility of your people and the singular beauty of your country.”

“Ecuador loves life,” Correa told the pope at the airport ceremony, noting that the constitution protects life from the moment of conception. “It establishes recognizing and protecting the family as the basic core of society and commits us deeply to caring for ‘our common home,'” referring to the environment with the same words Pope Francis used in his encyclical, “Laudato Si’.”

Correa said Ecuador’s was the “first constitution in the history of humanity to grant rights to nature.” Twenty percent of the country is protected in parks and reserves, Correa told the pope.

Some environmental and human rights organizations in Ecuador have questioned Correa’s commitment to environmental safeguards, as conflicts have erupted over plans for open-pit mining and expanded oil and gas exploration and production.

Walking the red carpet at the airport, Pope Francis was greeted by dozens of children and young people dressed in a wide variety of traditional clothes. Correa told the pope that his country is culturally diverse, with a mixed-race majority, as well as 14 indigenous peoples, including two nomadic groups that continue to shun contact with the outside world.

Correa said that “the great social sin of our America is injustice. How can we call ourselves the most Christian continent in the world if we are also the most unequal, when one of the most repeated signs of the Gospel is sharing bread?”

During the flight from Rome, Pope Francis only briefly addressed the 70 members of the media traveling with him. He thanked them for their work, which “can do so much good.” Instead of answering their questions — his practice usually only on flights back to Rome — he walked down one aisle of the Alitalia plane and up the other, greeting each person.

PREVIOUS: Local events slated for the Year of Mercy