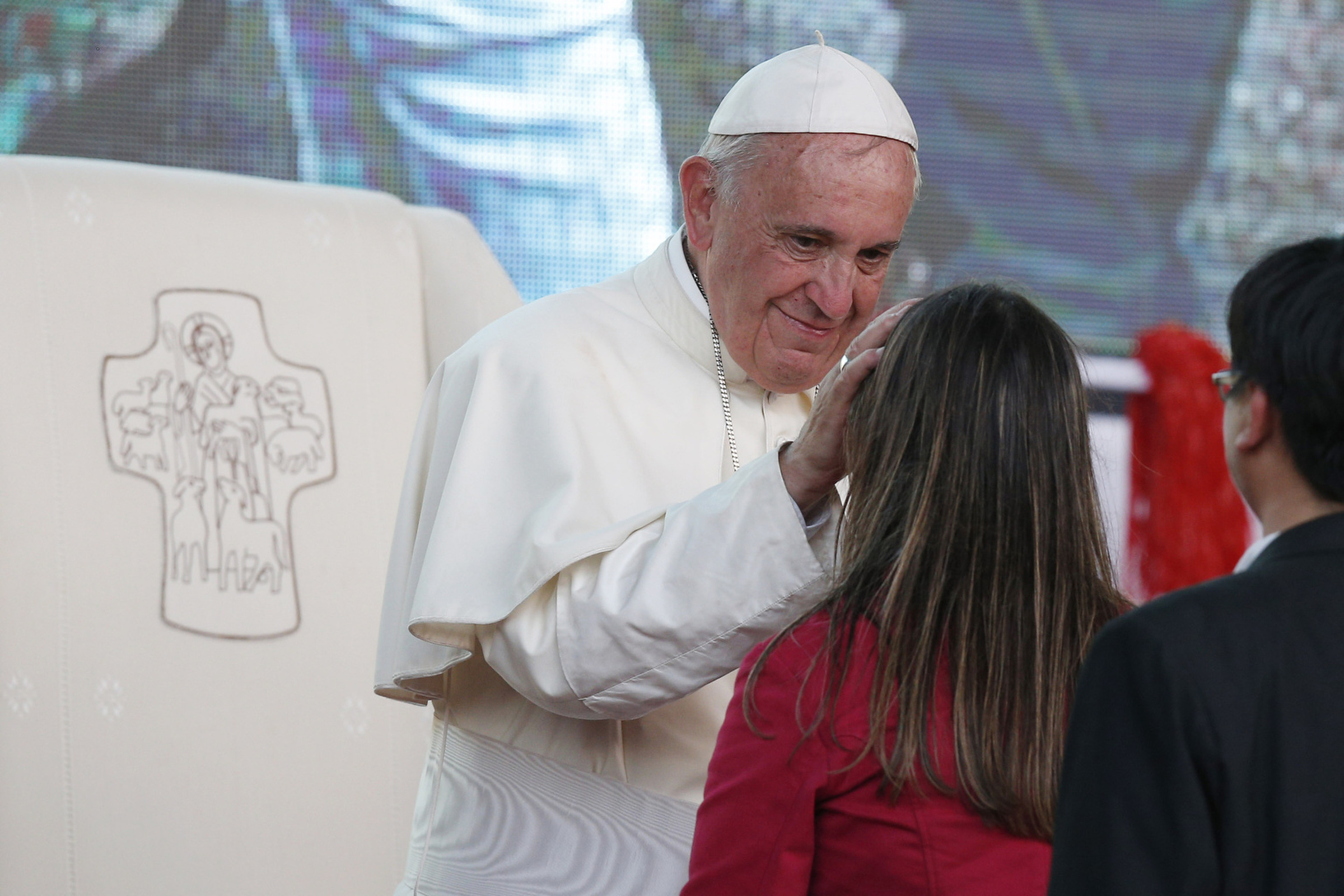 Pope Francis greets a young woman as he leads a meeting with young people along the waterfront in Asuncion, Paraguay, July 12. (CNS photo/Paul Haring) 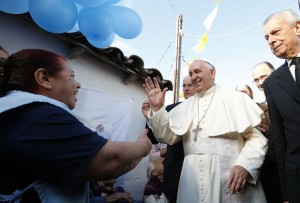 People make special preparations for welcoming a special guest, and watching what worked and did not work in Ecuador, Bolivia and Paraguay may help people preparing for Pope Francis’ visit to the United States in September.

Some of the plans, however, will require common-sense adjustments, especially because the U.S. Secret Service is likely to frown on certain behavior, like tossing things to the pope — a phenomenon that occurs much more often with Pope Francis than with any previous pope. At the Vatican, the items tend to be soccer jerseys and scarves; in Ecuador, it was flower petals — lots of them.

Watching the pope July 5-12 in South America it is clear:

— Pope Francis loves a crowd. He walks into events with little expression on his face, then lights up when he starts greeting, blessing, kissing and hugging people. Persons with disabilities, the sick and squirming babies come first.

— The pope does not mind being embraced, but he does not like people running at him. As a nun in Our Lady of Peace Cathedral in La Paz rushed toward Pope Francis July 8, the pope backed up and used both hands to gesture her to calm down and step back. In the end, she did get a blessing from him, though.

— At Mass, Pope Francis tends to be less animated. His focus and the focus he wants from the congregation is on Jesus present in the Eucharist. At large public Masses on papal trips, he sticks to the text of his prepared homilies, although he may look up and repeat phrases for emphasis.

— A meeting with priests, religious and seminarians is a fixture on papal trips within Italy and abroad; in Cuba and the United States, the meetings with take place during vespers services, Sept. 20 in Havana and Sept. 24 in New York. At vespers, like at Mass, Pope Francis tends to follow his prepared text. However, when the gathering takes place outside the context of formal liturgical prayer, he never follows the prepared text, even if he may hit the main points of the prepared text as he did in Bolivia July 9.

— Pope Francis has said he needs a 40-minute rest after lunch and his official schedule always includes at least an hour of down time. However, like his “free” afternoons at the Vatican, the pope often fills the breaks with private meetings with friends, acquaintances or Jesuits. In fact, his trips abroad have always included private get-togethers with his Jesuit confreres, although in South America one of the meetings — in Guayaquil, Ecuador — was a luncheon formally included in the itinerary. But he also spent unscheduled time with Jesuits at Quito’s Catholic university the next day. In Paraguay, he made an unscheduled visit to 30 of his confreres in Asuncion and then went next door to their Cristo Rey School to meet with more than 300 students from Jesuit schools.

— In South America, Pope Francis specifically asked that his meetings with the bishops be private, informal conversations — similar to the way he handles the regular “ad limina” visits of bishops to the Vatican to report on the state of their dioceses. For the “ad limina” visits, he hands them the text of a rather general look at their country and Catholic community, then begins a discussion. But when he makes a formal speech to a group of bishops, his words can seem critical. But, in fact, the tone tends to be one of addressing his “fellow bishops” and his words are more of a collective examination of conscience than a scolding.

— Pope Francis’ speeches in general — whether to presidents, civic and business leaders, young people or even, for example, the prisoners in Bolivia — acknowledge what is going well and being done right, then seeks to build on that. It’s a combination of a pat on the back and a nudge forward. While Bolivia’s Palmasola prison is notorious for its difficult conditions and while the pope pleaded for judicial reform in the country, he also told the prisoners: “The way you live together depends to some extent on yourselves. Suffering and deprivation can make us selfish of heart and lead to confrontation.”

— Since the days of the globetrotting St. John Paul II, the nunciature stakeout has been a staple of papal trips. In fact, anywhere a pope sleeps, people will gather — shouting and singing — in the hopes that the pope will make a special appearance. St. John Paul, retired Pope Benedict XVI and Pope Francis have all obliged on occasion. Although in Quito, Ecuador, it seems that Pope Francis was inspired at least partially by the complaints of neighbors about the noise. The three nights Pope Francis stayed there, he came out to say good night. Increasingly his tone was that of a dad who had already told his children five times to go to bed.