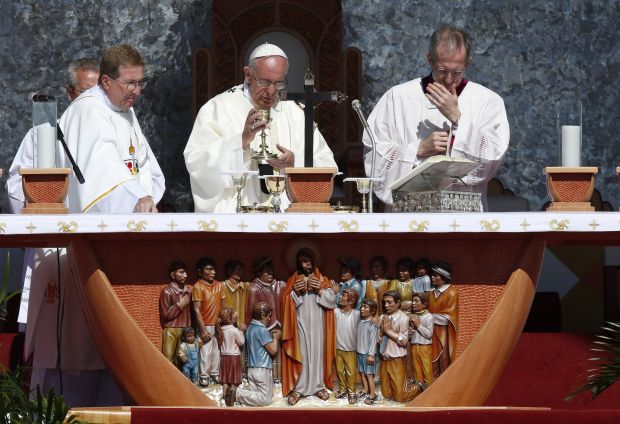 SANTA CRUZ, Bolivia (CNS) — The Eucharist is a missionary sacrament; it calls people to give all they are and have to God, seek his blessing and then take his love to the world, Pope Francis said at the opening Mass for Bolivia’s national eucharistic congress.

Obeying Jesus’ command to “do this in memory of me,” he said, “demands exchange, encounter and a genuine solidarity.”

“It demands the logic of love,” the pope said July 9 at the Mass in Santa Cruz’ central Christ the Redeemer Square.

People from Bolivia and from throughout South America flocked to the city for the Mass, setting up a tent city July 8 on the four main roads converging in the square. The government set up jumbo screens along the roads for those unable to get close to the papal altar, even though they had camped out.

“We have come from a variety of places, areas and villages, to celebrate the living presence of God among us,” the pope told them. The Argentina-born pope who, in Bolivia, has insisted on the importance of the church’s role in Latin American culture and history, said many of the countries represented at the Mass “were born of the name of Jesus.”

David Flores, a volunteer with the Diocese of Tarija, on the Argentine border, said he came to the Mass praying that “there is a conversion in each person” and that such change in individuals would lead to “an improved political climate and peace between the government and church.”

Cesar Justiniano, an engineering student and volunteer for the papal visit, said, “We need to believe again in God being the solution.”

In his homily, Pope Francis said that when life gets difficult, people can forget how much God has done for them and their hope can fade. When that happens, the pope said, the temptation is to “think only of ourselves” and close our hearts to the needs of others, especially the poor.

Referring to the Gospel story of the multiplication of the loaves and fishes, Pope Francis pointed out that the disciples did not think it would be possible to feed so many people, and they thought Jesus should send the crowd away.

Like the disciples, he said, “faced with so many kinds of hunger in our world, we can say to ourselves: ‘Things don’t add up; we will never manage, there is nothing to be done.'”

But Jesus said to the disciples and says to all his followers today, “You give them something to eat.”

“Those words of Jesus have a particular resonance for us today,” the pope said. “No one needs to go away, no one has to be discarded; you yourselves, give them something to eat. Jesus speaks these words to us, here in this square.”

Jesus takes the little bread and fish available, the pope said, “he blesses them and then gives them to his disciples to share with the crowd. This is how the miracle takes place. It is not magic or sorcery.”

But Jesus’ starting point is not the little bit of food at hand, the pope said. Rather, it is the people before him and their needs.

“He is not so much concerned about material objects, cultural treasures or lofty ideas. He is concerned with people,” Pope Francis said.

Jesus takes what is available, and he offers it to God for a blessing, a sign that “he knows that everything is God’s gift.”

A blessing, he explained, is both an act of thanksgiving and of transformation: “It is a recognition that life is always a gift which, when placed in the hands of God, starts to multiply. Our Father never abandons us; he makes everything multiply.”

The Eucharist is the supreme act of blessing — of thanksgiving and transformation, Pope Francis said. It is “a sacrament of communion, which draws us out of our individualism in order to live together as disciples. It gives us the certainty that all that we have, all that we are, if it is taken, blessed and given, can, by God’s power, by the power of his love, become bread of life for all.”

As people called to remember Jesus’ supreme sacrifice in the celebration of the Eucharist, the pope said, Catholics must be people of “encounter and a genuine solidarity.” Partaking in the Eucharist “demands the logic of love.”

Dora Villaruel, a social science professor from Santa Cruz, said, “The pope is showing the inequality that we all need to overcome. Inequality is so noticeable here. A lot of discrimination exists, too.”

NEXT: Nigerian bishop condemns suicide blast, says youth must be on guard