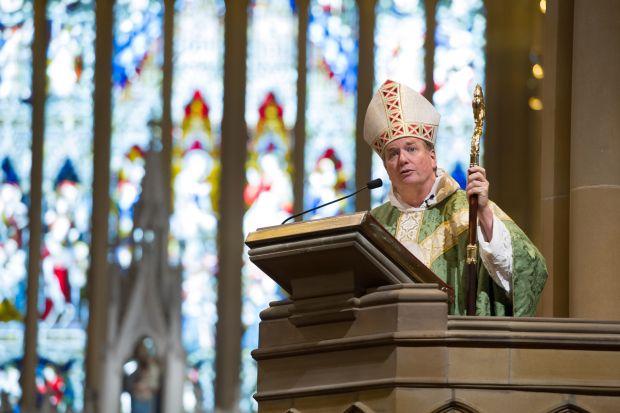 Archbishop Anthony Fisher of Sydney delivers the homily during the annual Marriage Mass and renewal of vows July 12 at St. Marys Cathedral in Sydney. As the debate on same-sex marriage heats up in Australia, Archbishop Fisher warned against voices in the culture which argue against traditional marriage. (CNS photo/Giovanni Portelli, The Catholic Weekly)

SYDNEY (CNS) — Archbishop Anthony Fisher of Sydney has decried efforts to “bully” people into accepting the deconstruction of marriage, saying a “homogenizing ‘equality'” was marginalizing questions about “what marriage is and is for.”

Archbishop Fisher made the comments in his homily at the annual Marriage Mass and renewal of vows July 12 at St. Mary’s Cathedral, Sydney.

“There are voices in our culture that no longer think marriage need be for life, or be open to children, or be exclusive, or be between man and wife,” Archbishop Fisher told the standing-room-only congregation, including 30 couples celebrating anniversaries of 50-65 years.

Christian couples found themselves in “an uncomfortable position,” the archbishop said, “for some politically, culturally and commercially powerful forces are determined to silence any alternative to the politically correct position in this matter; to bully us all into accepting the deconstruction and redefinition of a fundamental institution; and to relegate questions of what marriage is and is for as secondary to an homogenizing ‘equality.'”

“They write off as benighted and bigoted those who stand by marriage as traditionally understood.”

Archbishop Fisher said that in the context of culture which had forgotten about its purpose and meaning, true marriage was “a form of preaching and therapy.”

“It wordlessly bears witness to the Christian understanding of the human person and society, of our God-given mission to love not just with a self-serving, romantic, heart-shaped Valentine’s Day sort of love, but with a self-giving, redemptive, cross-shaped Easter Day sort of love.”

The push for same-sex marriage in Australia has gained momentum in recent months in the wake of the “yes” vote in Ireland’s marriage referendum May 22.

Many federal members of Parliament subsequently announced they were now in favor of “marriage equality.”

Momentum has also developed in the country’s business sector, with many of its largest corporations, including its leading banks and airlines, lending their brands to national advertising for marriage equality May 29.

The Australian Catholic Bishops’ Conference released a pro-marriage pastoral letter, “Don’t Mess With Marriage,” May 28, which was distributed to parishes and schools, including to each student in Catholic schools in Sydney and Melbourne and other Australian dioceses.

Reports of a backlash from some parents, students and several unnamed schools followed, with a small number of students in western Sydney reportedly burning the 18-page booklet in protest.

Australian Marriage Equality director Rodney Croome denounced the letter as “harmful” and accused the bishops of making children “the couriers of prejudice” in giving them the letter.

Archbishop Fisher said during his homily that to acknowledge the unique relationship of husband and wife was “not to criticize anyone,” including people of same-sex attraction and separated and divorced people who had “genuinely given marriage their all.”

“Marriage, as traditionally understood … (when) our jubilarians entered into it, meant a comprehensive bodily, psychological and spiritual union between a man and a woman whereby they become ‘one flesh’ and so found a family.

“That is why these couples did not promise to become spouses or partners but to become husband and wife,” he said.

“These dimensions of real marriage make it a prophetic sign today, a sign of contradiction, because some want to reduce marriage to no more than a public statement of a physical-emotional bond between any two people.”

Archbishop Julian Porteous of Hobart, a former auxiliary bishop of Sydney, responded to threats from same-sex marriage supporters that they would complain to Tasmania’s anti-discrimination commissioner about the distribution of the pastoral letter.

“It is an indication, I think, that if there is a change in the definition of marriage, anybody who opposes it will come under quite intense intimidation,” Archbishop Porteous told The Catholic Weekly in Sydney. “It would mean that they would be imposing, really, complete acceptance of a change in the understanding of the nature of marriage.”

He also predicted that Australia’s Catholic schools, which receive large funding grants from state and federal governments, would come “under enormous pressure in our efforts to safely present the Catholic teaching.”

NEXT: Bishop: Vatican is free to work with everyone, UN is not the ‘devil’