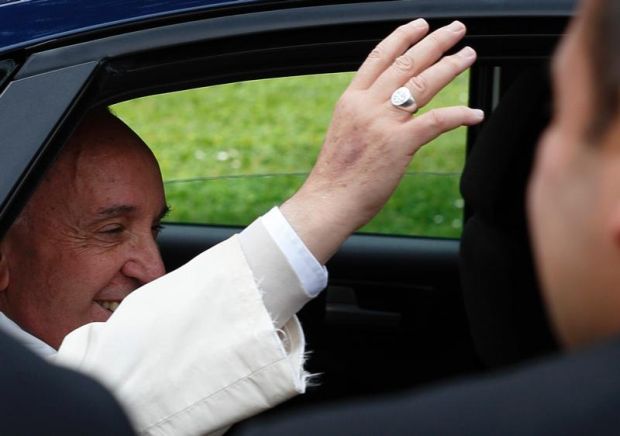 VATICAN CITY (CNS) — Returning to the Vatican in the midst of a heat wave after an eight-day, three-country trip to South America, Pope Francis took the kind of vacation he said he prefers: what has become known as a “staycation.”

With the exception of a July 21 meeting with a group of mayors from around the world and the Sunday recitation of the Angelus, Pope Francis’ schedule was cleared of meetings, audiences and public appearances July 13-Aug. 4.

August is the heart of vacation time in Italy and at the Vatican, so the pope’s schedule will continue to be lighter than normal, but he will resume holding his weekly general audiences Aug. 5.

In the meantime, he is “serene and happy,” said Msgr. Guillermo Karcher, an Argentine priest and close aide to Pope Francis. “Every morning I see him and he’s content,” the monsignor told Vatican Radio July 24.

The pope spends much of the day with “his hands occupied, full of papers and correspondence,” he said. Personally responding to letters, especially from friends and acquaintances, is something Pope Francis did as archbishop of Buenos Aires and as pope he does it as much as possible, the priest said.

“Then there are the documents and projects for events in the immediate future,” Msgr. Karcher said, including for Pope Francis’ Sept. 19-27 visit to Cuba and the United States. The pope had told reporters traveling with him to Ecuador, Bolivia and Paraguay in early July, that “studying” for the September trip was on the top of his staycation to-do list.

Msgr. Karcher said, “this is a beautiful year” because Pope Francis’ travels will “embrace” all the Americas — from South America in July to Cuba and the United States in the north in September.

“It is really important, especially because it can shape and make concrete and visible that which was a very diplomatic and very pastoral effort” of encouraging Cuba and the United States to take the steps necessary toward normal relations, he said. The presidents of both nations credited Pope Francis and the Vatican with helping them with the negotiations.

“I think this makes this trip much more interesting;in addition to being a pastoral visit, it is almost a visit thanking the two nations for extending a hand to each other,” the monsignor said.

While Msgr. Karcher said the pope’s lighter schedule has given him time to catch up on correspondence and paperwork, he also confirmed that Pope Francis does miss his regular interaction with groups.

Vatican Radio also asked Msgr. Karcher, as an Argentinian, about mate, the herbal tea that he, Pope Francis and millions of people in Argentina, Paraguay, Uruguay, Brazil and Chile drink regularly.

The tea, often made in gourds and sipped through a metal straw, is made from the dried leaves of the yerba mate shrub, which is a member of the holly family. It does contain caffeine and Pope Francis told reporters traveling to South America with him that he found it helpful for dealing with the rigors of travel and with the altitude.

Msgr. Karcher told Vatican Radio it also “helps lower cholesterol and for those of us who eat a lot of meat, it’s very healthy.”

In Argentina, he said, drinking mate is a social event — sharing the same cup or at least sharing a mate break. People start drinking it as children — usually lukewarm and with milk.

Also, he pointed out, the drink is associated with the Jesuits, who promoted its use among the indigenous peoples, including as a way to combat alcoholism. Jesuit missionaries to South America in the mid-17th century domesticated the yerba mate plant and began farming and selling it, expanding its use throughout the region.

NEXT: Church leaders want Israel to step up protection of Christian sites