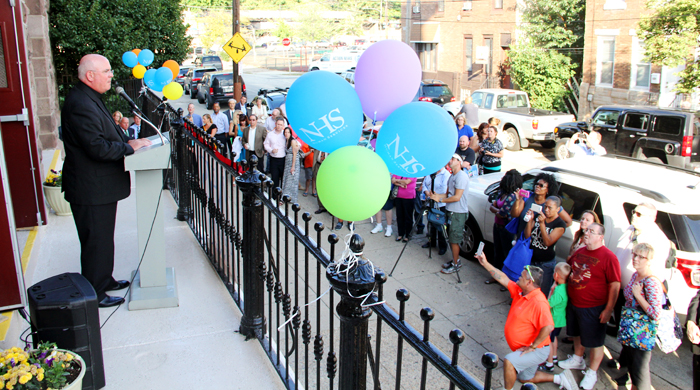 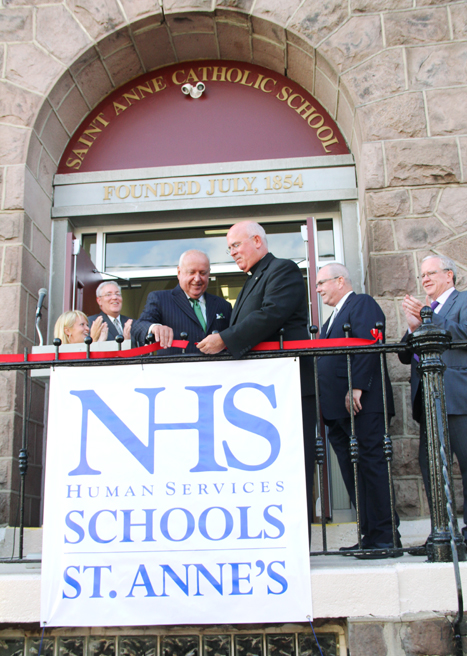 Following its 2011 closure as a Catholic parish school, the venerable St. Anne School in Philadelphia’s Port Richmond section gets new life this September as it reopens as a school for children with varying levels of autism. John Egan and Father Edward Brady cut the ribbon signifying the opening of the new school.(Sarah Webb)

St. Anne School in the Port Richmond section of Philadelphia, which as recently as the 1970s boasted more than 1,000 elementary school students, closed its doors in 2011 after serving the Catholic community for 155 years. It was the same old story — rising costs means lower enrollment, making it impossible to compete with free public schools and free charter schools.

In this case it wasn’t the end of the story. With an official ribbon cutting and open house held Aug. 26, the grand old building, outwardly unchanged in a century and a half, has been refurbished and is reopening in September as NHS School at St. Anne’s.

Ordinarily, when a parochial school reopens as a charter school it’s a mixed blessing. Yes, the parish gains funding from the sale or lease of the building, but the new school gives even more competition to remaining parochial schools in the area.

The NHS schools are different. They are not charter schools, although they rely a good deal on public funds; they are schools that target a specific need — children with various types and levels of autism.

“NHS supplies great solutions to the needs of the people,” said Father Edward Brady, pastor of St. Anne Parish. “They promote the highest standards of quality in the care they provide.”

It isn’t something that happened overnight, but it has been in the making literally since the parish school closed, and NHS was a perfect partner. Originally named Northwest Human Services because its 1969 beginnings were in Mount Airy in Northwest Philadelphia, NHS has become one of the nation’s largest non-profit providers of a broad spectrum of human services to adults, adolescents and children, especially in Pennsylvania.

NHS at St. Anne’s, which will open with about 60 students and will expand in future years, will be one of two such NHS schools operating in Philadelphia and one of 19 statewide.

“We will get our children from the School District of Philadelphia,” explained Joseph Martz, CEO of NHS Human Services. “It is not a charter school. All we do is serve children with special needs.”

It was no accident that NHS opted to open their school in the building of a closed Catholic school, according to Martz. “Our model has been to restore old Catholic schools back into service,” he said. 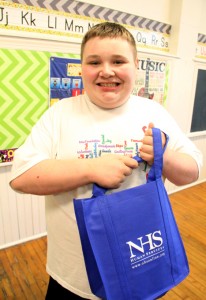 Quite a few NHS officials and civic officials were on hand for the ribbon cutting, including NHS Board Chairman M. Joseph Rocks, who also happens to be a former Pennsylvania state senator. Also there was NHS Board Member John J. Egan, who first proposed the idea of bringing NHS to St. Anne’s.

“I was there for the first meeting when Father Brady talked to us about putting a school in the building instead of selling to a developer,” Green said. “We were excited that we were able to provide this to the parish and the neighborhood. It will provide an income and stability to the parish for years to come. I hope the people of the parish are pleased with Father Brady’s solution. It is beautiful and exciting.”

But of course it is all about the children and their parents.

Erica Young, who attended St. Anne School as a child and loved the Sisters of St. Joseph who taught her, attended the ribbon cutting and social that followed, with an interest beyond nostalgia.

“My son, Joseph, attended another NHS school and he has made so much progress there. His school is much further away, we may switch to this one,” she said.

Margie Pliszka, who is a member of nearby Mother of Divine Grace Parish, was there with her son, Tyler. “He is just entering first grade and he has been designated with ASD (Autism Spectrum Disorder) and needs a little extra help. I want to send him here,” she said. 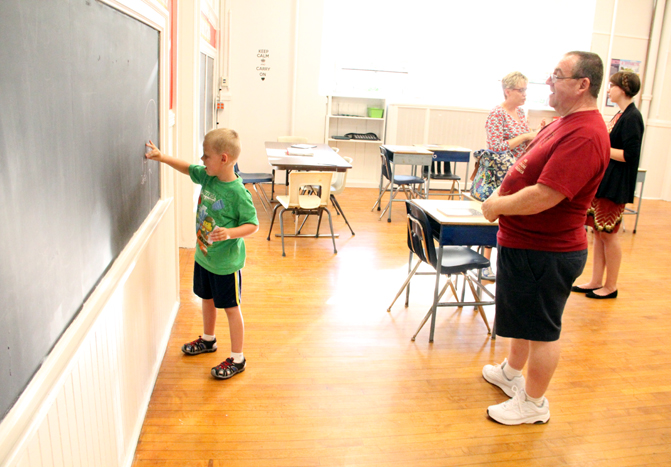 Tyler Pliska enjoys the classroom during the open house at the NHS school, as his parents learn more about it. (Sarah Webb)

NEXT: Archbishop Chaput comments on absolution for abortion