From Fishtown to Rome: Local priest heads a global order 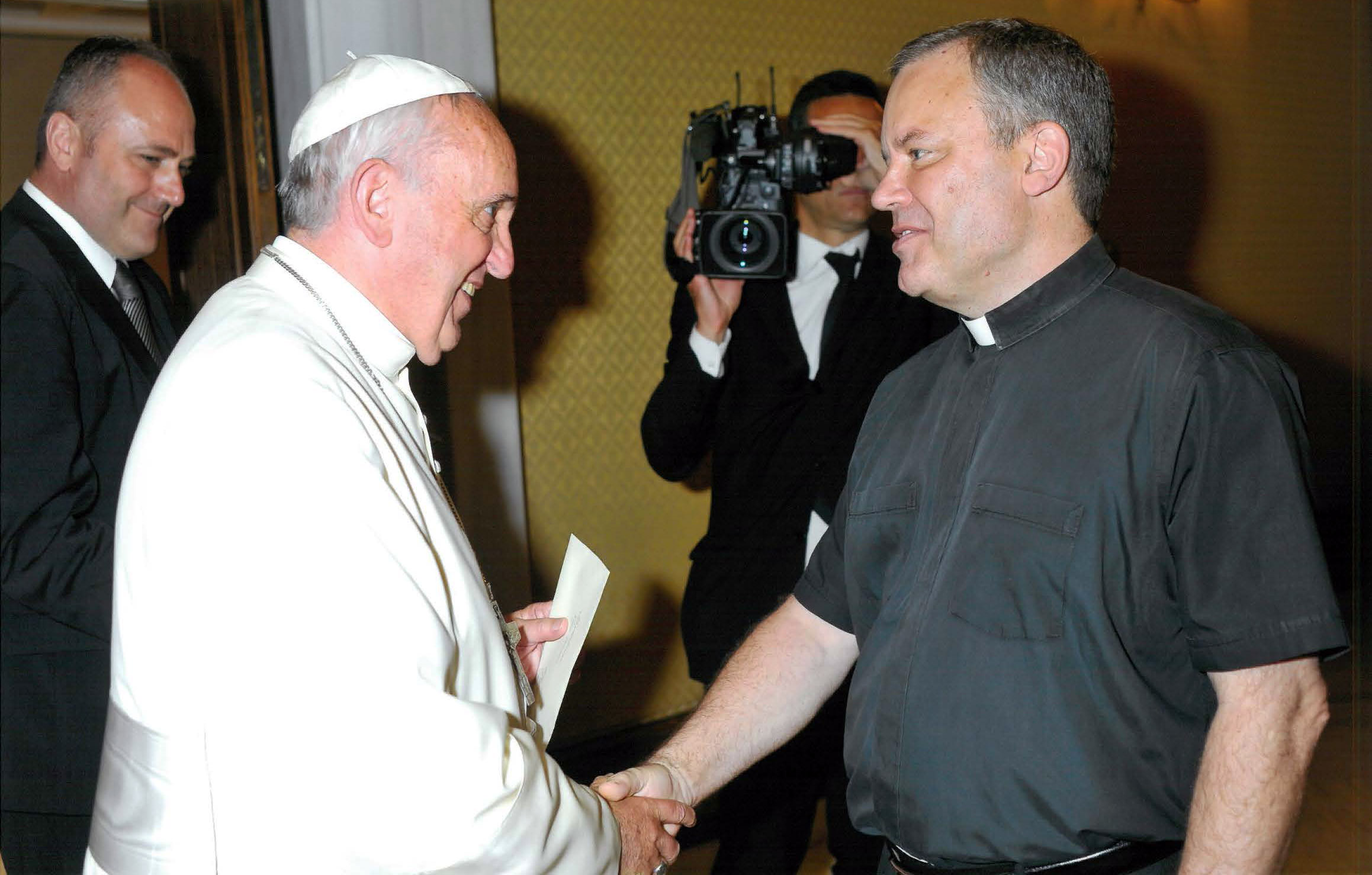 Father David Nicgorski, O.M.V., greets Pope Francis at the Vatican after he named the native Philadelphia priest to lead the Oblates of the Virgin Mary as the religious order's rector major.

Father David Nicgorski, O.M.V., a 58-year-old native of Philadelphia, was elected 18th Rector Major of the Oblates of the Virgin Mary during a July meeting of his congregation in Rome. He succeeds Father Sergio Zirratu who was Major Superior for the past six years.

Father Nicgorski was the provincial for the Oblates in North America prior to his election.

The Oblates of the Virgin Mary is a religious institute of priests and brothers founded by the Venerable Father Bruno Lenteri (1759-1830) in Italy in 1816 briefly as a diocesan congregation and reestablished in 1826 as a papal congregation. Although it is not affiliated with the Society of Jesus, a characteristic of the congregation is zeal for the Spiritual Exercises of St. Ignatius of Loyola and working mostly in spiritual direction and parish missions.

The son of the late Wallace and Patricia Nicgorski, Father Nicgorski attended St. Cecilia School in the Fox Chase section of Philadelphia, Our Lady of Good Counsel School in Southampton and Archbishop Wood High School, from which he graduated in 1974. He was the eldest of six in his family, followed by his brothers James, Stephen, Brian and William, and a sister, Maria.

He did not enter college or the seminary directly after high school, he explained in an interview with CatholicPhilly.com, and his father who was in the roofing construction business got him and his four brothers into the roofers union.

Although Philadelphia roofers are not especially noted for spirituality, beware of stereotyping. While he was not considering the seminary at that point, he was a committed practicing Catholic. While living in Holy Name Parish in the Fishtown section, he began to take spiritual direction from one of the Dominican Fathers who staffed the parish.

“I always attended church, but I had a spiritual awakening,” Father Nicgorski recalls. “A friend of mine told me about this seminary in Boston that was so good, I went there and I was accepted. I was 25, which would be considered a late vocation then.”

That was Our Lady of Grace Seminary, conducted by the Oblates of the Virgin Mary. After receiving his bachelor’s degree at age 25, he continued his studies at the Angelicum in Rome and St. John’s Seminary in Boston. He made his final profession as an Oblate in 1990 and was ordained to the priesthood in 1991.

Among his assignments, he was assistant pastor at St. Andrew Parish in Avenel, N.J.; program director at Emmaus House, a retreat facility in Perth Amboy, N.J., and diocesan director for youth and young adults for the Diocese of Metuchen, initially at the invitation of Bishop Edward Hughes, who was a former superintendent of Catholic schools in Philadelphia. This was followed by an assignment as director of the Parish Mission and Retreat Team at St. Joseph’s Retreat House in Milton, Mass.

Retreats are very much part of the Oblates’ charism and Father Nicgorski will be in the Philadelphia area in January to conduct a retreat at St. Charles Borromeo Seminary.

He was elected provincial of the St. Ignatius Province of the Oblates of the Virgin Mary in 2009 and continued in that post until his recent election as Rector Major for the entire congregation.

Now he will be based primarily in Rome but also in Boston and traveling around. The Oblates of the Virgin Mary are a relatively small congregation with about 200 members in Europe, North America and especially active in the Philippines and Nigeria. Vocations are strong with 11 men studying for the priesthood in the U.S. another 22 in the Philippines and 22 in Nigeria where applications are so many that most must be turned away.

It was Father Nicgorski’s pleasure to meet with Pope Francis in Rome recently, along with a group of his fellow Oblates.

“In my opinion he will be known as the Pope of Mercy,” Father Nicgorski said. “It was like a grandfather when he talked with us. He looked at me and said, ‘Train your priests to be solid but open to the people; people trapped in addictions, people trapped in bad lives.’ He told us when he visits prisons he tells Jesus, ‘I should be sitting behind bars, but you were merciful to me.’ I’m excited he is going to visit my home town.”

Father Nicgorski is also excited about his own vocation. As he begins his new role as head of his congregation, he confesses, “I tell people I am a very happy priest. My spirituality began by making retreats as a young man.”

NEXT: Ancient texts of biblical world on exhibit at Penn Museum