Ancient texts of biblical world on exhibit at Penn Museum 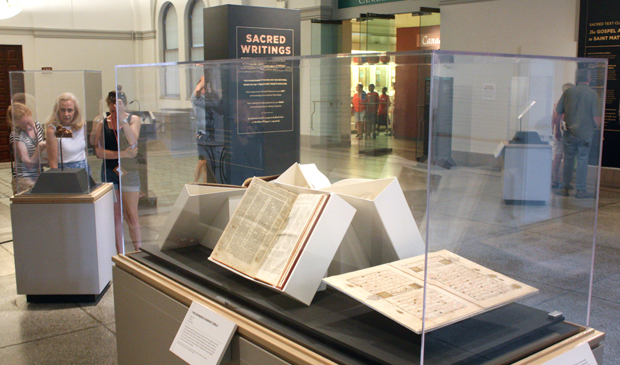 The Penn Museum, in conjunction with the Penn Libraries, presents "Sacred Writings: Extraordinary Texts of the Biblical World," a special exhibition of rare artifacts, rare books and manuscripts, through Nov. 7. (Photo by Penn Museum) 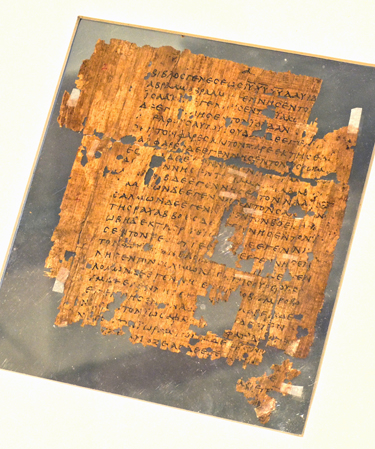 One of the world’s oldest fragments of the Gospel of St. Matthew, written on papyrus and dating to the third century CE, was once part of a codex (book). This fragment, written in ancient Greek, contains the beginning of the Gospel of Matthew (Mt. 1:1-9, 12, 14-20). (Photo by Penn Museum)

The University of Pennsylvania Museum of Archaeology and Anthropology, or the Penn Museum for short, is honoring the upcoming visit of Pope Francis through an exhibit running Aug. 15 through Nov. 7 titled, “Sacred Writings: Extraordinary Texts of the Biblical World.”

The exhibit draws upon its own holdings for the ancient items and for more recent centuries from the holdings of the University of Pennsylvania Library.

“The visit of Pope Francis and the World Meeting of Families provided the museum with an opportunity to put together a small but truly inspiring exhibition,” said Julian Siggers, director of the Penn Museum. “The displays are of enormous religious and historical significance, the beginning of a journey through the Bible-related galleries.”

Everyone knows the Bible story of Noah and the great flood from which only he and his family and a humongous assortment of animal pairs crowded onto a wooden ark and were saved from the wrath of an angry God to repopulate the earth.

What many people don’t realize is that the Noah narrative is one of several similar stories recorded by ancient peoples of varying religions and cultures. It is impossible to say which was first recorded because it was usually done on materials subject to decay, to the point that most of what has survived was mostly recopied many times over.

One medium that is practically indestructible is the clay cuneiform tablets of the ancient Sumerians, which trace back as far as 3500 BCE (Before the Common Era, an invention of secularists who couldn’t bear to say what it really means — Before Christ).

The Penn Museum has one of the largest holdings of cuneiform tablets in the world. This includes a flood tablet displayed in the exhibit that is from a site in Nippur, Iraq, and relates the Mesopotamian version of the story. It is relatively young for cuneiform, circa 1650 BCE, although the tale even at that time was ancient. 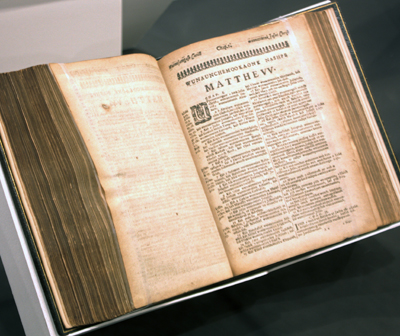 The first complete Bible printed in the New World, a translation of the Bible into the Native American Massachusett language, by Puritan missionary John Eliot, in 1663. (Penn Museum)

Also on display is a very fragile papyrus fragment from the third century AD which contains part of the Gospel according to St. Matthew.

Treasures displayed from Penn’s library collection date from before the invention of moveable type. They include an illuminated Latin Bible transcribed in 13th century Arras, France, and an illustrated manuscript copy of a world history up to the election of Pope Sixtus IV (1471). This volume and a 12th century Koran manuscript also focus on the Noah flood account.

Coming forward to printed material, there is a 16th century Hebrew Rabbinic Bible from Venice and a copy of the first Catholic Bible in English, printed in Rheims, France, in 1582.

Did you know the first complete Bible printed in the New World was not in English, Spanish or Portuguese? It was a translation into a Native American Language by a Puritan missionary, John Eliot.

Another monumental text displayed is a Bible printed in Nuremburg in 1599. It has translation of the New Testament into 12 languages side by side through two-page spreads — Syriac, Hebrew, Greek, Latin, German, Czech, Italian, Spanish, French, English, Danish and Polish.

But of course the special exhibit is just a mere taste of the treasures of the Penn Museum, which because of its location in University City rather than the downtown museum area doesn’t always get the notice it deserves. 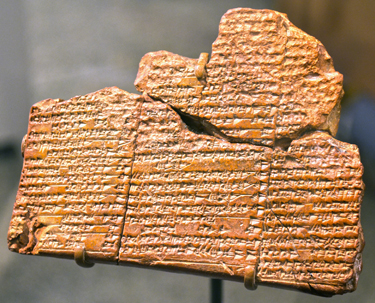 An ancient clay tablet in Sumerian cuneiform from the site of Nippur in Mesopotamia (now in Iraq), circa 1650 BCE, contains the earliest version of the Mesopotamian flood story. A version of this tale becomes incorporated into the Epic of Gilgamesh, and tells of a flood that destroyed humankind— the story closely parallels the biblical story of Noah. (Penn Museum)

The special exhibition is not large, but located as it is near the museum’s main entrance it is both metaphorically and actually a portal to the huge collection gathered by Penn’s archeologists and anthropologists over Penn’s 275-year history.

If you go, by all means explore the rest of the museum. It is well worth your time, and the kids will love the mummies.

The Penn Museum is located at 3260 South Street in Philadelphia. Read more about the Sacred Writings exhibit here.

NEXT: Maryland group will walk to Philadelphia for papal Mass