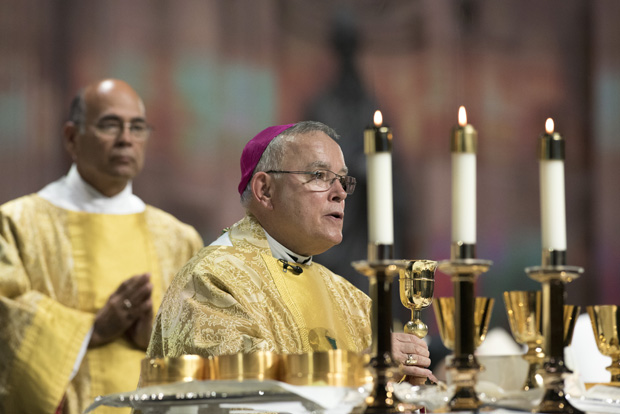 Archbishop Charles Chaput celebrates Mass to open the 133rd Supreme Convention of the Knights of Columbus Aug. 4 at the Pennsylvania Convention Center in Philadelphia. (Photo by Kaitlyn Landgraf) 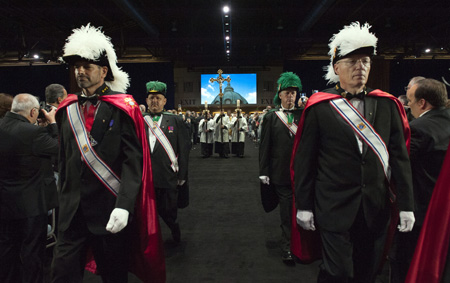 Knights of Columbus lead the way for the recessional of the opening Mass for the international gathering of the fraternal organization Aug. 4 in Philadelphia. (Kaitlyn Landgraf)

Approximately 2,000 members of the Knights of Columbus from around the country and abroad gathered Aug. 4 at the Pennsylvania Convention Center in Philadelphia to open the Catholic fraternal organization’s 133rd Supreme Convention.

The theme for the three-day convention was “Endowed by Their Creator with Life and Liberty,” paraphrasing the famous words penned by Thomas Jefferson in the same city 239 years ago.

The choice of words also played into a theme that would be echoed over the course of the convention — a new initiative of the Knights to raise awareness and funds for persecuted Christians in the Middle East.

The convention opened with due pomp and circumstance, including a procession by more a hundred prelates — 11 cardinals, 98 archbishops and bishops and another hundred or so priests who concelebrated Mass with Archbishop Charles J. Chaput.

Because Philadelphia’s Cathedral Basilica of SS. Peter and Paul would not be large enough for the congregation the Knights did the next best thing: the backdrop behind the altar in the convention hall depicted the façade of the cathedral, incorporating in its center an image of the Holy Family. That touch was also appropriate because “family” could be called a secondary theme of the convention.

This was very clear in the homily given by Archbishop Chaput, who used the opportunity to promote the upcoming World Meeting of Families in that same convention center on Sept. 22-25, followed by the visit of Pope Francis Sept. 26-27.

“It’s a joy to welcome you here to Philadelphia for this first chapter in the World Meeting of Families,” he quipped.

The first, which speaks of the jealousy of Miriam and Aaron toward Moses, focuses on the failings of the human family. The Gospel reading about how Peter’s doubt almost made him sink when he tried to walk on water toward Jesus, applies to the church as family.

“We are called to love and serve one another and to see the gifts and talents of our family members as gifts from God that can enrich us all,” the archbishop commented on the first reading.

As for the Gospel, he compared the reading to the boat of Peter when Christ calmed the storm. “We can be confident and comforted that Jesus will not abandon his church,” the archbishop said.

After the Mass Archbishop Chaput inaugurated this year’s Holy Family Prayer Program with the distribution of framed images of the Holy Family, which the Knights’ state deputies will take home to their jurisdictions to be used at prayer liturgies.

The program was begun in 1979, he explained, and since that time 17 million people have participated in more than 147,000 prayer services.

The framed images, which were blessed by Pope Francis, depict the same image as was on the altar backdrop. They are copies of a 17th century etching by Giovanni Batista based on a 16th century painting.

While most lay convention-goers were clearly senior members of their local branches of the Knights with many accompanied by their spouse, there were also a fair number of younger members that gave credence to the Knights as a family organization.

For example, Major Peter Thayer, in the dress uniform of an Army paratrooper from Fort Bragg, attended with his wife Melinda and six beautiful children aged 10 to 18 months — Kathryn, Reese, Emily, Evelyn, Kyra and Kilian, the youngest.

Thayer was invited to the convention to serve in an honor guard, he explained. As to why he is a Knight of Columbus, “I initially joined for the insurance,” he said, “but the fraternity really drew me in and I’ve been involved ever since.” 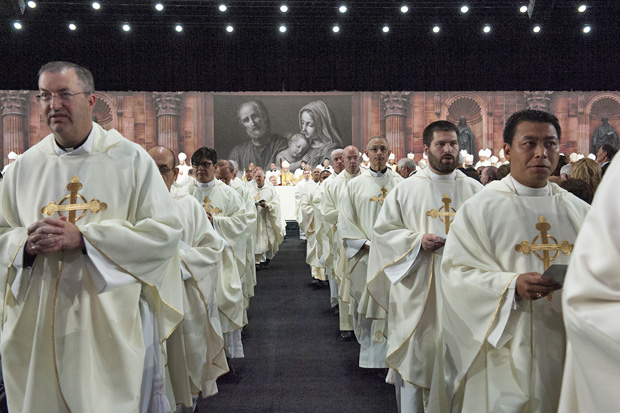 Some of the more than 100 priests, along with more than a hundred bishops, archbishops and cardinals, exit the exhibition hall at the Pennsylvania Convention Center Aug. 4 at the conclusion of the opening Mass of the Knights of Columbus’ annual convention. (Kaitlyn Landgraf)

NEXT: Transit plans during papal visit include road closures