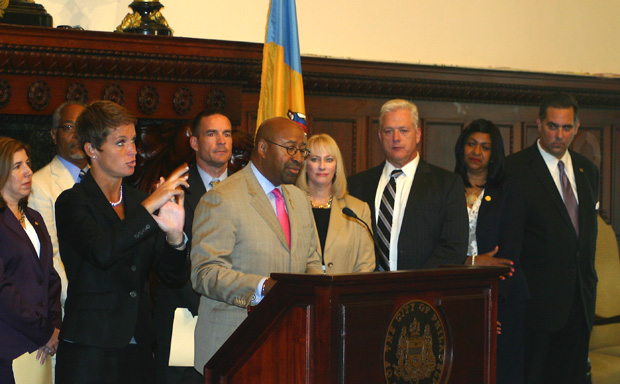 Philadelphia Mayor Michael Nutter, with World Meeting of Families Executive Director Donna Farrell at right, discusses transportation and security plans for the visit of Pope Francis in Philadelphia this September, during a press conference Aug. 5 in City Hall. (Matthew Gambino) 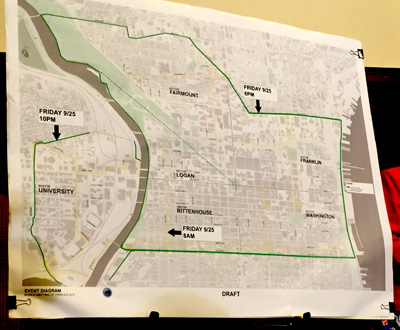 A map of center city Philadelphia shows the green outline of the “traffic box” in which drivers would face travel restrictions from Friday evening, Sept. 25 to Monday, Sept. 28.

See a larger version of the map by clicking here.

Philadelphia Mayor Michael Nutter and other officials described road closures, traffic restrictions and other transportation details Aug. 5 for the visit of Pope Francis to the city during the weekend of Sept. 26-27, which will conclude the World Meeting of Families Sept. 22-25.

An area described as a “traffic box” will be designated in center city from 6 p.m. Friday, Sept. 25. How long it will be in effect after the end of the papal Mass on the 27th, likely into Monday the 28th, has not been determined, depending on the number of people leaving the area of the Benjamin Franklin Parkway.

That is the location near the Philadelphia Museum of Art where the pope will celebrate the Mass for a projected 1.5 million people.

During that weekend cars will be allowed to travel within the traffic box and leave it but will not be allowed back into the perimeter. The restrictions include personal vehicles and any sort of bus — including motor coaches, school buses, mini buses, RVs and passenger vans with a capacity of eight to 14 people.

Pedestrians and cyclists, however, will face no restrictions leaving and re-entering the traffic box.

Only emergency vehicles will be exempted from the restrictions, and they will have designated travel lanes as streets begin to fill with pedestrians walking to the papal events.

The borders for the center city traffic box are as follows:

West Philadelphia will also have its own traffic box across the river beginning 10 p.m. Friday, Sept. 25. That perimeter includes: 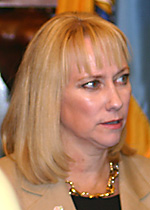 Donna Farrell of the World Meeting of Families said the papal visit Sept. 26-27 would be a “transformative and unforgettable moment on the world stage,” which people should enjoy and celebrate. (Matthew Gambino)

Nutter admitted the restrictions may incur challenges for those living or working in and around center city but he presented the information with optimism, noting that of any location in the world, Vatican officials in 2012 chose Philadelphia for the site of the World Meeting of Families that traditionally concludes with a visit by the pope.

Various city and state officials also presented information on how visitors would get to that stage on the last weekend of September.

One option for visitors from New Jersey put to rest some speculation that had arisen in recent weeks: the Ben Franklin Bridge, spanning the Delaware River from Philadelphia to Camden, will be closed 10 p.m. Friday, Sept. 25 through 12 noon Monday, Sept. 28.

John Hanson, CEO of the Delaware River Port Authority, said only emergency vehicles will be permitted to drive across the bridge. But pedestrians able to walk to Philadelphia will have free use of the span.

Those wishing to ride a train into town for the papal events should already have placed their name into a lottery for one-day papal passes on SEPTA’s Regional Rail lines, on Aug. 3.

Joe Casey, general manager of SEPTA, explained how the regional transportation agency intends to more than double its normal train passenger capacity, up to 350,000 for the weekend. The lottery system ran successfully, he noted, after an attempt to sell the passes online on July 20 crashed the SEPTA system, leading to the lottery as an alternative.

All winners of the lottery will be notified Thursday, Aug. 6, and will be required to use a link to pay for their pass on the SEPTA website by Sunday, Aug. 9. Any unsold passes will be distributed to those entrants who did not initially win the lottery.

Casey also noted that the Sharon Hill and Norristown High Speed Lines will be undergoing a similar lottery process due to projected high demand. The Airport line, he said, is the only line operating both inbound and outbound for the weekend for airline travelers.

Of all the travel options to the weekend’s events, bus transportation appeared the most effective, a point underscored by an analysis of projected visitors.

An early estimate last spring projected some 5,000 buses would carry passengers into the city. Assuming 60 passengers per bus, 300,000 could be expected to use that means of travel, especially on Sunday for the papal mass on the parkway.

Indeed, many parishes in the Archdiocese of Philadelphia, plus church groups from the Northeast and mid-Atlantic regions, and beyond, have signed up busloads of pilgrims. 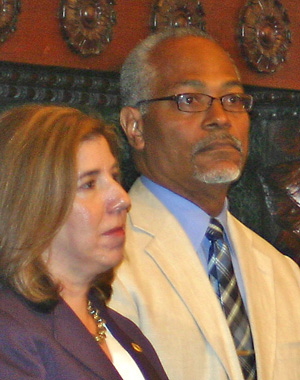 Cars could bring in thousands more people, but major highway closures would leave local roads as drivers’ only options. And once all those drivers arrive they would face challenge of parking. Buses will have priority ahead of cars, according to PennDot’s Richards. That means drivers would have to seek parking farther from the sites of events, requiring a longer walk into center city.

Richards added that all available parking sites would be used, including the South Philadelphia stadium sites and across the river in Camden, and that more information on road transportation will be announced in coming weeks.

The dilemma for cars makes transportation by bus, because of its high passenger capacity, the ideal way to get into the city that weekend.

“It is the most effective and efficient way to travel,” said Donna Crilley Farrell, executive director for the World Meeting of Families.

She stressed how important it is for all commercial buses planning to transport visitors for papal events to get registered as soon as possible. Buses must register at wmof.goground.com by Aug. 31, and the bus operator is responsible for registration.

However people come into the city for the papal events, Nutter said they should “be prepared to walk, for at least a few miles.” Food, water and other provisions in bags will be permitted at papal events, but they will be subject to security screenings.

Farrell noted that “all who wish to participate (in the papal events) can,” especially since it will be a “transformative and unforgettable moment (for Philadelphia) on the world stage.”

She echoed Nutter’s assertion that the city has often pulled off large-scale events and managed transportation and security issues. But the difference this time is, “we’re doing it all at once.”

With enthusiasm, she expressed confidence that “we’ve done it before, and we’ve got this. Let’s enjoy this and celebrate it.”

NEXT: Philadelphian led Knights of Columbus in remarkable era