In Milwaukee, ‘our focus is on mission,’ archbishop says 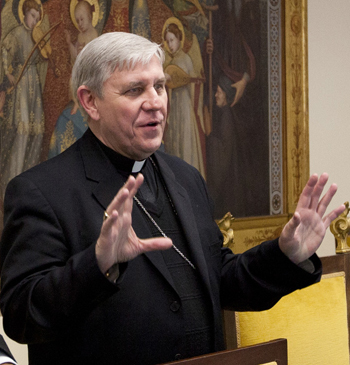 MILWAUKEE (CNS) — The Archdiocese of Milwaukee is “turning a page on a chapter in our history — a terrible part of the history,” Milwaukee Archbishop Jerome E. Listecki said Aug. 3.

“Now, we must continue doing the charitable, educational and spiritual work of the archdiocese. Our complete focus is on mission, but we must not forget those who have been harmed,” he said about the clergy sexual abuse crisis.

The archbishop made the comments in an interview a day before a $21 million settlement was reached for abuse survivors by the archdiocese and the Official Committee of Unsecured Creditors, which has sought compensation for victims/survivors.

The settlement is part of an agreement on a reorganization plan that now must be approved by a U.S. Bankruptcy Court judge.

Sitting in his office, Archbishop Listecki talked about the Chapter 11 bankruptcy reorganization that had consumed a large part — “four years and eight months,” he noted — of his time as leader of the Archdiocese of Milwaukee.

A lawyer and a pastor, the archbishop spoke in the tone of the latter.

He acknowledged that the abuse crisis has had an impact upon the archdiocese’s mission.

“Something I’ve consistently said is that the experience of the clergy sexual abuse has made us — through the stories shared by the victims — has made us, I think, a better church,” he said. “It has made us strong in many areas, and has helped us come to grips with our responsibilities, especially toward the young and the oversight that needs to be taken.”

He noted that as a result of the clergy sexual abuse crisis, the archdiocese has trained tens of thousands of people to protect young people, celebrates an annual Mass of Atonement, established a Community Advisory Board and Safe Environment Program, and has had its employees sign the Ethical Code of Conduct.

“All of these changes have been brought about as a result of this,” Archbishop Listecki said.

Betterment of the church goes beyond programs and events,” he said.

“You can’t say you’re a better church if it hasn’t strengthened your own spiritual life. By strengthening it I mean the devastation of the clergy sexual abuse is like being hit by a natural disaster,” he told the Catholic Herald, a publication serving the Catholic community in southeastern Wisconsin.

“Either you can throw your hands down and in depression just give up, or look to what God is directing you to do in the midst of that and to see him as your only hope and to look to reconciliation as providing a new moment, to understand our responsibility in trying to heal wounds,” Archbishop Listecki said.

“When you do that, your spiritual life is strengthened because you realize you’re helpless to do anything for a situation like this. But God can help you achieve whatever you need to achieve in order to bring wholeness and healing,” he added.

NEXT: A year after fatal shooting of black teen, faith shines in Ferguson