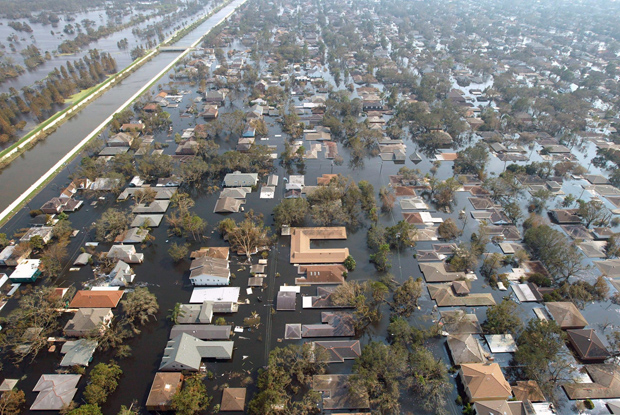 Houses in New Orleans are seen under water Sept. 5, 2005, after Hurricane Katrina swept through Louisiana, Mississippi and Alabama. More than a decade after the storm, New Orleans continues to rebuild. (CNS photo/Allen Fredrickson, Reuters) 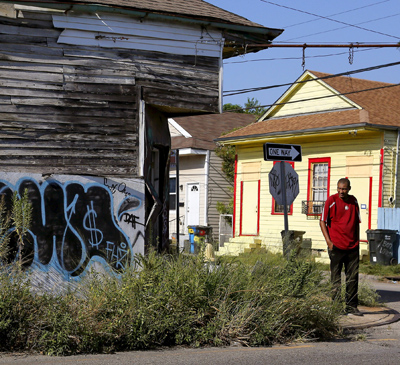 NEW ORLEANS (CNS) — They are calling it “Kat 10” — Hurricane Katrina plus 10 years — which carries with it the double meaning of an ominous meteorological warning.

How could a Category 5 storm that engulfed the entire Gulf of Mexico but dropped in intensity to a Category 3 just before landfall on Aug. 29, 2005 — burying one of the world’s most iconic cities in a flood of biblical proportions — become the watershed moment in New Orleans’ nearly 300-year history?

The more complex answer: In a city founded near the mouth of the Mississippi River by Jean-Baptiste Le Moyne de Bienville May 7, 1718 — and buffeted over the centuries by storm, flood, fire, yellow fever and Civil War — no single event has had the sudden, powerful and indiscriminate impact of Katrina.

And yet, 10 years later, New Orleans — in so many ways new and improved and utterly resilient — is a resurrection city.

“It is extraordinary when you look back now and see what has emerged and how life has been restored,” said now-retired New Orleans Archbishop Alfred C. Hughes, 82, who admits he was stunned when he took a helicopter flight over the massive flooding two days after the storm and then walked the city’s empty streets two weeks later.

“It was like a war zone. No sign of life. I mean, everything was gray — the vegetation. There were no insects, no birds and no human beings. No lights, no electricity. Seeing the city dead just took the inner breath out of me. It just seemed as though it was going to be impossible to recover from this.”

Katrina forced a diaspora of New Orleans’ half-million Catholics. Scattered across the country, with their homes, businesses, schools and churches inundated, they clung to CNN 24/7 and saw Lake Pontchartrain cascading through holes in the city’s interior flood-control canals. They tried to make sense of the searing images of human poverty and misery: the exiles who sought shelter at the Louisiana Superdome only to have it go dark and its mushroom roof peeled back by the winds;the refugees with few provisions at the convention center, pleading for a way out of town;water, water, everywhere. 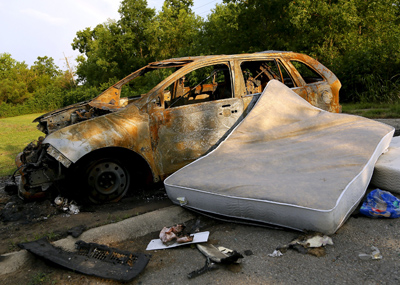 Displaced New Orleanians didn’t see, at first, what the first responders did: scores of bodies of those who tried to ride out the storm, floating in the water.

In Baton Rouge, Archbishop Hughes, bishop of Baton Rouge from 1993 to 2002, found shelter at Our Lady of Mercy Church, where he set up an emergency command center.

“I can remember going the first morning to the adoration chapel and just pouring out to the Lord my anguish and confusion and uncertainty about what to say and what to do,” he said.

The first two months after the storm were a blur, and obtaining accurate information on the whereabouts of loved ones was nearly impossible. Father Arthur “Red” Ginart, the pastor of St. Nicholas of Myra Parish in Lake St. Catherine, remained at his church and was swept away by the rising water. He was the only priest to die in Katrina.

Katrina forever changed the landscape of the Archdiocese of New Orleans. Before the storm, the archdiocese was home to 128 parishes and missions. Three years later, after two stages of restructuring, that number was down to 108.

There was a shared sense of loss. Across the region, 200,000 homes were destroyed or heavily damaged. Dozens of public, private and Catholics schools closed forever. But in the midst of the devastation, the Catholic Church jump-started the city’s initial recovery with a bold plan: open up as many Catholic schools as quickly as possible to provide families with a reason to return even when public schools were not ready to open.

The architect of the “big tent” plan, Father William Maestri, then superintendent of Catholic schools, said he was inspired by how Florida recovered following Hurricane Andrew in 1992.

Transition schools staffed by teachers who could return sprouted up within weeks in Metairie, which was far less damaged than New Orleans. Catholic schools accepted all students, including those who had attended public schools, and did not charge tuition. Students wore their old school uniforms. The schools platooned with morning and evening classes.

One of the many difficult decisions Archbishop Hughes faced was closing parishes and schools but a true resurrection story emerged from St. Frances Xavier Cabrini in Gentilly. After the school and church had been inundated by floodwaters, Cabrini parishioners agreed to sell the property to Holy Cross School, whose Lower 9th Ward campus also had been destroyed. Today, Holy Cross’ state-of-the-art campus sits on Cabrini’s land, thriving in enrollment for grades 5-12 and serving as a catalyst to the neighborhood’s comeback.

Archbishop Hughes said God remained present through the 40 million pounds of food distributed by Second Harvest Food Bank of Greater New Orleans and Acadiana in the four months after the storm, in the thousands of volunteers who came to help the rebuilding effort, and in the work of Catholic Charities to meet humanitarian needs.

New Orleans Archbishop Gregory M. Aymond, who came back to his hometown as archbishop in 2009, sees God’s blessings everywhere he looks.

“Where was God in the midst of Katrina?” Archbishop Aymond asked. “He was walking in the floodwaters, carrying people. He was in the attic, where people were dying. He was in the Superdome, where there was a lot of chaos. But he didn’t abandon us.”

“When you look back now and see what has emerged and how life has been restored — it is extraordinary,” Archbishop Hughes said.

In a June 20 letter to Catholics in the New Orleans Archdiocese and the city’s residents, Archbishop Carlo Maria Vigano, apostolic nuncio to the United States, conveyed greetings and “spiritual closeness” from Pope Francis on the 10th anniversary of Katrina.

“As you commemorate this anniversary, draw hope from the many signs of recovery,” he wrote noting that the storm took away buildings and lives but it “did not take away your determination to rebuild. Such perseverance is an expression of your faith in God.” 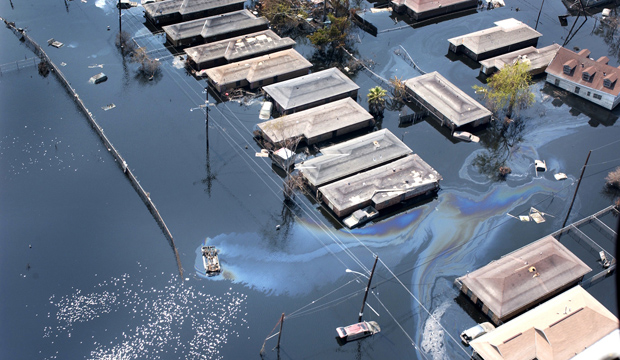 NEXT: Voting Rights Act at 50: Difficult questions remain on who gets to vote