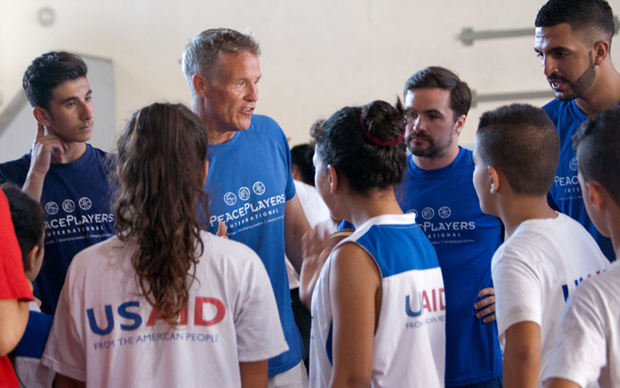 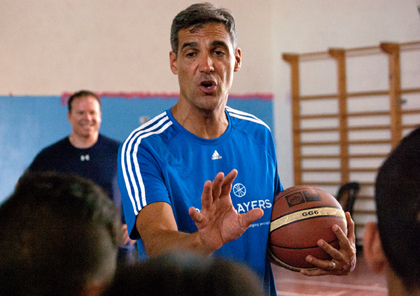 JERUSALEM (CNS) — Jerusalem is hot, especially in the gym of the Max Rayne Hand in Hand Bilingual School for Jewish Arab Education. Jerusalem is tense, too, with jolting violence this summer over dismantled settlement homes, gay rights and a brutal attack on a Palestinian family.

But those events did not keep Villanova University basketball Coach Jay Wright and Philadelphia 76ers Coach Brett Brown from heading to Israel to engage in peacemaking efforts with youth from PeacePlayers International, an organization that uses basketball to foster team play and tolerance in areas of conflict. Wright also brought his basketball-playing family with him.

The coaches found their way to Israel via Arn Tellem, president of the Detroit Pistons, who is on the board of PeacePlayers International.

“He suggested my family and I would enjoy the experience — he was right on,” said Wright.

PeacePlayers International is a U.S.-based organization that works in areas of global conflict, using basketball to bridge divides, change perceptions, and develop young leaders. It is supported by grants from the U.S. Agency for International Development and the U.S. State Department.

The visiting coaches conducted basketball clinics and conflict-resolution seminars in Jerusalem and Ramallah, West Bank, during a tightly packed week. 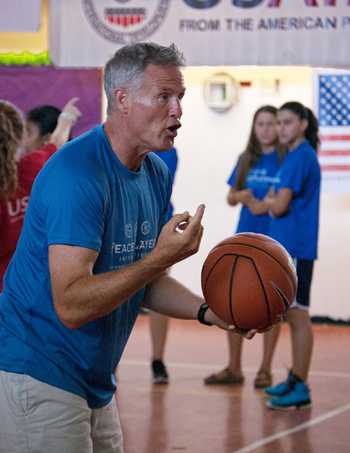 As the son of a retired New England high school basketball coach, Brown is not new to the idea of teaching kids important values through sports. His father, Bob Brown, taught drills, clinics and a disciplined regimen to basketball players as young as 8 years old.

“The history is breathtaking, so when PPI offered me the opportunity, I accepted immediately. … The concept of teamwork and playing together are common areas that cross-pollinate both coaching basketball and the PeacePlayers’ initiative,” said Brett Brown.

One of the basketball clinics was held in the West Bank, in a poor village near Ramallah without any sports facility or athletic equipment. The clinic made a big impact on both coaches.

“It was a first-time opportunity for these kids to learn skills and play basketball … and it was jaw-dropping for me,” said Brown. “Their eyes and expressions left an imprint that will not go away soon.”

After their interactions with Arab youth in the West Bank, it was on to Jerusalem’s Hand in Hand school.

Wright, his wife, Patty, and kids Reilly, 17, and Taylor, 22, joined Brown in coaching another clinic of mixed-race students and watched the results as Palestinian, Israeli and American high school players played a game together.

Just hours after the game, however, violence broke out in Jerusalem and the West Bank. A Jewish extremist knife-attacked marchers in Jerusalem’s Gay Pride Parade July 30, and 16-year-old Shira Banki died from her wounds days later. The same night of the parade, unknown Jewish terrorists firebombed the home of a Palestinian family in Douma, near Nablus in the West Bank, burning 18-month old Ali Saad Dawabsheh to death and severely injuring his parents and 4-year-old brother.

“The goal was to use the sport to enable Arabs and Jews to concentrate on the game of basketball — their skills and the needs of each other as teammates — and to look past the conflict and see each other as human beings” said Wright, “with the ultimate goal being to transform the relationships of Jews and Arabs in the younger generation.”

“We all realized how complex issues are in Israel and Palestine, how a majority on both sides wants peace … yet volatility and politics allow any incident, at any time, to escalate into war,” he added.

PREVIOUS: Dozens of Christians feared to be among 230 kidnapped in Syria

NEXT: Church leaders remind Iraqi refugees in Jordan they are not alone