Church leaders remind Iraqi refugees in Jordan they are not alone 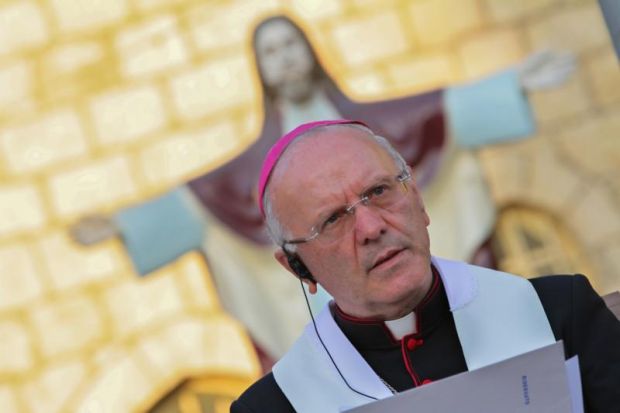 FUHEIS, Jordan (CNS) — A papal envoy and top Mideast Catholic leaders, including the patriarchs of Iraq and Jerusalem, reminded the world that the persecuted Christians of Iraq are not to be forgotten or abandoned.

The appeal came at a prayer service expressing solidarity with Iraqi Christian refugees made homeless a year ago by Islamic State attacks on Mosul, Iraq, and surrounding villages. Then, Christians were told to convert to Islam, be killed or flee. Approximately 12,000 of them are sheltering in Jordan.

Waving white, black and red Iraqi flags and their prayer service leaflets, the refugees sang in Arabic and in their native Chaldean and Syriac languages, imploring for peace to be restored to their homeland.

Pope Francis sent Bishop Nunzio Galantino, secretary-general of the Italian bishops’ conference, to tell the refugees that they are not alone.

“I want to reach through a word of hope those who are oppressed by violence, forced to abandon their homes and their homeland,” said the pope’s message, underscoring the “church does not forget or abandon its exiled children because of their faith.”

“Let everyone know that a daily prayer is raised for them together with thankfulness for the witness that they offer us.”

Pope Francis also called on the international community not be remain indifferent in the face of religious persecution.

“More than once I wish to give open voice to the atrocious, inhumane and unfathomable persecutions of those in many parts of the world and, especially of Christians, who are victims of fanaticism and intolerance under the eyes and the silence of all,” the message said. “These are today’s martyrs, humiliated and discriminated against because of their faithfulness to the Gospel.”

The gathering was held at the Latin-rite Catholic Church’s white limestone compound in this tiny Christian town, some 13 miles outside the capital, Amman. The Catholic charity, Caritas Jordan, which helps to care for the refugees, co-sponsored of the event.

Catholic leaders in the Middle East took to the podium to voice their support for the faithful. Among them were Chaldean Catholic Patriarch Louis Sako of Baghdad; Latin Patriarch Fouad Twal of Jerusalem; Bishop Maroun Lahham, the Latin Patriarchate of Jerusalem’s vicar to Jordan; and Chaldean Catholic Auxiliary Bishop Shlemon Warduni of Baghdad. The ambassadors to Jordan from the Vatican and Iraq also attended.

To show appreciation for Pope Francis, those in attendance sent a handmade white rosary to him.

Patriarch Sako lamented the extremism, terrorism and sectarian violence wracking Iraq since the aftermath of the 2003 war that toppled Saddam Hussein and its latest abhorrent form perpetrated by Islamic State. During this period, 1,265 Christians have been martyred in Iraq, including several bishops, he said.

“We need to see laws that will protect our religions and people of all faiths,” he told the Christians, who have often been caught in crosshairs between Iraq’s Shiite and Sunni Muslims.

He urged that all members of society be regarded equally before the law and that their human rights be recognized in his call for national reconciliation.

“Those forced from their homes must be allowed to return and live in freedom under established guarantees for their safety,” Patriarch Sako urged. People should be able to return to their churches and schools. He said forgiveness was imperative.

Various members of the refugee community offered prayers for the people, including for fellow Syrians, suffering from spiraling regional conflict.

As they intoned their prayers, the supplicants held incense, which was placed it in an opened censer at the end of each prayer as a symbol of all prayers rising like incense before the heavenly throne.

An Iraqi Christian refugee man from Mosul, Abu Ayad, told CNS that life in exile is extremely difficult. Using his familial nickname, the father of four said it is because of Islamic State that he and other religious minorities in Iraq have lost everything.

“It’s impossible to return home. America has the power and responsibility to solve the problem,” he said.

“Our homes, work, cars, everything were left behind in Iraq,” another former Mosul resident, Abu Miriam, told CNS at the prayer service.

“We cannot work in Jordan and so it is becoming more difficult to survive,” said the former owner of a large supermarket lost to Islamic State militants. “Our only hope is that we can rebuild our families’ lives somewhere else.”

As those in attendance marked a year from the start of the massive migration, international organizations have cut back on badly needed financial and material assistance to Iraqi and Syrian refugees, citing a lack of donations as refugee numbers continue to swell.

Several refugees held a silent protest during the event, demanding badly needed aid be given.

“The Holy Father invites international organizations not to abandon them,” he said.

The Catholic Near East Welfare Association, a papal agency for humanitarian and pastoral support, continues to fund educational and catechetical programs for children and health care assistance for the entire family, including counseling for all those refugees struggling to cope.

The international Catholic charity Aid to the Church in Need recently announced $4 million in additional aid funding to assist the bulk of displaced Christians inside Iraq with food and rent.