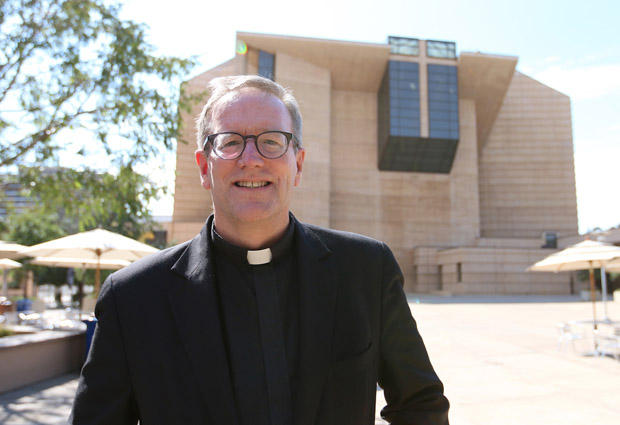 Father Robert Barron, who two weeks before his keynote address at the World Meeting of Families in Philadelphia, will be ordained an auxiliary bishop of Los Angeles.(CNS photo/J.D. Long-Garcia, The Tidings)

Almost as popular as Pope Francis himself is the first keynote speaker to address the World Meeting of Families: Bishop-elect Robert Barron, presently the rector and president of Mundelein Seminary in Chicago (the University of St. Mary of the Lake). He is the founder of the acclaimed Word on Fire web ministry and creator of the award-winning “Catholicism” video series.

Father Barron was appointed an auxiliary bishop of the Archdiocese of Los Angeles on July 21 by Pope Francis. CatholicPhilly.com interviewed the priest shortly afterward.

Q. First off, congratulations on your appointment as auxiliary bishop of Los Angeles. Is it OK to still call you “Father” Barron?
A. Yes, of course. At least until Sept. 8.

Q. Is that when you’re ordained as bishop? Was that timed to coincide with the World Meeting in September?
A.Yes, actually. There’s a big meeting of the American bishops with Pope Francis at the time of his visit, so it was decided that we should have (the ordination) out of the way so I could participate in that.

Q. Was the appointment expected? And will you still be working with Word on Fire?
A. No, it wasn’t; it was completely unexpected. I think I was in shorts and a T-shirt watching golf when I got the call — it was so completely out of the blue. And things with Word on Fire will, of course, go on, just with me from Los Angeles. That’s the great advantage of the medium and the digital age. So I’ll still be writing sermons and my weekly column and making a video for them to edit. And our “Catholicism: The Pivotal Players” series has six down, four to go. 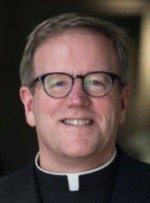 Q. The title of your talk is “Living the Image of God: Created for Joy and Love.” Did you choose this specifically, and do you think it will set the tone for the rest of the congress?
A. Most of the subjects were assigned to the given speakers, I think. My topic was chosen I suppose because the Congress wanted to start out on a positive note and not a hot-button issue. But I suspect that most of the other speakers will have written their talks some months in advance of me, so my own particular address isn’t likely to have an impact on what they say later on.

Q. The brief description offered by the World Meeting’s website describes “living in the image of God” as an “extravagant claim.” Can you go into a bit more depth on that?
A. Well, it is, isn’t it? Genesis puts forward a rather extraordinary claim that we are crafted in God’s image, which is unlike the claims of so many other religions’ creation stories. God, in fulfillment of that, even becomes man, to sanctify that image, which is also extraordinary. But the main thing I’d argue that we’ve lost sight of is how the story of creation is very much a missionary call to be Christlike in the roles of priest, prophet and king in the midst of creation — which is a responsibility, above all else.

Oftentimes we get so focused on the prominence of man’s role and creation in Genesis and his “specialness” as a reflection of the Creator that we neglect the heavier implications of what that means. In that sense, Genesis (chapter) One works a bit like a liturgical procession and hints at the responsibility of that role.

Q. How so?
A. In Genesis, God creates all things, and they come forth throughout the creation story each in their time. And there, at the end, God creates man and woman; they sort of appear at the end of the line in the way a priest would come in at the end of a procession into Mass, and it sort of follows (in my talk) that we have three missionary roles that proceed from Adam’s prominence as being created in the image and likeness: priest, prophet and king.

Q. Can you elaborate on this further? This is something that you’ve touched on in your Word on Fire talks.
A. Each and every one of us is essentially called to three roles in the missionary call of Genesis: to consecrate the world through the will of God and right worship (the role as priests), to speak the truth of God’s creation — Adam did this by naming the animals — pointing to our role as prophets. And lastly to order the world rightly, which is our role as kings.

Q. What obstacles do you see as preventing us from tackling that mission in the modern world?
A. Well, take your pick, I suppose. Much of our time is marked by a false sense of worship and a neglect of these roles, and our “kingly task” of ordering the world rightly. It’s a “me” society and tends to be very focused on ourselves. But our task according to Genesis and its missionary responsibility of being made in God’s image is not to look at creation, pat ourselves on the shoulders and say “good for me,” but rather to turn outwards and ask, “What is good for the world? What is good for my neighbor?”

Q. Do you feel that this touches on the recently released encyclical “Laudato Si” and Pope Francis’ concern for the environment?
A. Obliquely, yes. Not many people seem to realize that Genesis and the Bible are much more cosmologically focused that we are used to thinking. The Temple in Jerusalem which held the Ark of the Covenant was in fact covered by symbols of the cosmos and creation. In the modern day we tend to be more anthrocentric and focused on man and what he can “get out” of creation. But the Bible itself is an incredible cosmological document: it places man in the context of creation, rather than set apart from it.

Q. Will you be staying in Philadelphia for some of the other keynote speakers?
A. Unfortunately I am going to be leaving almost immediately after my keynote to go to Washington, D.C., and cover the World Meeting for NBC and the celebration of the canonization of Father Junipero Serra that’s going to take place there. But I will be coming back for the papal visit, and am excited to meet with my brother bishops, and be in Philadelphia. It is, of course, a wonderful city, and I’m a big admirer of your Archbishop Chaput, and think that he’s one of the great voices of the Church.

Q. I’d be remiss if I didn’t ask, given your penchant for baseball metaphors throughout your YouTube channel talks: Are you a Chicago Cubs or White Sox fan?

A. Cubs! It’s all where you grew up, though, I suppose.

NEXT: Let the children come to their own track of the World Meeting