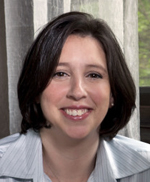 Raised as a conservative Jewish woman and married to a former Jehovah’s Witness, Naomi Shaeffer Riley knows all about interfaith marriage, which she will discuss in her World Meeting of Families breakout session titled “Called Together: Interfaith Marriage” on Thursday afternoon, Sept. 24 (4:15 to 5:15 p.m.)

Riley certainly has dealt with the difficulties that can arise when navigating an interfaith relationship, but she also emphasizes the positive aspects.

“In my view, the major benefit of interfaith marriage is … increasing tolerance and assimilation in America,” she said in a 2013 interview with National Public Radio. “What other researchers and I have found is that the more Americans get to know someone of another faith, the more they like them. And so interfaith marriage means that suddenly your cousin is a Muslim, or suddenly your uncle is a Mormon, or suddenly, you know, your sister-in-law is a Buddhist.

“And you know more — the fact that you know people of that faith actually gives you a more positive opinion of that whole faith. Interfaith marriage is basically serving as a catalyst for this long-time American tradition of religious toleration.”

Riley has previously written for the New York Times and has authored two books on the subject: “‘Til Faith Do Us Part:’ How Interfaith Marriage is Transforming America” and “Got Religion?: How Churches, Mosques, and Synagogues Can Bring Young People Back.” She is also a weekly columnist for the New York Post and a former Wall Street Journal editor.

In her session Riley will explore how faith affects some of the key aspects of married life, including how to spend time, how to spend money and how to raise kids.

When partners come from different religious backgrounds it can be a difficult territory to walk through. Riley explores these challenges, and how religious leaders and couples are rising to meet them.

Interfaith marriage is not the only social issue on the agenda for Thursday afternoon, but social justice as a whole. It’s not often that conference attendees can have a more personal interaction with a keynote speaker, but they expect just that during the Thursday afternoon breakout session of the World Meeting.

George Mason University law professor Helen Alvare will be leading a session titled “Building a Just Society: Catholic Social Teaching in Your Life” just one day after her keynote speech at the World Meeting, “Creating the Future: The Fertility of Christian Love,” which will take place Wednesday afternoon.

Alvare’s Thursday session will focus on social justice stemming from familial love. Catholic social teaching emphasizes following Jesus’ example in caring for the most marginalized in our society, and Alvare’s session seeks to examine how to live this out practically, especially within a family context.

The session will explore how to put social justice into practice by becoming a man or woman for others.

As a professor Alvare commonly teaches about the intersection of law and religion, particularly where it concerns the family. She is the founder of Women Speak for Themselves, an organization that advocates for women’s religious liberty in relation to reproductive rights, and she is a consulter to the Pontifical Council for the Laity at the Vatican.

Alvare is also an adviser to the United States Conference of Catholic Bishops and has published regularly in major news outlets such as the New York Times, Huffington Post, Washington Post and USA Today, and writes for America Magazine.
Much of her work focuses on topics including marriage, parenting, abortion and First Amendment religious clauses.

All the presentations for the Thursday afternoon sessions (4:15 to 5:15 p.m.) are in English except where noted (some with translations), and they include:

Rose Sweet: “’I Am with You’: Struggling with Divorce”

Ron Belgau and Beverley Belgau: “’Always Consider the Person’: Homosexuality in the Family”

Dr. Kyle A. Beiter, Cardinal Willem Jacobus Eijk and Dr. Gianna Emanuela Molla: “Out of the Depths I Cry to You, O Lord: The Heartbreak of Infertility” (in a mixture of English and Italian with simultaneous interpretation into both English and Italian)

Dr. Miguel Ángel Domínguez Mena: “The ‘Field Hospital’: The Church’s Responsibility to Make Christ the Healer Present to the Family and World” (in Spanish)

Dr. Christauria Welland: “When the Wound Comes from Within: Domestic Violence in Catholic Families” (in English with simultaneous interpretation into French)

NEXT: Los Angeles archbishop to speak on immigration at congress’ last day