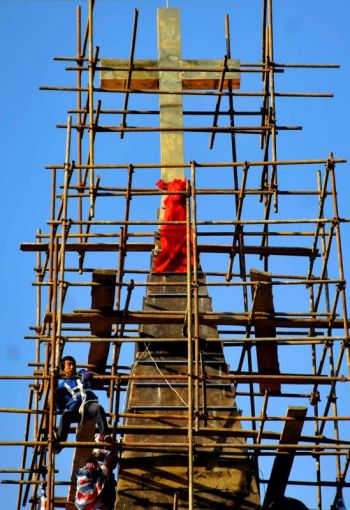 In this 2010 file photo, a worker climbs scaffolding surrounding a church in Qingdao, China. Two excommunicated bishops in China have ordained priests in separate ceremonies during the past two months. (CNS photo/Wu Hong, EPA)

Catholic leaders expressed concern over the ordinations, saying it was yet another example of the communist government tightening its control over the church.

Father Joseph Yue Fusheng of Heilongjiang, who was excommunicated by the Vatican in 2012 after he was illicitly ordained a bishop, ordained three priests in an Aug. 6 Mass at Sacred Heart Cathedral in Harbin. The ceremony was concelebrated by 31 priests and attended by about 500 Catholics.

On June 29 Father Lei Shiyin, excommunicated by the Vatican in 2011 after he was illicitly ordained a bishop, ordained a new priest and presided over the vows for two nuns during a ceremony in the newly built Sacred Heart Cathedral in Leshan.

Bishop Joseph Wei Jingyi of Qiqihar, the only Vatican-approved bishop in Heilongjiang province, told ucanews.com that “whoever consecrates or is being consecrated, their status is grave.”

“Yue Fusheng is an illicit bishop that the Holy See openly declared excommunicated. Whoever agreed to be ordained by him has ignored Yue’s illegitimacy and openly disobeys the Holy See,” the bishop said.

Another Catholic leader who spoke on condition of anonymity also said the young priests who defied the Vatican are putting themselves in a grave position.

“The faithful will not accept them. I wonder what their future will be,” he told ucanews.com.

“If similar incidents continue to happen, I also would suspect the government of increasing its control on the church, turning the church into a tool of the state to fulfill its political agenda,” he said.

At the June 29 Mass, Father Lei was joined by 18 concelebrants and more than 1,000 Catholics, including government officials.

“I have no intention to challenge the authority of the Holy See. I would not engage in any argument. But the China church has to pursue inculturation,” Father Lei told ucanews.com.

“If we mind every word that people say, it would hinder the development of our diocese,” he added.

The Vatican has excommunicated three of the eight illicitly ordained bishops in China, ucanews.com reported.

This was the second ordination Mass presided at by Father Lei since being excommunicated. He ordained four new priests June 29, 2012, the first anniversary of his illicit ordination.

The issue of independent ordinations has been a principal obstacle to peaceful relations between Beijing and the Vatican, which demands the right to name its own bishops. In some cases, when bishops are elected, their names are approved by the Vatican, and they are ordained validly and licitly. On Aug. 4, the new coadjutor bishop of Anyang Diocese was ordained with Vatican approval, becoming the first publicly consecrated Chinese bishop in three years.

The 2015 working plan by China’s State Administration for Religious Affairs said it would proceed with the election and ordination of bishops without Vatican approval.

NEXT: Vatican accepting applications from potential ‘missionaries of mercy’