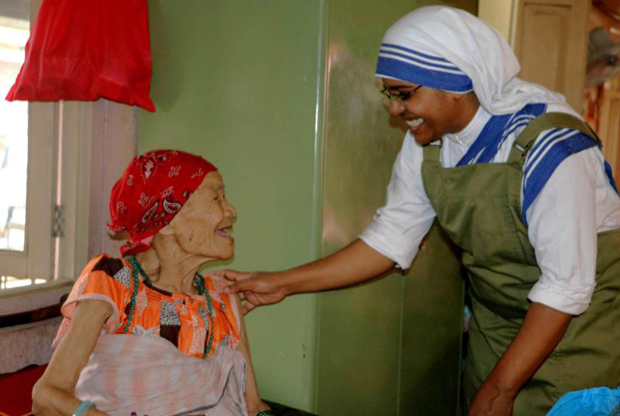 A woman smiles as she is greeted by Sister Marica of the Missionaries of Charity at a home for the elderly in the Pashupatinath temple in Kathmandu, Nepal, July 4. The nuns have been caring for the dying and the elderly sick at the destitute center since 1978, when Mother Teresa initiated the service at the Nepal's holiest Hindu temple. (CNS photo/Anto Akkara) 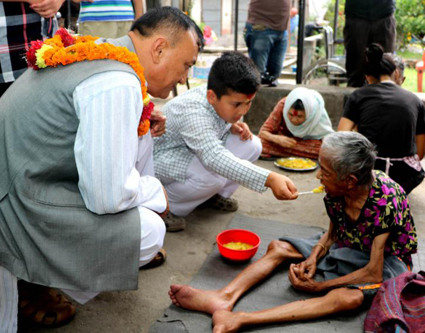 Since 2011, when a friend told him about the “wonderful service” the Missionaries of Charity sisters were offering to the dying elderly residents in a government-run center at the temple, Silwal has hardly missed a Saturday morning visit to Nepal’s holiest Hindu temple, on the bank of the Bagmati River.

It’s a day, he said, in which he can spend time doing good for others.

“I am not coming here as a devotee, but I love to join the sisters to care for the dying people,” said Silwal, a Hindu.

The temple’s social welfare center houses 220 people. It is located at the temple because Hindus believe that those who die there will experience instant salvation.

Shreebinda Khanal, center coordinator, said even those who die outside are taken into the temple for cremation.

Hours before Silwal and other volunteers gather at the center, three Missionaries of Charity sisters arrive at the sprawling temple complex from their nearby Mitra Park convent. The sisters, joined by the volunteers, bathe the residents and wash their clothing and bedding.

After the laundry is finished, lunch is served early, a Nepali tradition. The meal often is sponsored by local residents. Nursing and social work student interns join the volunteers in carefully feeding the sick and dying. In the afternoon, another group of volunteers and interns and three other Missionaries of Charity arrive to repeat the care.

Sanat Kumar Basnet, a retired police inspector general, sponsored the meal in honor of the 11th birthday of his youngest son, Bardan. As his son fed one of the residents, Basnet told Catholic News Service: “The work of the sisters is very inspiring. I want my son to have the spirit of social service from here.”

The Missionaries of Charity, who have been participating in the ministry since 1978, shy away from publicity, preferring to let their actions speak instead. But others are not hesitant to praise the sisters’ work.

“They (the sisters) bring joy here and inspire many with their dedicated work,” Khanal said.

While some have questioned the sisters’ work at the temple, Khanal said the government appreciates their service.

“They are not working for (to promote) any religion,” he said.

“Now the work of the sisters is much easier as lots of volunteers and government trainees come here,” said Shree Ram Phokarel, a Hindu who served alongside the sisters for 20 years. “In the 1990s, there were hardly any volunteers. The sisters had to do everything themselves.”

Prahlad Giri, a government official who retired in 2004 as the center’s custodian, told CNS the work of the sisters “has changed my attitude to life.”

“They are angels of love,” he said.

“One day, I was shocked to see Mother Teresa removing excreta with her hands,” Giri said, recounting a 1980s incident.

“I asked, ‘Mother, how are you able to do this?’ Mother told me: ‘If you care for them, you have to do all this.’ That changed my attitude. I started thinking. If Mother is doing like this, I should care for them more,” Giri said.

Maryknoll Father Adam Gudalefsky, who arrived in Nepal in 1977, told CNS the first group of four sisters were sent by Blessed Teresa of Kolkata upon his request.

“They began to visit and to help immediately,” Father Gudalefsky wrote in a July 29 email from Hong Kong, where he is based now.

“None except the MCs would see to the cremation and disposal of the dead bodies,” he said.

Missionaries of Charity Sister Amy, superior at the Mitra Park convent, was first sent to Kathmandu in 1993. She told CNS that “it was very tough and the conditions very challenging” at the temple.

“Now, doctors visit them regularly and give medicines. Those days there were no such facilities. We were giving nursing care and medicines we brought with us,” Sister Amy said.

While the sisters started the work at the temple from a rented house, Sister Amy said that “Mother (Teresa) was very keen that we stayed near the temple so that we can walk in easily.” 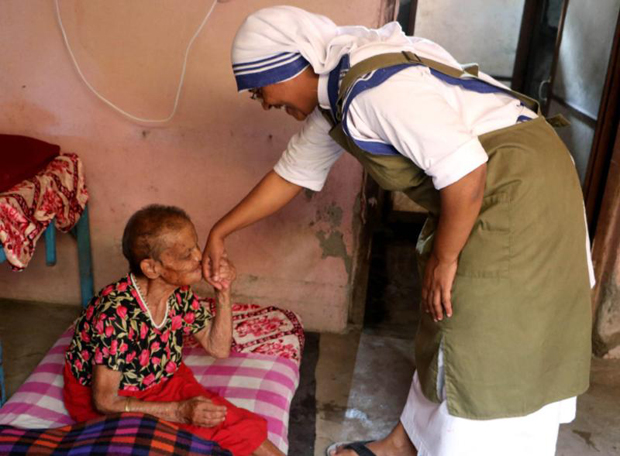 An elderly woman kisses the hand of Sister Marica of the Missionaries of Charity at a home for the elderly in the Pashupatinath temple in Kathmandu, Nepal, July 4. (CNS photo/Anto Akkara)

PREVIOUS: Pope to America: Don’t take this the wrong way, but…

NEXT: Divorced and remarried are not excommunicated, pope says at audience