Popemobile shipped to U.S. ahead of pope’s arrival 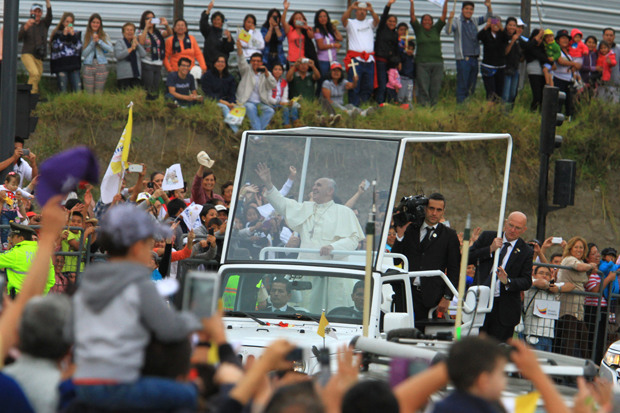 Pope Francis greets the crowd from his popemobile, a Jeep Wrangler, as he arrives in Quito, Ecuador, July 5. The pontiff will use the same model during his visit to the United States in September. (CNS photo/Robert Puglla, EPA) 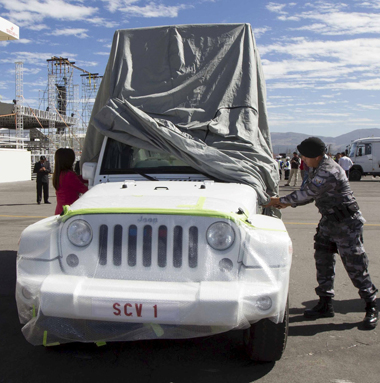 A police officer in Quito, Ecuador, June 30 covers the popemobile used by Pope Francis during his July 5-8 visit to the country. (CNS photo/Guillermo Granja, Reuters)

VATICAN CITY (CNS) — More than a month before Pope Francis was scheduled to arrive in the United States, his ride landed on U.S. shores.

“A Jeep Wrangler will be used as the popemobile in the USA (like the one used in Ecuador in July 2015),” the Vatican press office said in a statement Aug. 20.

Of course, an official said, there will be more than one. Pope Francis will need a popemobile in Washington, New York and Philadelphia, and besides, “there is always a reserve” in case of malfunction.

The vehicle or vehicles, the Vatican said, have “already been given to the Secret Service” for safekeeping before the pope’s arrival. An air cargo company is used for sending the popemobile abroad before papal trips.

The Vatican’s popemobile fleet has included vehicles from Mercedes, Toyota, Isuzu, Kia, Hyundai and Land Rover as well as Jeep. And in the Philippines in January, locals adapted their typical “jeepney” bus into a popemobile.

A popemobile, with either open sides or bullet-proof glass sides, gives the pope elevation as he rides through a crowd, making it easier for more people to see him.

NEXT: Pope sits in the pew at daily Mass in Rome