Grotto highlights homelessness and Mary as ‘untier of knots’

A crowd gathers for the dedication of the "Knotted Grotto" Sept. 3 at the Cathedral Basilica of SS. Peter and Paul. Each knotted strip of fabric represents a prayer, and 30,000 have been collected. They call to mind members of society for whom Pope Francis focuses much of his concern. (Sarah Webb) 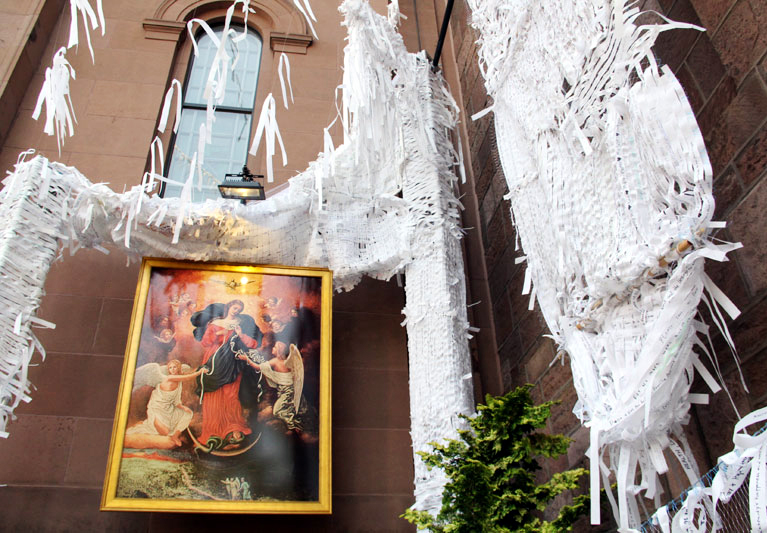 A painting of Mary, the Mother of God, depicts her untying the knots of people’s lives. The devotion is a favorite of Pope Francis, who will see the grotto and painting when he visits the cathedral Sept. 26. (Sarah Webb)

As the excitement over preparations for the visit of Pope Francis to Philadelphia was building on Thursday, Sept. 3, just 23 days before his Sept. 26 arrival, it seemed fitting that in front of the Cathedral Basilica of SS. Peter and Paul would be a visible representation of the pope’s favorite religious image: “Mary, Undoer of Knots.”

“The Knotted Grotto” is a dome-shaped lattice-work frame that stands about 10 feet high with an approximately 20-foot circumference that was dedicated Thursday morning with prayers led by Father Dennis Gill, rector of the cathedral, and remarks from Imam Abdul-Aleem, of the Masjidullah Mosque in Philadelphia.

The grotto, which can be entered through an opening so that petitioners can tie white, ribbon-like strings from the inside and outside, already has 3,000 knots each representing prayers of petition.

Project HOME, the Philadelphia organization serving homeless people in the city, has been collecting the pieces of cloth on which petitions are written throughout the Philadelphia and Camden, N.J., regions.

Over the past several months the group canvassed prisons, soup kitchens and workshops, collecting a total of 30,000 petitions that reflect poignant prayers for topics ranging from personal issues to social justice to health concerns.

A few examples include: “I am asking for prayers for my whole family;” “Let there be food for all … bountiful food for all;” “More faith in God and more belief in God’s love;” “For school communities, that students, teachers/professors can come together and share school pride and values.”

One prison inmate penned his hope to be free of addiction and be able to make a life for himself once released. Some petitioners asked for healing from anxiety or cancer, or other physical and mental disorders.

Project HOME commissioned artist Meg Saligman to create the grotto to help draw attention to those in need, especially members of society for whom Pope Francis focuses much of his concern.

“We invited Meg to create this work of art so that people will be moved to acknowledge a higher power and to also acknowledge the power within themselves to act,” said Mercy Sister Mary Scullion, executive director of Project HOME. “We need God’s grace to untie the knots.”

Members of the organization, wearing yellow T-shirts with blue lettering with the message, “Act with Mercy, Seek Justice,” were scattered throughout the crowd asking those who attended to sign petitions that will be sent to Congress, urging its members to act in a bipartisan fashion to alleviate homelessness and hunger.

Donna Crilley Farrell, executive director of the World Meeting of Families, told the crowd that she and her coworkers watched the progress of the artwork installation from her office. She said that helping the poor was a priority for both Pope Francis and Archbishop Charles Chaput.

“As I look at the thousands of knots in this grotto, it just takes your breath away,” she said. “Each of these knots represents the hopes and prayers of the people. It is incredibly moving. People from around the world will be able to share in the artwork” during the World Meeting and the papal visit, Farrell said.

Imam Abdul-Aleem said after the ceremony that his mosque received funds from Project HOME that enabled him to expand his ministry of feeding people of all faiths who are in need.

During his remarks, he asked God to bless and loosen the knots that represent human struggles.

“We pray that the visit of Pope Francis will be a transformative moment in the history of mankind, a moment to undo the knots of racism, classism and sexism that kept many people at arms-length of society,” Abdul-Aleem said. “True religion is not rituals. True religion is a recognition of God’s grace, but also the power we each have within us to make a difference.”

Heather Bargeron, a volunteer for Project HOME, said that the Francis Fund has collected $2 million of its $4 million goal.

At the end of the ceremony, representatives from Project HOME showed off a beige wool shawl dotted with knots woven to represent the struggles of each person who contributed to the shawl’s creation. The organization hopes to present the shawl to Pope Francis when he visits the grotto on Saturday morning, Sept. 26.

NEXT: Pope Francis will lead the parades in Philadelphia