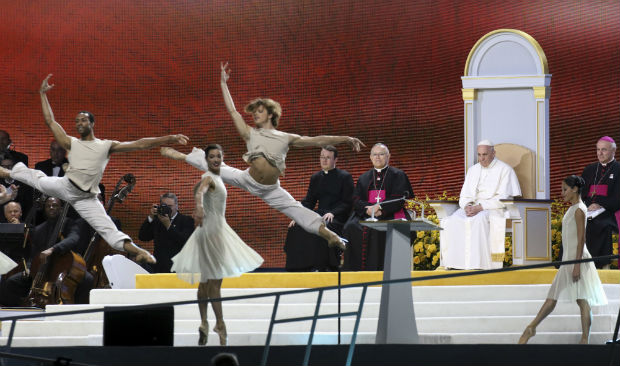 Pope Francis looks on as members of the Philadelphia Ballet perform at the Festival of Families during the World Meeting of Families in Philadelphia Sept. 26. (CNS photo/Gregory A. Shemitz) 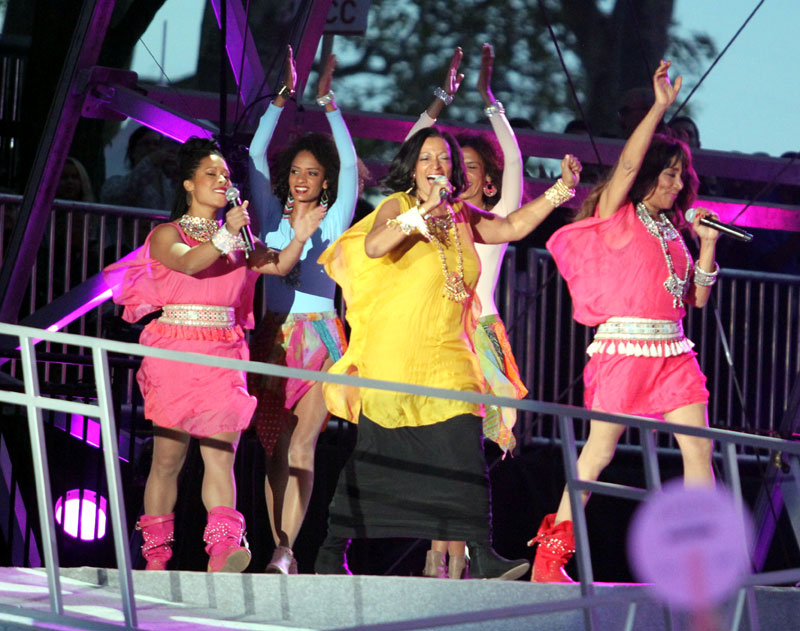 Sister Sledge performs during the Festival of Families. (Sarah Webb)

At the close of the first day of his visit to Philadelphia Sept. 26, Pope Francis was most animated toward the end of the Festival of Families, speaking energetically, gesturing and smiling at the sea of people in front of him who had gathered for a night of song, testimonials and prayers.

(See a photo gallery on the festival.)

Following days of gentle admonitions to such dignitaries as President Barack Obama, the United States Congress, and representatives from around the world at the United Nations, it seemed that the 78-year-old pope, on his last leg of his visit to America, took in the message and meaning for the World Meeting of Families in Philadelphia.

Before leaving the stage set up for the festivities along the Benjamin Franklin Parkway, Pope Francis, with a wide smile and enthusiastic gestures, told an audience of hundreds of thousands who lined the parkway that the families such as those who attended the World Meeting of Families create a beauty that leads all to God.

(See more photos on the pope’s arrival and motorcade through the city.)

“Jesus likes most to knock on the doors of families who love each other. Beauty and trust lead us to God,” he said, adding that the faith he saw displayed before him reflected a a real witness to the worth of being a family.

Flanked by Archbishop Charles Chaput and other dignitaries, the pope sat on the stage to watch performances by the Philadelphia Orchestra, Sister Sledge singing “We are Family” and Aretha Franklin belting out her famous blues rendition of “Amazing Grace.”

Interspersed with the music were testimonials by six families from various countries whose stories told of keeping the faith while enduring trials such as poverty, persecution, disabilities and political upheaval. 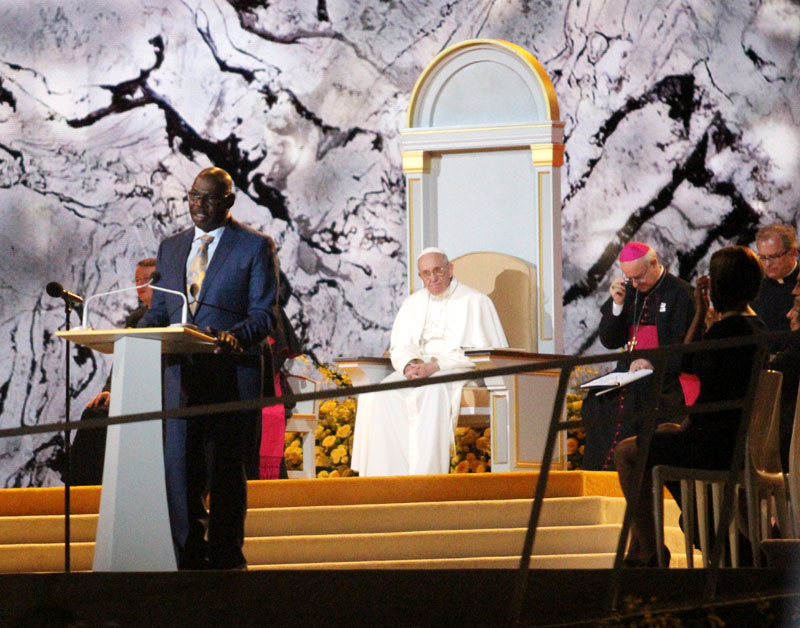 Pope Francis listens to Herb Lusk, a Christian pastor and former Philadelphia Eagle, proclaim a reading from the Gospel of Luke, on the parable of the prodigal son. (Sarah Webb)

One woman brought her two grown sons to the stage, one of whom plans to study for the priesthood and the other a 17-year-old handicapped by cerebral palsy. The Ukrainian-born woman was a single mother who brought her children to the United States and struggled for years after her husband abandoned the family.

She clung to her faith for guidance and even now rejoices in that her afflicted son, who is in a wheelchair, refuses to be limited by his handicap, keeping up with his studies with an eye toward going to college.

“I am happy to have my two sons in my life. Holy Father, thank you so much for being with us today,” she said.

Following her comments, the pope rose to greet her and her older son, then embraced the younger teen.

A Jordanian father, mother and two daughters also ascended the stage and the father told the pope and the audience about the thousands of Christian refugees who have flooded his country, fleeing persecution in their own lands.

He said his family welcomed the strangers and he, along with his fellow Christians, work to provide food, shelter, medicine and education to the dispossessed.

Some in the audience, like center city Philadelphia resident Marita Thomas, were moved to tears as they listened to each family and how they coped with hardship by clinging to God.

“This breaks my heart and now I see the need to help others here and overseas,” Thomas said.

The chilly air caused some spectators to bundle up. Many had blankets that they wrapped around themselves or their children. But most were determined to stay until the end, near 11 p.m.

“I will stay as long as I can make my train back home,” said Frank Jackson, who brought his wife, his mother and his four children to the festival from West Chester. ‘This is beautiful and it is a once-in-a-lifetime event. How many times can a whole family host their Holy Father?”

Many at the papal events had long walks from various train stations because SEPTA limited both fares and the number of stations where pilgrims could board the trains.

Mary Gabel’s journey from the Mayfair section of Northeast Philadelphia was a circuitous one, but worth the trouble, she said, because she wanted to see Pope Francis, Archbishop Chaput, and singer Andrea Bocelli, whose voice wafted through the audience as he performed “The Lord’s Prayer.”

The Festival of Families was free for those who had tickets, and for the many others who lined the parkway to hear the soaring music and inspiring words filling the night.

PREVIOUS: Pope encourages immigrants, and their gifts, in Philadelphia speech

NEXT: Papal motorcade winds through city to acclaim of crowds