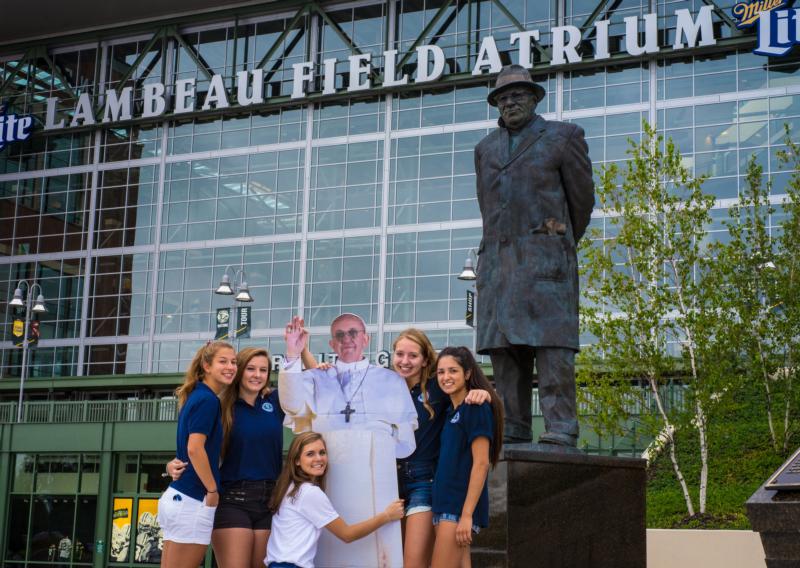 Students from Notre Dame Academy in Green Bay, Wis., are pictured outside of Lambeau Field with a cutout of Pope Francis Sept. 7. Green Bay Mayor Jim Schmitt had hoped that Pope Francis would celebrate a Mass on the Green Bay Packers' playing field as part of his U.S. visit. (CNS photo/Sam Lucero, The Compass)

It was right around March 1, 2014 — a month before April Fool’s Day — when the city’s mayor wrote his letter to Pope Francis.

“During your visit to the United States for the World Meeting of Families in 2015, I invite you to extend your visit to the Greater Green Bay community and make (a) pilgrimage to the Shrine of Our Lady of Good Help,” wrote Schmitt.

The letter was just the beginning.

In an interview with The Compass, two days after emailing his letter to the Vatican, Schmitt said the invite was anything but a pipe dream.

“It comes back to why not Green Bay?” Schmitt told Green Bay’s diocesan newspaper. “It just seems that there’s a whole lot of synergy with what the pope speaks and what the greater community of Green Bay believes.”

There were billboards erected around the city and a website, www.popetogreenbay.com, encouraged people to sign a petition asking the pope to make Green Bay a stop on his U.S. pilgrimage.

“Dear Holy Father, your visit to the Green Bay community would be an estimable blessing that would continue to lift the lives of the people of Green Bay. I thank you and pray for your continued service in truth and love,” the petition stated.

Despite the groundswell of enthusiasm and grass-roots planning, a visit by Francis to Packerland was not in the cards. Instead, papal pilgrimage planners added stops in New York and Washington before the World Meeting of Families in Philadelphia Sept. 26 and 27.

In a recent email interview, Schmitt said he had “absolutely no regrets” about inviting the pope to Green Bay.

“This initiative brought our community of all faiths and ages together to promote all of the good in our community and showcase Green Bay to the pope and, quite honestly, the world,” he said.

While the idea received some criticism, Schmitt said it goes with the territory. He added that bringing the pope to Green Bay to visit the Shrine of Our Lady of Good Help “is still a top priority.”

While Schmitt won’t have the opportunity to see Pope Francis celebrate Mass at Lambeau Field, he is looking forward to watching news reports of his visit. “I have been invited to Washington when the pope visits. However, due to my schedule, I will not be able to attend,” he said.

If he had a chance to ask the pope one question, Schmitt noted, “I would ask the Holy Father, ‘What one thing can I do to ensure that my family and friends go to heaven?’

“If I were allowed a second question, it would be, ‘When can you visit Green Bay?'” he added.

In the spirit of Schmitt’s “Pope to Green Bay” campaign, The Compass decided to show Pope Francis what he is missing. The newspaper conducted a papal tour of Green Bay with a cardboard cutout of Pope Francis standing in for the living and breathing pope. The cutout, property of the Department of New Evangelization, made stops at St. Francis Xavier Cathedral, Lambeau Field, the Shrine of Our Lady of Good Help and the Micah Center.

The locations were chosen because of their importance to the community and to the spiritual life and outreach ministry of the church.

— St. Francis Xavier Cathedral: Pope Francis would have celebrated Mass here, along with Green Bay Bishop David L. Ricken and many other bishops and priests from Wisconsin.

— The Shrine of Our Lady of Good Help: It is home to the only approved Marian apparition in the United States and Pope Francis would have surely spent time here in prayer.

— Lambeau Field: Home to the Green Bay Packers and a shrine of sorts in its own right. It would have been the site of a public papal Mass. If 70,000 people can fill the seats for a football game, surely a sold out crowd would have come to pray with Pope Francis.

— The Micah Center: The newest Catholic outreach ministry to the area’s homeless population sounded like a perfect location to take Pope Francis. If the pope ever makes a stop in Green Bay, no doubt he would visit one of the area’s many facilities that feed the poor and shelter the homeless.

The Micah Center, part of St. John the Evangelist Homeless Shelter ministry sponsored by the Diocese of Green Bay, is a daytime shelter and resource center that offers job-seeking services. It’s the kind of place that would put a smile on Pope Francis’ face.

NEXT: U.S. Latinos, Latin Americans to get special welcome to world meeting