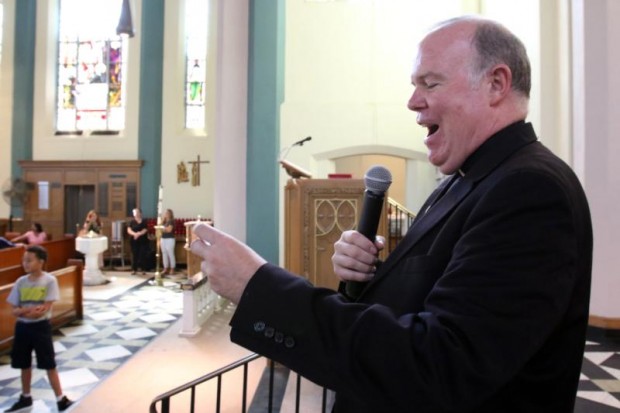 Father Michael P. Kerrigan, parish pastor, announces a winner in a raffle for papal tickets following a Mass at St. John-Visitation Church in the Bronx borough of New York Sept. 13. The parish held a special drawing to select parishioners who will receive tickets to Pope Francis' Mass at Madison Square Garden in New York City Sept. 25. (CNS photo/Gregory A. Shemitz)

RYE, N.Y. (CNS) — Dust off the raffle barrel! Bring it to the front of the church! There will be winners today!

At the intersection of arithmetic and justice, pastors in the Archdiocese of New York are conducting distinctive raffles to distribute the limited tickets allocated to each parish for the Sept. 25 papal Mass at Madison Square Garden.

Father Michael P. Kerrigan, pastor of St. John-Visitation Parish in the Bronx, had 10 tickets to spread among parishioners of his newly merged parish in the Kingsbridge neighborhood. He located the classic Lucite raffle barrel in the garage of the church he has served for almost two years. With the careful application of a cardboard patch and some duct tape, it was the perfect vehicle for the advertised raffle.

At the end of each Mass the weekend of Sept. 12 and 13, an usher emptied collection envelopes from the locked offertory bag into the drum. Father Kerrigan chose two winners at each Mass. On Saturday night, two students from St. Joseph’s Seminary who spoke at the Mass were pressed into service to move the barrel into place and turn it to mix the entries.

Helen Ferris was the first winner. A lifelong parishioner who was baptized in the church, Ferris was surprised at her good fortune and delighted for the opportunity to attend the Mass. This will be the third pope she will see in New York. In 2008, she waited on Fifth Avenue for hours to get a glimpse of Pope Benedict XVI.

At the 10 a.m. Mass on Sunday, winner Veronica Rodriguez said she was so emotional her eyes watered. “Oh, my gosh! I had prayed to win,” she told CNS. She said she told other members of her prayer group it was a sure sign of a true and living God. “When you ask, he will give it to you.”

Father Kerrigan said he thought the parishioners might appreciate a little drama, akin to the presentation of hockey’s Stanley Cup. Ultimately, he was looking for a good and fair way to acknowledge loyal parishioners who come to church each week, he said.

The Archdiocese of New York claims more than 5.8 million parishioners in 294 parishes in 10 counties. Madison Square Garden holds approximately 20,000 people. Catholics in neighboring dioceses in New York, Connecticut and New Jersey also are interested in attending the Mass. Those dioceses will get share a modest number of tickets. But don’t get out the calculator: Not all of the tickets are earmarked for parishioners.

According to archdiocesan Joseph Zwilling, archdiocesan director of communications tickets allocated to parishes were based on average Sunday Mass attendance. Parishes affected by a widespread merger during the summer received “the total for the average of the two previous unmerged parishes,” he told CNS.

Anecdotal information suggests ticket allotment ranged widely, from a low of 10 to a high greater than 50. Some parishes used a first-come, first-served call-in system; others set aside a few for staff and trustees before opening a lottery; many went directly to a raffle.

Msgr. Donald M. Dwyer, pastor of Resurrection Parish in Rye, recruited Pope Francis to help. Actually, Msgr. Dwyer placed a life-size cardboard cutout of the pontiff in front of the pulpit to oversee the bowl in which people put their names.

He said more than 250 people entered for a chance to win a set of three tickets, “far surpassing anything in my wildest dreams,” Msgr. Dwyer said. He chose a lottery to offer tickets to a cross section of the suburban parish and make the process “completely democratic,” he said. Distributing them in threes is a way to help families attend Mass together, he said.

Two schoolchildren and the parish secretary helped the pastor pick the 17 winners out of the bowl. He heard screams of excitement when people received the good news over the phone, he said.

Cheryl Committo, administrator at Holy Name of Mary in Croton-on-Hudson, said an announcement was made at Masses that 10 tickets were available and interested people should call the parish office. “I wanted it to be transparent and I didn’t want to attract people skimming through parish websites looking for tickets. I felt they should go to our parishioners,” she said.

Callers’ names were checked against the parish roster and put into a “Whom Shall I Send” jar Committo decorated with a picture of Pope Francis. Father Brian Brennan, the pastor pulled the names of winners of five pairs of tickets.

Tickets will not be delivered to the parishes until the week of the papal Mass. Lottery entrants at each parish were advised to be prepared to get themselves to Madison Square Garden via public transportation and plan to spend the afternoon and evening there.

In addition, Father Kerrigan reminded potentials winners that the tickets had to be used by themselves or family members and not sold.

Some of the 80,000 tickets offered by the city of New York for the papal motorcade through Central Park en route to the Mass have been offered for sale on Craigslist and eBay. In a statement, Cardinal Timothy M. Dolan of New York said to attempt and resell the tickets and profit from the pope’s time in New York “goes against everything Pope Francis stands for.”