‘No justification whatsoever’ for lack of housing, pope says 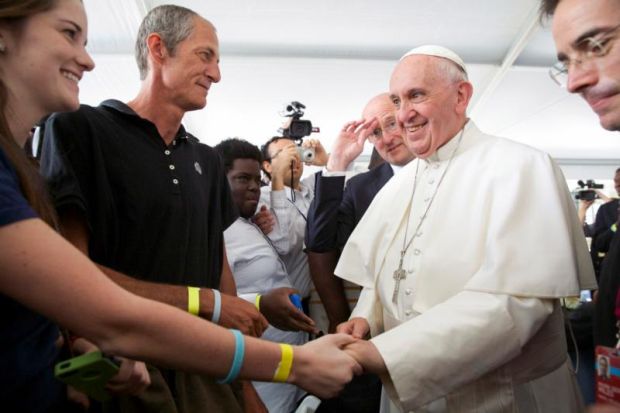 “I want to be very clear,” Pope Francis told the crowd, many of whom have low incomes, are immigrants, and receive medical care or clinical and mental health services from Catholic Charities in the Archdiocese of Washington.

After his remarks at St. Patrick’s, he exited from a side door of the church to visit the main headquarters of the archdiocesan Catholic Charities agency, blessing the chapel there.

Outside the Catholic Charities office Sept. 24, many homeless clients receive a meal from the St. Maria’s Meals Program. He stopped at the line and told them with a smile, “Buen apetito!” — “Enjoy your meal!” — to applause followed by a swarm of outstretched arms and hands. Pope Francis waded into the throng, waving and shaking hands, surrounded by nearly as many photographers and security agents as hungry people. He also posed for a number of selfies taken by ecstatic members of the crowd.

Washington Mayor Muriel Bowser, who was a teen lector at her District of Columbia parish, stayed behind to talk with the homeless diners after the papal motorcade left.

Pope Francis spoke in his native Spanish; his remarks were interpreted inside St. Patrick, and the Vatican translated texts as well.

He reminded the Catholic Charities clients of the Christmas story, when Jesus was born in a manger in a stable, because there was no room for Joseph and Mary at the inn in Bethlehem. 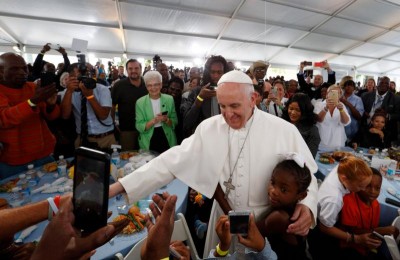 “These are questions which many of you may ask daily,” the pope continued. Like St. Joseph, you may ask: Why are we homeless, without a place to live?”

The pope told the Catholic Charities clients that Jesus is with them to give them comfort.

“We know that Jesus wanted to show solidarity with every person. He wanted everyone to experience his companionship, his help and his love. He identified with all those who suffer, who weep, who suffer any kind of injustice,” Pope Francis said. “He tells us this clearly: ‘I was hungry and you gave me food, I was thirsty and you gave me something to drink; I was a stranger and you welcomed me.'”

He encouraged the Catholic Charities clients to pray.

“In prayer, we all learn to say ‘Father,’ ‘Dad.’ And whenever we say ‘Father’ or ‘Dad,” we learn to see one another as brothers and sisters,” Pope Francis told them. “In prayer, there are no rich and poor people, there are sons and daughters, sisters and brothers. In prayer, there is no first or second class, there is brotherhood. It is in prayer that our hearts find the strength not to be cold and insensitive in the face of injustice.”

The pope then led a recitation of the Our Father, telling the group he would start in Spanish, but adding they could continue in English.

The pope entered the church with Cardinal Donald W. Wuerl of Washington and Msgr. Salvatore Criscuolo, pastor of St. Patrick.

The pope took a pot of flowers to a Marian altar at the side of the church and stood praying silently for a minute before addressing the crowd. He left the church with Msgr. John Enzler, director of Catholic Charities of the Archdiocese of Washington, and Cardinal Wuerl.

Pope Francis has made a visit with the poor and marginalized in society a hallmark of his pastoral visits to other nations, just as he has with visits to prisoners; a visit to a jail in Philadelphia is a part of the final day of activities of his Sept. 22-27 U.S. trip.

The visit to St. Patrick’s and Catholic Charities was his last publicly scheduled event in the District of Columbia before he headed to New York to continue his first visit to the United States.

PREVIOUS: Kids who will greet pope at Harlem Catholic school have questions ready

NEXT: Text of Pope Francis’ speech at Washington homeless shelter