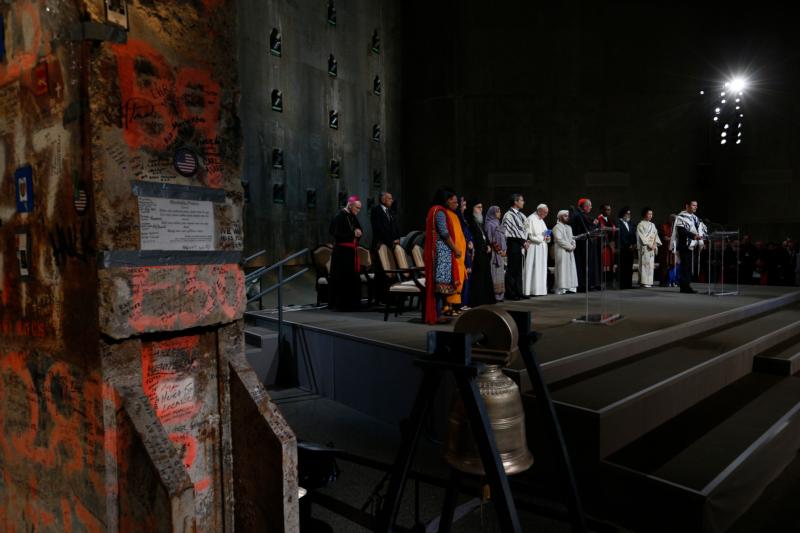 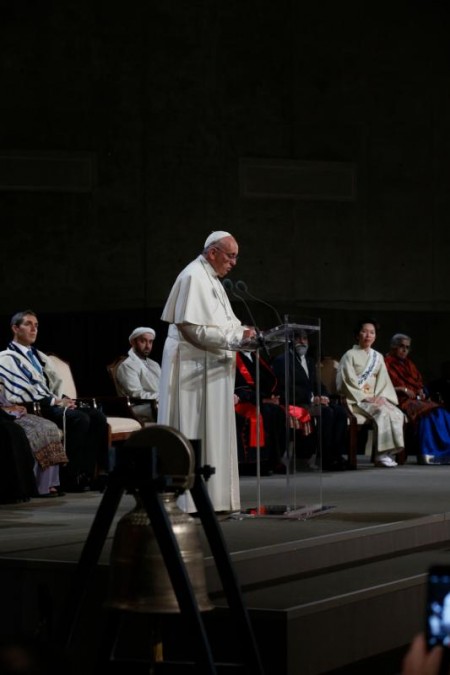 Pope Francis gives a reflection as he joins representatives of religious communities in Foundation Hall at the ground zero 9/11 Memorial and Museum in New York Sept. 25. (CNS photo/Paul Haring)

NEW YORK (CNS) — Honoring both the pain and the strength of the families of those who died at the World Trade Center on 9/11 and drawing on the pools of water that are part of the site’s memorial, Pope Francis spoke about tears and quenching the world’s longing for peace.

“The water we see flowing toward that empty pit remind us of all those lives” lost in 2001, he said. “The flowing water is also a symbol of our tears. Tears at so much devastation and ruin, past and present.”

The pope and New York Cardinal Timothy M. Dolan each left a single white rose on the edge of the fountain in Memorial Plaza. Pope Francis also met briefly with 20 family members of fallen first responders, shaking their hands, blessing them and listening to them carefully with the help of an interpreter. Gathered around the fountain were 1,000 people — including some injured when the Twin Towers fell.

Afterward, Pope Francis joined a varied group of religious leaders and about 400 people in Foundation Hall to offer prayers for the deceased and for peace in the world.

“Intolerance and ignorance fueled those who attacked this place,” Latif said. “We stand together as brothers and sisters to condemn their horrific acts of violence and honor each life that was lost.”

Rabbi Cosgrove prayed that “today and everyday may we understand our shared mission to be, in the words of Pope Francis, ‘a field hospital after battle’ to heal the wounds and warm the hearts of a humanity in so desperate need of comfort.”

Representatives of the Hindu, Buddhist, Sikh, Christian and Muslim communities read meditations on peace, and a choir sang a Jewish prayer in honor of the deceased.

Pope Francis read the same prayer Pope Benedict XVI recited when he visited the ruins of ground zero in 2008, a prayer that specifically mentions also those who died the same day at the Pentagon and near Shanksville, Pennsylvania.

“This is a place where we shed tears, we weep out of a sense of helplessness in the face of injustice, murder and the failure to settle conflicts through dialogue,” Pope Francis said in his personal reflection.

Meeting the families of victims, he said, was a concrete reminder that “acts of destruction are never impersonal, abstract or merely material. They always have a face, a concrete story, names.

“In those family members,” he said, “we see the face of pain, a pain which still touches us and cries out to heaven.”

However, the pope said, they also demonstrate “the power of love and remembrance,” which is something the memorial promotes with the names of those who died in the attack engraved in stone. “We can see them, we can touch them and we can never forget them.”

What happened on 9/11 and in its aftermath are not just motives for grief, though, he said. The reaction of the first responders and of thousands of New Yorkers demonstrated “the heroic goodness which people are capable of,” which also must be remembered.

“No one thought about race, nationality, neighborhoods, religion or politics” as they pitched in, some even risking their lives, to help others, the pope said. “This place of death became a place of life, too, a place of saved lives, a hymn to the triumph of life over the prophets of destruction and death, of goodness over evil, reconciliation and unity over hatred and division.”

Pope Francis asked those in the underground hall to join him in a moment of silence, “imploring from on high” the gift of peace “in all those places where war never seems to end,” but also “peace for those faces which have known nothing but pain.”

Contributing to this story were Carol Zimmerman and David Sedeno in New York.

NEXT: In a first, Vatican flag flies over U.N. along with other nations’ flags