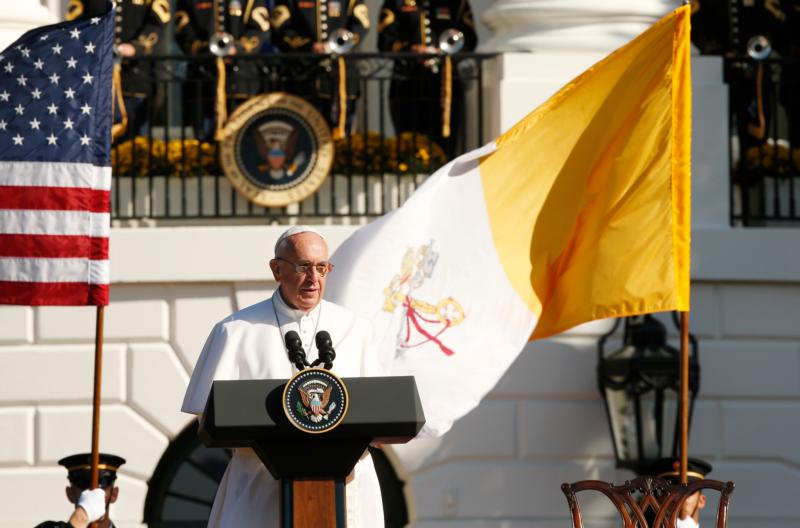 Pope Francis speaks during a ceremony with U.S. President Barack Obama on the South Lawn of the White House in Washington Sept. 23. (CNS photo/Paul Haring) 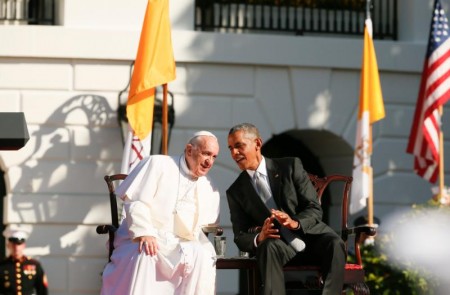 U.S. President Barack Obama leans in to talk to Pope Francis during a ceremony on the South Lawn of the White House in Washington Sept. 23. (CNS photo/Paul Haring)

WASHINGTON (CNS) — Pope Francis introduced himself to President Barack Obama and all people of the United States as a “son of an immigrant family” arriving in the United States for the first time to learn from others and to share from his own experience.

In a country the pope said he knows was “largely built” by immigrant families, he made his debut speech to Americans Sept. 23 on the South Lawn of the White House with some 20,000 people in attendance.

Obama told him, “Our backyard is not typically this crowded,” but the attendance on a bright, sunny morning was a reflection of the devotion of U.S. Catholics “and the way your message of love and hope has inspired so many people, across our nation and around the world.”

While obviously honored by the welcome, Pope Francis was clear in issuing several challenges, including by publicly voicing his support for the U.S. bishops’ defense of religious freedom. The bishops have objected to the Obama Administration’s efforts to force almost all employers, including many Catholic institutions, to fund contraception coverage in health insurance policies.

“Mr. President,” the pope told him, American Catholics want “a society which is truly tolerant and inclusive,” one that safeguards individual rights and rejects “every form of unjust discrimination,” but also respects the deeply held religious beliefs of citizens and the moral and ethical obligations that flow from them.

Obama, in his remarks, spoke about religious freedom as well, but referred only to the defense of Christians being persecuted and even killed for their beliefs around the world.

The pope arrived in the United States from Cuba, and both he and the president spoke about efforts to normalize relations between the two countries after more than five decades of tension and estrangement.

“The efforts which were recently made to mend broken relationships and to open new doors to cooperation within our human family represent positive steps along the path of reconciliation, justice and freedom,” Pope Francis told the president.

Although Pope Francis consistently has downplayed his role in encouraging and supporting Obama and Raul Castro’s talks, the president told him, “Holy Father, we are grateful for your invaluable support of our new beginning with the Cuban people, which holds out the promise of better relations between our countries, greater cooperation across our hemisphere and a better life for the Cuban people.”

The crowd on the lawn applauded almost every line of the speeches of both Pope Francis and Obama. The pope, who claims his English is very rudimentary, read the speech in a clear English and used his hands to emphasize some points.

Before moving inside for a private conversation, both leaders also spoke about the environment and, particularly, Pope Francis’ recent encyclical “Laudato Si’,” which urges nations and the international community to take concrete, serious action to slow climate change and help the poor, who are most impacted by environmental destruction.

“Climate change is a problem which can no longer be left to a future generation,” the pope told the president. Now is a “critical moment” when it is still possible to make positive changes, but they must be made quickly.

“Such change demands on our part a serious and responsible recognition not only of the kind of world we may be leaving to our children, but also to the millions of people living under a system which has overlooked them,” he said.

The earth itself has been excluded from people’s concern just as the poor have, the pope said. “To use a telling phrase of the Rev. Martin Luther King, we can say that we have defaulted on a promissory note, and now is the time to honor it.”

Obama thanked Pope Francis for his encyclical, but spent most of his speech praising the pope’s leadership style.

“Your Holiness, in your words and deeds, you set a profound moral example,” he said. “In these gentle but firm reminders of our obligations to God and to one another, you are shaking us out of complacency.

“All of us may, at times, experience discomfort when we contemplate the distance between how we lead our daily lives and what we know to be true and right,” the president said, but the call also gives people confidence that they need to “come together, in humility and service, and pursue a world that is more loving, more just, and more free.”

NEXT: Be shepherds concerned only for God and others, pope tells U.S. bishops