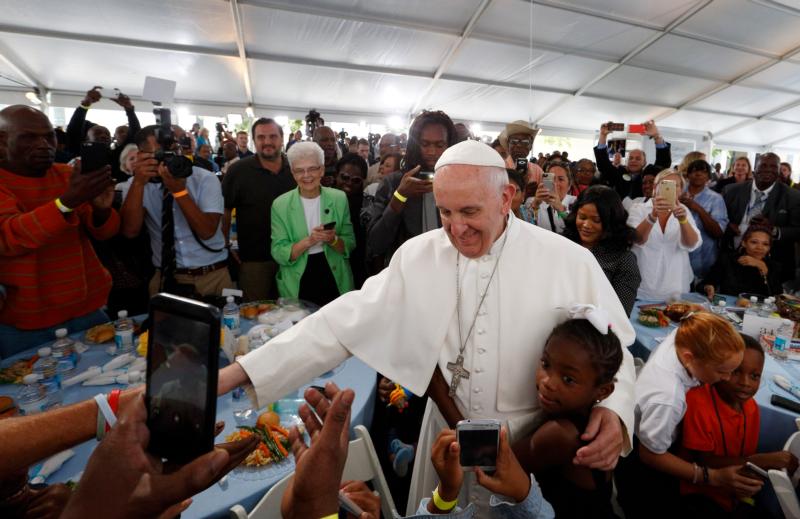 WASHINGTON (CNS) — Benedict Zama looked out from her table and Pope Francis was coming toward her moments after he arrived at the St. Maria’s Meal program of Catholic Charities of the Washington Archdiocese.

“Hello,” she said in her native French, extending her right hand. “Welcome. How are you?”

That’s when her son, Ezekiel, 7, walked up the pope, hugged him and shook his hand.

Zama, a native of the Central African Republic and client of the Catholic Charities’ Family Re-Housing and Family Stabilization program, said she was surprised and pleased to meet the pope. “I am glad,” she said.

The pope’s visit lasted about 15 minutes and he was unable to sit down for lunch in the makeshift dining center set up under a tent in front of Catholic Charities headquarters in downtown Washington.

Many of the 500 invitees swarmed the pope after he said a brief prayer over the food, wished the mixture of Catholic Charities clients, volunteers and staff “buen apetito” and stepped into the tent.

He walked slowly through the crowd accompanied by at least five security agents, smiling, shaking hands and exchanging brief greetings. He stopped at several points, including once to address one of the security agents.

Although short, the visit left a lifetime of memories, especially for those who got to meet him.

Alan Lockett, 53, a resident of the Adam’s Place shelter Catholic Charities operates, showed off the photo he took of the pope with his smartphone and posted on Facebook. The 23-year retired Navy veteran said he never thought he’d “get this close” to the pope.

“He put his palm in my palm,” Lockett said. “He held it for five seconds. It seemed like an hour.”

Juan Pablo Segura, 27, a volunteer with the meal program, said he invited Pope Francis to stay for lunch, but the pontiff declined, saying he had to leave.

“But he said to enjoy lunch. He asked me to pray for him,” Segura said.

Prior to the pope’s arrival, a festive atmosphere enshrouded the tent, where 55 tables had been set up for people. People mingled and walked from table to table sharing their excitement about the pope’s visit.

Robert Lee Grant Jr. sat at a table the pope passed. He said he shook the pontiff’s hand, never thinking he would ever meet any pope, let alone one who places the needs of poor and homeless people foremost. Given life’s challenges — Grant said he has been shot, stabbed, hit several times by a car and was injured at a construction site when a cement block fell 18 feet and hit his head — meeting the pope was especially memorable.

“I’m a religious man anyway and anything that is lifting up God, I have to be there,” he told CNS prior to the pope’s visit. “I’ve been saved by a lot myself. Just glad to be around.”

Grant and the others waited more than three hours for the pope to arrive. Most had gathered by 8 a.m. in the tent and got periodic updates on the pope’s schedule. The anticipation grew after hearing Pope Francis had left the Capitol, where he had addressed a joint meeting of Congress and toured Statuary Hall to see a sculpture of the church’s newest saint, Junipero Serra, a Spanish-born Franciscan who was a missionary in California.

At another table, Tyeshia Harrison, 28, was keeping two of her toddler sons busy. Year-old Nemo was squirming and grabbing everything in sight. Agape, 3, was coloring pictures of Pope Francis that Catholic Charities staff had distributed.

“It’s an honor to be here,” said Harrison, who is living with all four of her boys in Catholic Charities’ Angel’s Watch shelter for domestic violence survivors in Charles County, Maryland. “God put it in my heart to show my appreciation by being here.

“Catholic Charities has opened the door for me to provide a safe haven, a comfortable bed, school supplies, many positive resources in my critical time,” she said.

Ron Dorsey was equally thankful for the work of Catholic Charities and the chance to see Pope Francis. The resident of the 801 East Men’s Shelter in Washington’s Anacostia neighborhood said the pope is a man of the people.

“They call Pope Francis the ‘slum pope.’ He really reaches out to people who are down and I really like that about him,” Dorsey said.

He and several others were hopeful that the pontiff’s speech to Congress and his visit to St. Maria’s Meal program would push society to begin to concretely address homelessness, poverty and other social concerns.

Kenneth Pearson, 46, another 801 resident, said that having the pope around should remind people of the needs of the less fortunate.

“I am glad to see him in Washington, to visit to talk with the homeless and to see what he could do to help the homeless. It would be a blessing if he could help us out with housing,” Pearson told CNS.

“Nobody should be in this predicament like this. … I wish I had my own place. Trying to survive, figuring out where your next meal will be, where you’re going to shower. It’s not right.

“So we ask for his (Pope Francis) blessing to get these people off the street, to find affordable housing. I count on him helping my brothers. We appreciate what he can do for us.”

PREVIOUS: In the days of Francis, praise the light overcoming darkness