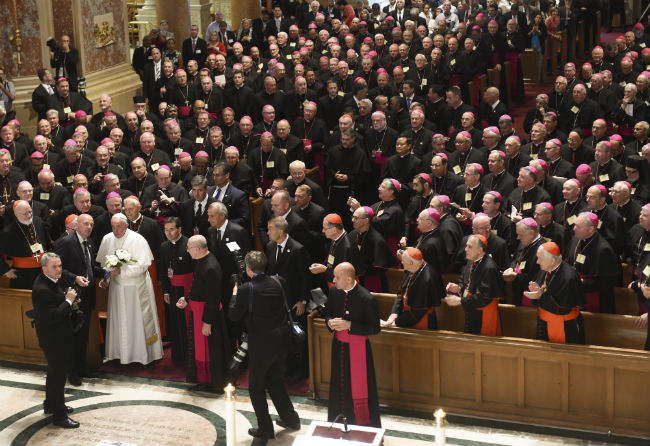 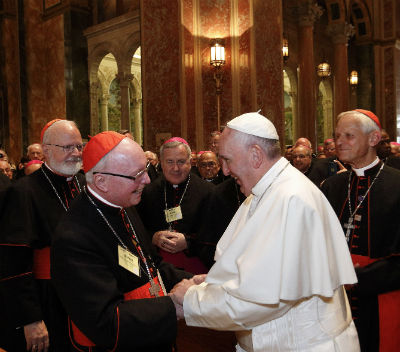 Pope Francis greets Cardinal James Stafford during a prayer and meeting with U.S. bishops in the Cathedral of St. Matthew the Apostle in Washington Sept. 23. (CNS photo/Paul Haring)

WASHINGTON (CNS) — Pope Francis had much to say to the U.S. bishops during his remarks at a midday prayer service at St. Matthew Cathedral in Washington Sept. 23, the first full day of his U.S. apostolic journey.

Because of that, different bishops could take away different things.

What resonated most for Bishop Daniel E. Flores of Brownsville, Texas, was the pope’s remarks about immigration.

“I liked how Pope Francis saw the immigrant as a gift, and how we are called to love one another,” Bishop Flores added. “In the Rio Grande Valley, that means a lot. It was beautiful, beautiful.”

Archbishop William E. Lori of Baltimore took heart in what Pope Francis said to bishops about “the encouragement he gave to the episcopacy. He cares to see us express discipleship in our roles as pastors. That, and the care of the poor and the immigrants. It was a beautiful address.”

Pope Francis “wants us to be pastors, shepherds for other people,” Bishop Weigand said. “I worked 10 years in Latin America with the poor. In my experience, that’s exactly what a priest needs to do. And bishops more so.”

Bishop Weigand also liked how Pope Francis told the U.S. bishops to “not fear what we love to do, and to stay close to his people. Ask God to give his light and his strength. He has a very simple way of focusing on what to do: Feed the people, give them Jesus. He takes a complex example and boils it down.”

For others in attendance at the cathedral, the takeaway may have come just in being there.

Margarida Alves, a Brazilian immigrant who came to the United States 31 years ago, got her ticket, she said, because as a member of the cathedral parish she has been volunteering at St. Matthew since she retired two years ago.

“I help them to clean and polish and wash for the service. Everything they need me to do.” Now that she is retired, “I have time for my church now,” Alves added.

Sabrina Gallego, another cathedral parishioner, was there with her mother. “Just being here, I feel blessed,” she said. “My mother was worried we wouldn’t make it in time. So she woke up at six-thirty in the morning. I woke up at seven” for a service that started at 11:30 a.m. (EDT)

Gallego added, “We’re just lucky the Metro didn’t have any problems.” Even before the sun was up, Metro, Washington’s subway system, was reporting delays on five of its six lines, including the Red Line closest to the cathedral. They got lucky in another way: “We won the holy lottery” for tickets, Gallego said.

One attendee who didn’t have to worry about the commute was Father Rafael Barbieri. Although he hails from Brazil, he is parochial vicar at St, Matthew.

“We are all really excited about him coming here to the cathedral,” Father Barbieri said. “This pope has said and done many, many good things. He’s a definite inspiration to all of us priests.”

His position at the cathedral, though, was no guarantee that Father Barbieri would get to shake Pope Francis’ hand. “Only when he goes down the aisle will I have a chance to say hi,” he said.

Father Barbieri’s boss — Msgr. W. Ronald Jameson, the cathedral rector — was busy greeting parishioners who were filtering into St. Matthew well before the 300 or so bishops arrived.

Asked if he were fairly bursting with excitement, Msgr. Jameson pointed to his combination belt and sash tied around his cassock. “I have to be careful about that,” he said. “If I get too excited I might pop my Velcro.”

NEXT: Shouts, waves greet papal motorcade during a brief trip around Ellipse