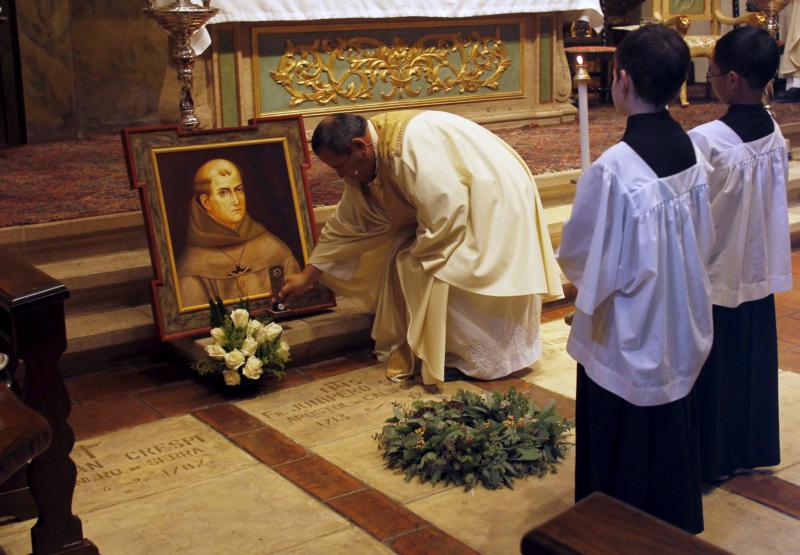 Father Miguel Rodriguez sets a relic on the tomb of Junipero Serra during Mass at the Carmel Mission Basilica in Carmel, Calif., Sept. 23, the day the Spanish missionary and founder of the California mission system was declared a saint by Pope Francis in Washington. (CNS photo/Michael Fiala, Reuters)

CARMEL, Calif. (CNS) — Days after St. Junipero Serra was canonized by Pope Francis in Washington, a statue of the 18th-century Franciscan missionary and other property at the Carmel Mission where the saint is buried, were defaced.

The vandalism occurred Sept. 26, three days after the canonization ceremony. Vandals damaged statues, gravesites and signs and poured green and white paint on doors, Carmel Police Sgt. Luke Powell told the Salinas Californian daily newspaper. “Saint of Genocide” was written on a headstone, green paint was splashed on a toppled Serra statue and headstones were splattered with dark red paint.

A police report noted that the paint splattered on gravesites was on graves of Europeans, not Native Americans.

The vandalism occurred the night before a Mass was celebrated at the Carmel Mission honoring the saint. Volunteers cleaned up most of the destruction before the Mass began.

Some people had objected to the canonization of the Spanish missionary, who founded nine California missions, because of questions about how he treated the native peoples of California and about the impact of Spanish colonization on native peoples throughout the Americas.

The Facebook page for the Carmel Mission put out a call for volunteers to help clean up after discovering the destruction Sept. 27 stressing that “the way to healing is peace and service.”

A post announcing the vandalism urged prayers that “the people who did this take responsibility for their actions on this sacred property and that they seek reconciliation,” and a post later that day thanked the volunteers for their help.

“You are all a blessing to this community and church. Let us remember that we live in a loving community and let us not be discouraged by such things. As St. Serra said, ‘Always look forward, never back.'”

“We are almost all cleaned up,” it added, thanking everyone for the “outpouring of support and prayers.”

NEXT: Virginia infant, clad in a tilma, gets kiss, blessing from Pope Francis