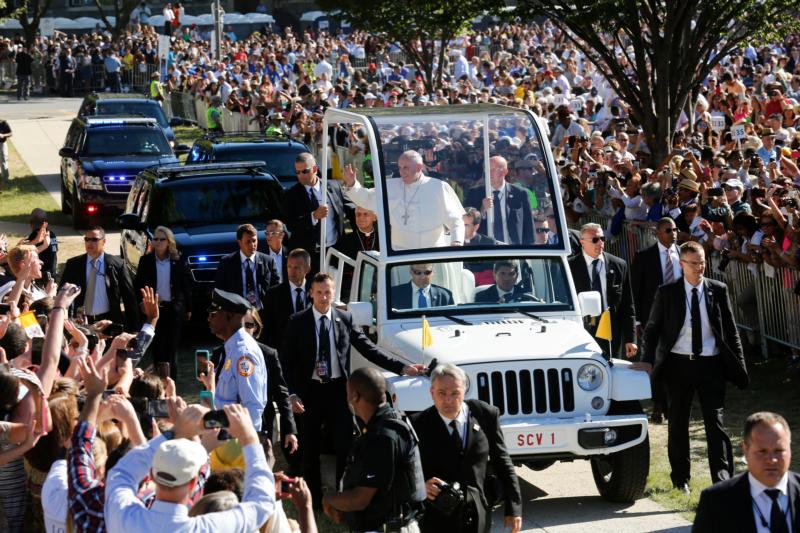 Pope Francis arrives for Mass and the canonization of Junipero Serra at the Basilica of the National Shrine of the Immaculate Conception in Washington Sept. 23. (CNS photo/Bob Roller)

WASHINGTON (CNS) — Pope Francis gave the crowd gathered at the Basilica of the National Shrine of the Immaculate Conception double the thrill before the canonization Mass for Blessed Junipero Serra Sept. 24.

His popemobile passed twice through a barricaded walkway before he entered the national shrine to address seminarians and novices.

People cheered, waved and prayed as the short motorcade traveled slowly through the grounds of The Catholic University of America adjacent to the national shrine where 25,000 people had gathered.

Pope Francis beamed as he waved to the crowd of young and old. He even acknowledged the media with a wave and a smile as the popemobile passed a tier of risers while photographers and videographers jostled for position.

Throughout the crowd — which slowly built throughout the afternoon after some people spent up to two and a half hours to get through security checkpoints — people wore shirts, hats and badges commemorating Pope Francis’ U.S. visit and the canonization Mass.

Patrice Morace, director of faith formation at Annunciation Church in Washington, did not mind the security wait. She said she was willing to endure the delay and that she was excited to share a couple of hours with Pope Francis at Mass.

Since pope announced steps to simplify the marriage annulment process Sept. 8, she said she has received at least five inquiries. That contrasts with the three or four requests her office would receive annually. The same holds true for people inquiring about the parish’s Rite of Christian Initiation for Adults program and the 14 new families who enrolled in religious education classes.

“It’s wonderful what he’s doing for the church in making it more accessible for people to come back. Because of his message people are inquiring about the Catholic faith,” Morace said.

Inside the security boundary, many in the sun-drenched crowd took shelter from bright sunshine and 80-degree temperatures in any shaded area they could find and napped, talked, took selfies and kept children busy. People from across the United States and across the Archdiocese of Washington made friends in true Pope Francis tradition.

John Reyna, of Lee’s Summit, Missouri, shared a corner of shade cast by a maple tree with Teresita Betonio and Joselyn Lacap, both members of Christ the King Parish in Washington. They shared stories about how they ended up at the Mass.

Reyna said he was invited by a friend, Paul Camarata, a member of the Order of Malta from Overland Park, Kansas, and gladly accepted. The women received tickets through their parish.

“Paul reminded me that coming to a canonization may happen only once in a lifetime and for a canonization in the United States, it is very unusual,” Reyna told CNS.

But there was a deeper reason for Reyna, who is of Lakota descent, to attend the ceremonies. He said being at the Mass was about charity and forgiveness.

“A lot of my relatives object to Junipero Serra being canonized. In my upbringing I understand the need for healing and forgiveness and so for my ancestors and relatives, I’m here to pray for them and also so that they know God’s mercy,” said Reyna, a member of Old St. Patrick Oratory in Kansas City, Missouri.

“Many (members of native tribes) believe there were harms and atrocities. But I think most us who are here are testament that there were people of charity and love who helped us survive and continue to survive by carrying out that love.”

Claudio Romero, a member of St. John the Baptist Church in Folsom, California, said she was excited about “meeting” Pope Francis.

“Forever I wanted to meet Pope John Paul II, but now I get to meet Pope Francis,” she said after getting a ticket to the Mass through a friend who could not attend because of a work commitment. “Just even listening to his voice here, being present is a blessing. It’s the same thing as meeting him to me.”

Nearby by four friends from Washington’s St. Gabriel Parish gathered in a shaded area. Until Sept. 21, they were happy to see the pope on television during the “pope party” they had planned. A call from their pastor, Father Avelino Gonzalez, changed their plans.

“We got here by the grace of God,” said Gwen Sutton, who with Laverne Atiba, Barbara Shaw and Phyllis Watson, got through security early and were waiting for the pope to arrive. During his pass through the crowd, Pope Francis passed close to their selected seats on the ground.

Across the grounds, seven first-year Catholic University of America students stopped to take selfies with the basilica as the backdrop. Several in the group said they were excited to see the pope and were impressed by his openness to people of all walks of life.

“I think he’s just really in tune with the youth,” said Mary Alicona, 18, of Hartford, Connecticut, one of the seven. “I think he’s more in tune also with this day and age.”

Emma Flynn, 18, of Yonkers, New York, said Pope Francis “seems to be a very kind person because he understands the importance of pursuing social justice in the world.”

A third student, Erin Marchini, 18, of Westchester, New York, welcomed the pope’s efforts to help excluded people feel included. “He focuses on the acceptance of all people and what brings us together instead of focusing on our differences,” she told CNS.

On a nearby incline far from the altar set up on the east front of the national shrine, Ron Crawford, a member of St. Cassian Parish in Montclair New Jersey, called the event “wonderful” although he was separated from his wife, Karen, a Catholic University of America alumna whose ticket provided a seat closer to the altar.

“This pope has solidified a sense of joy in the people. This pope has such an incredible sense of wanting to help people. You see it in young people,” Crawford said.

The Crawfords also planned to see Pope Francis Sept. 24 from the west front of the U.S. Capitol after he addresses a joint meeting of Congress. Crawford suggested that the pontiff may inspire them to overcome their partisanship.

“The pope will address issues that I hope these politicians will listen to,” he told CNS. “He understands that we must change or we will destroy ourselves.”

Nearby, Father Andrew Turner of the Cleveland Diocese was talking with friends on his way to vesting with other priests to concelebrate the Mass. He and Father Damian Ference organized all 74 seminarians at Cleveland’s two seminaries to make the trip for the Mass and to hear the pope’s brief address inside the basilica before the Mass.

“For many of the guys, they’re 18, 19, 20 years old, it’s the first time to see the pope. He’s a hero for them. It’s bigger than life. To be in the presence of someone who they’ve read about and studied is special for them,” Father Turner said.