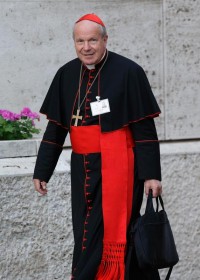 File photo of Austrian Cardinal Christoph Schonborn of Vienna arriving for the morning session of the extraordinary Synod of Bishops on the family at the Vatican Oct. 16, 2014.

VATICAN CITY (CNS) — A three-week Synod of Bishops to talk in the abstract about Catholic teaching on the family makes no sense to Austrian Cardinal Christoph Schonborn of Vienna.

“We are all called to observe the situation, not gazing from above and beginning with abstract ideas, but with the gaze of pastors who scrutinize today’s reality in an evangelical spirit,” the cardinal said in an interview with Jesuit Father Antonio Spadaro, editor of La Civilta Cattolica.

The approach the bishops are called to take, he said, “is not first of all a critical gaze that highlights every failure, but a benevolent gaze that sees how much good will and how much effort there is even in the midst of much suffering.”

The next step, he said, is not to pretend that everything in all those situations is fine, but to help Catholics build on what is good, growing in holiness and faithfulness to God and to each other.

The church’s ministers, the cardinal said, should recognize what is good where it is found. For example, he said, a civil marriage is better than simply living together, because it signifies a couple has made a formal, public commitment to one another. “Instead of talking about everything that is missing, we can draw close to this reality, noting what is positive in this love that is establishing itself.”

Cardinal Schonborn spoke in the interview about a gay friend of his who, after many temporary relationships, is now in a stable relationship. “It’s an improvement,” he said. They share “a life, they share their joys and sufferings, they help one another. It must be recognized that this person took an important step for his own good and the good of others, even though it certainly is not a situation the church can consider ‘regular.'”

The church’s negative “judgment about homosexual acts is necessary,” he said, “but the church should not look in the bedroom first, but in the dining room! It must accompany people.”

Pastoral accompaniment “cannot transform an irregular situation into a regular one,” he said, “but there do exist paths for healing, for learning,” for moving gradually closer to a situation in compliance with church teaching.

“We are not at risk of diluting the clarity (of church teaching) while walking with people because we are called to walk in the faith,” he said. No synod member wants to change church teaching.

However, he said, at the 2014 extraordinary synod it seemed that many synod members had very abstract ideas — and actually rather modern ideas — of what the reality of marriage is, ignoring that “for centuries, perhaps millennia,” marriage was a sacrament reserved to the upper classes who could afford a dowry and a ceremony.

“In the Vienna baptismal records of the 1800s, about half of the babies were illegitimate, children of all those servants in the upper-class homes who could not marry because they did not have the means,” he said.

More and more young people today are living together instead of marrying, many of them because of a lack of financial security, he said. The bishops need to ask themselves, “Are we here to deplore this phenomenon instead of asking ourselves what has changed?”

“There is a risk of easily pointing a finger at hedonism and individualism,” he said, when “it takes much more effort to observe the realities carefully” and respond helpfully.

Cardinal Schonborn said that being a child of divorced parents — and of a father who remarried — he knows what it is to grow up in a “patchwork family.” And despite it not conforming fully to the church’s ideal, “I also experienced the radical goodness of the family,” with grandparents, aunts, uncles and cousins who helped out.

Unfortunately, he said, the media seem to have made the treatment of Catholics who are divorced and civilly remarried without an annulment into a “test case” for Pope Francis, asking “In the end, will there be mercy for those in irregular unions?” meaning allowing them to receive the sacraments.

But a blanket edict, he said, is not the attitude of Christ, the good shepherd; “the attitude of the Good Shepherd is, first of all, to accompany persons,” helping them heal.

They want mercy from the church, the cardinal said, “but the first mercy to be requested is not that of the church, it is mercy toward their children” and toward the ex-husband or ex-wife. The church’s ministers can help them move in that direction, too, he said.