Key organizer of families’ meeting is cleared in Italian probe 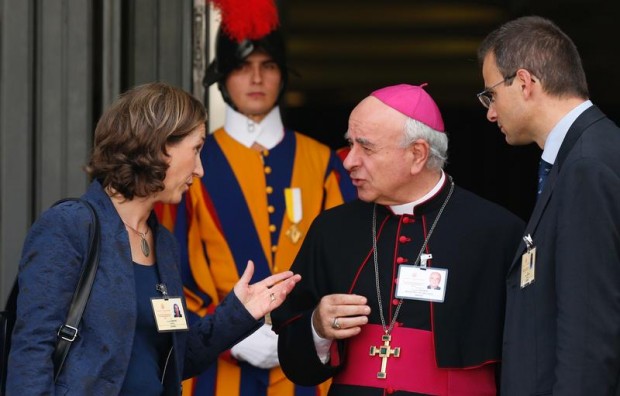 Archbishop Vincenzo Paglia, president of the Pontifical Council for the Family, talks with Xristilla and Olivier Roussy, auditors from France, as they leave the morning session of the extraordinary Synod of Bishops on the family at the Vatican Oct. 7. (CNS photo/Paul Haring)

VATICAN CITY (CNS) — Archbishop Vincenzo Paglia, head of the Pontifical Council for the Family and lead Vatican organizer of the World Meeting of Families in Philadelphia, has been dropped from a criminal investigation.

An Italian investigating judge ruled Sept. 21 that the archbishop was “completely un-involved” in a scheme to purchase, then resell at a profit a 14th-century Italian castle.

The judge made the decision after the public prosecutor’s office filed a motion to dismiss the archbishop from the investigation.

In a written statement released Sept. 22, Archbishop Paglia said, “It is deeply satisfying that the court has found me to have had nothing at all to do with the activities described in the investigative report or with any other possibly related wrongdoing.”

The archbishop led the Diocese of Terni-Narni-Amelia from 2000 until 2012, when he was appointed president of the Pontifical Council for the Family.

In December 2010, the town of Narni sold the castle property, which once had been a Franciscan monastery, to a group of buyers headed by a diocesan institute for 1.76 million euros with the proposal of turning it into a four-star tourist accommodation.

The local public prosecutor and local police opened an investigation into the property deal in 2013.

At the end of the investigation, warrants were issued in May 2015 to Archbishop Paglia and two other diocesan officials. A diocesan financial officer at the time was also the head of an Italian firm that purchased the property, which today remains undeveloped. The men were among the 10 people, including the former mayor of Narni, being investigated for allegations that included conspiracy to commit fraud, money laundering, bid tampering and embezzlement.

Archbishop Paglia’s lawyer, Manlio Morcella, told the regional news outlet, Umbra24, that he and his client were satisfied with being allowed to provide documentation that “demonstrated quite easily the complete non-involvement of the archbishop.”

The lawyer explained that the decision for the diocese to be involved in the purchase had come from the archbishop’s predecessor, Bishop Franco Gualdrini, who died in March 2010 — nine months before the initial sale went through. Archbishop Paglia had only indicated that the diocese was among the bidders, but then had no further knowledge of what happened during the bidding process, Morcella said.

The World Meeting of Families is hosting tens of thousands of people from 150 countries for four days of conferences and activities focusing on the family from Sept. 22 to 25. Pope Francis will visit Philadelphia Sept. 26-27 to cap the families’ congress and his first trip to the United States.