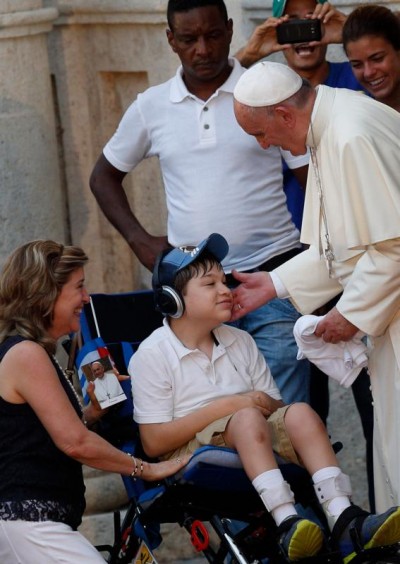 HAVANA (CNS) — In a hot and steamy cathedral after listening to a Daughter of Charity talk about her work with people with severe disabilities, Pope Francis set aside his prepared homily and spoke about serving those the world considers “useless.”

Pope Francis thanked women religious around the world who dedicate themselves with love to caring for people the world ignores or would like to forget.

“Thank you for what you do and through you, thank you to all of these women, so many consecrated women, for their service to the ‘useless,'” he said. The religious “are not building an empire, you can’t make any money off of it, you can’t carry forward anything absolutely ‘constructive’ in quotes with those brothers and sisters of ours — the smallest, the least of these. That’s where Jesus shines.”

Those “who try to kiss you and cover your face with drool,” he said, “speak of Jesus.”

The pope said he knew the priests present, who work in normal parishes, were probably wondering what they should be doing to serve Jesus in the smallest, the weakest and the least of society.

Start with the 25th chapter of Matthew’s Gospel, he said, feeding the hungry, clothing the naked and welcoming the stranger. And, he begged them, spend time offering the sacrament of reconciliation, patiently and tenderly welcoming all.

Jesus did not berate sinners, the pope said, “he embraced them.”

The confessional, he said, is where every man and woman reveals his or her misery.

“If you are without sin, throw the first stone, but only on that condition,” the pope told the priests. “And think, you could be in that position and remember that in that moment, you hold a treasure in your hands,” the ministerial power to forgive sins in God’s name.

Cardinal Jaime Ortega Alamino of Havana introduced the congregation to the pope, telling him, “the church in Cuba is a poor church,” and the way that Cuban priests and religious and foreign missionaries embrace that poverty “is admirable.”

Pope Francis said the cardinal “used an uncomfortable word: poverty. The spirit of the world does not know that word, doesn’t seek it, hides it.”

Poverty, he said, can be a person’s greatest wealth, but the search for wealth can destroy a person’s life.

Quoting the Jesuit founder, St. Ignatius of Loyola, the pope said he wasn’t giving his order publicity, but found wisdom in St. Ignatius’ teaching that poverty “is the wall and the mother” of consecrated life. It stimulates trust in God and blocks out worldliness.

“Love poverty the way you love your mother,” he told them.

A wise old priest once told him, the pope said, that when a religious community becomes too attached to money, God usually sends a disastrous treasurer — “it’s a blessing.”

Daughter of Charity Sister Yaileny Ponce Torres, who works at a large government-run home for people with severe handicaps, spoke before the pope about her ministry. When she was about to begin her work, she said, another sister told her she would not be able to help “staring at Jesus” present in her patients.

“The place I live is beautiful,” she told the pope. “It is beautiful because there, God lives and shows himself in his weakest children.”

Pope Francis said Sister Ponce’s testimony was an illustration of responding to Jesus’ teaching that whatever one does for the least of his brothers and sisters is done for him.

Leaving the cathedral, the pope went outside to meet young people — Catholics, followers of other faiths and nonbelievers — at the Father Felix Varela cultural center.

Dreaming, hope and friendship were the key topics of his talk, which like his talk inside the cathedral, was ad-libbed.

Picking up on one of the themes he was discussing with the religious, Pope Francis told the young people “the empire of the god money” promotes the idea that one can and should discard anything or anyone that is not useful or productive, including young people and the elderly.

Societies and nations that do not invest in their young people, he said, are stripping themselves of hope.

Hope, he said, is not just easy optimism. It takes effort and a willingness to sacrifice and even suffer for a goal.

“It’s not easy. You cannot take it alone,” he said. “There is an African proverb that says ‘If you want to go fast, go alone. If you want to walk far, go with someone. I want you to walk with each other.’

“Even though you may think differently, that you have different points of view, I want you to walk together,” he said. “It is the sweet hope of homeland for which we must come together.”

“I urge you to try to talk about what we have in common and then we can talk about our differences. This is only possible when we have the ability to dialogue.”

Before leaving, Pope Francis asked the young people if they wanted him to pray with them.

Contributing to this story were Rhina Guidos in Holguin and Ezra Fieser in Santiago de Cuba.