For Belgau, it’s time to talk about being gay and a faithful Catholic 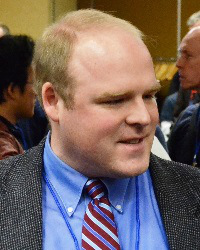 Cardinal Luis Tagle’s crowd-rousing keynote address at the World Meeting of Families on Thursday afternoon, Sept. 24, in Philadelphia — titled “The Family: a Home for the Wounded Heart” — packed a cavernous hall at the Pennsylvania Convention Center with about 10,000 eager listeners.

One of the 15 breakouts sessions that followed was similarly packed with congress delegates for a talk by Ron Belgau, a Ph.D. candidate and professor of ethics at the Catholic and Jesuit-run St. Louis University in Missouri. Belgau is a self-professed celibate gay Catholic man who embraces Catholic teachings and blogs about his experiences. He and his mother Beverly presented their session on how Catholic families can respond to the challenges faced by homosexual persons in today’s world with grace, compassion and truth.

CatholicPhilly.com discussed the talk with Ron Belgau the following day in which he elaborated on his life and Catholic teaching on marriage, sexuality and family.

Q. What was the arc of your spiritual development in relation to your understanding of being gay in the church?

A. It was gradual, actually, but always had to do with my understanding of marriage, and the eventual understanding of it as being something ordered toward the production of children. I’m a convert — I was raised a Southern Baptist — and was received into the Catholic Church when I was 24.

But what ended up attracting me to the Catholic Church was that a conjugal understanding of the nature of marriage — a “traditional” view of being geared toward the bond between a man and a woman and intended for children — wasn’t compatible in most, more permissive, Protestant understandings that somewhat arbitrarily allowed for divorce and remarriage, birth control and gay marriage.

And as I studied the early church fathers — at one point I had a Presbyterian pastor who was very much into Augustine’s impact in Reform theologies — I came to the understanding that the Catholic Church was really the one that looked like the church of the early Christians, and not those of the more “progressive” churches I had been a part of.

Q. So, a sort of Cardinal Newman-like historical conversion — one that was based on the historical foundations of the church and the succession of truth?

A. Yes, actually. And Newman is a good person to point out, in fact, because much of my blogging has quite a lot to do with what he talks about with friendship and his early conversion to a celibate lifestyle. The “Apologia (Pro Sua Vita)” actually resonates a lot with me, though I never read it at the time of my conversion, though I wish I had. It would have been a great “I’m-not-alone” moment.

Q. Your blog Spiritual Friendship delves into, among other things, issues confronting members of the LGBT community striving to live out lives in conformity with church teaching.

A. It’s meant to be that. What we wanted to do was create a public conversation where people could come and ask questions — not just members of the LGBT community, or even the Catholic community, though about half of us are Catholics, but where those trying to support those communities and where they overlap could come and share their experiences and struggles with one another.

One of the other instrumental groups in my formation early on was Bridges Across the Divide (a defunct website), mainly because it formed in me this idea of dialogue across the two camps — those in favor of gay relationships and those more in line with a conjugal view of marriage — and that forming dialogue does not necessarily mean arriving at consensus or forcing some kind of negotiation of compromise.

Spiritual Friendship is meant to continue that dialogue and promote those kinds of understandings of different perspectives. I’m also very set on keeping it within the existing structures of the church as well.

A. Well, a number of people have approached us asking if we were ever interested in forming our own ministry of sorts, but I think the point of something of this nature is to use the existing ministries of the church and to help those already active and at work in them to approach LGBT issues and audiences in a pastoral way, not break off and make our work exclusive to us.

A. If you examine the documents issued by the bishops throughout the years since 1970, particularly the one on pastoral care of homosexual persons put out by the USCCB in 2006, there’s the emphasis of the word friendship, and it increases as the years go on as something absolutely necessary to a gay person’s pastoral care. And what a lot of our writers focus on — and we’re not coming to it from an academic perspective, though a lot of us have that background — is what it means to live out friendship in a chaste, gay context in line with church teaching.

There’s actually a classical emphasis on this; there are all these historically deep, abiding friendships throughout history, and it’s present throughout the Bible: the covenant of Abraham, who is called “the friend of God,” and Moses, to whom God spoke to “as a man speaks to his friend.” Even Jesus tells his disciples, “I call you now my friends.” There are biblical examples and those from the church: David and Jonathan; Newman, of course; SS. Basil and Gregory.

Q. How does this play into your view of marriage?

A. As Catholics, we believe that our view of marriage isn’t arbitrary; it’s something literally written in us and our experience of reality. Our culture nowadays is so obsessed with the romantic idea of love and places so much emphasis on sexual desire that it often overlooks that friendship can be just as deep and just as fulfilling, but is, by its nature, completely different than (though in some ways similar to) the love between man and wife.

I think the same-sex attraction and love that’s felt often and engendered in the context of those deep friendships is something good, but can be “corrupted.” That’s a tricky word –corrupted — it’s something that, on a philosophical level, means for me that the good of something, and the love you feel for that person is indeed good, is misdirected. It just needs to be purified. We need to recover a sense that friendship can be deep and intimate and, by its nature, does not need, and can be lessened in some contexts, by the sexual.

Q. Since you brought up language, and we’ve talked about pastoral care, can you comment on what many people have perceived as the church’s less-than-pastoral language in the Catechism of the Catholic Church?

A. You mean things like “intrinsically disordered”? There’s a place for that. Present-day culture doesn’t understand the philosophical framework of the catechism, and often interprets it, falsely, with a psychological lens, which makes it sound less-than-merciful. But consider (catechism passage) 1750-1756, on the morality of human acts; some things just can’t be justified because of their ends. That means that fornication is inherently disordered. Divorce is “inherently disordered.” Lying is, too.

But it’s in some ways our fault as Catholics; we don’t really talk about those other kinds of sins as inherently disordered, even though they are. And “Vaticanese” can be direct and accurate, but unwieldly. Even the church’s positive teachings on heterosexual marriage and sex — which are wonderful — don’t really have the best emotional impact.

Q. Aside from the debate on marriage equality, how do these views fit into the rest of the lineup at the World Meeting of Families?

A. A great deal of it has to do with how LGBT persons fit into families. A lot of times I get told at these kinds of talks, “Oh, but you’ll never have a family.” Actually, I already have one. Oftentimes we get so caught up in talking about the family as the nuclear family that we forget about the rest, and the relationship and importance of our other roles: brother, son, uncle. Historically single aunts and uncles played a key role in raising children.

The Bible actually uses the term brother to describe the members of the Body of Christ in relation to one another; we are all “brothers in Christ.” And culturally and linguistically, in context it’s often not even immediately just as a sibling — it’s more accurately translated as a “relative.”

We are called to be first relatives to one another in the Body of Christ, and a lot of that meaning diminishes when we focus too exclusively on creating our own nuclear families, and plays down that brotherliness/sisterliness almost as soon as someone has a child. But that’s not what we’re called to be.

Q. How can the church address these things, then?

Q. Your talk on Thursday (at the World Meeting), “Always Consider the Person: Homosexuality in the Family,” was pretty packed. How did people seem to receive it?

A. People seemed tremendously grateful, actually. The outpouring of support that my mother and I received on the day of the breakout talk and in the lead-up was tremendously positive. We’ve had a number of people come up to us throughout the day and even before just to stop us and tell us how thankful they were that we were speaking.

Q. Why do you suppose that is?

A. What I want to emphasize is that, as wonderful as it is to be speaking about this, it’s not about me talking. What is important is that we get the church talking and people talking about these things.

I think what was extraordinary and indeed what is encouraging is that the church is recognizing and finally talking about something that it normally hasn’t; that the Archdiocese of Philadelphia and the Pontifical Council for the Family are recognizing that addressing the needs and struggles of homosexual persons is an important part of Catholic life, and that there were really so many families present at just our talk shows how concerned and responsive people are to that kind of attention.

NEXT: Catholic schools locked down near Phila. college while cops hunt gunman