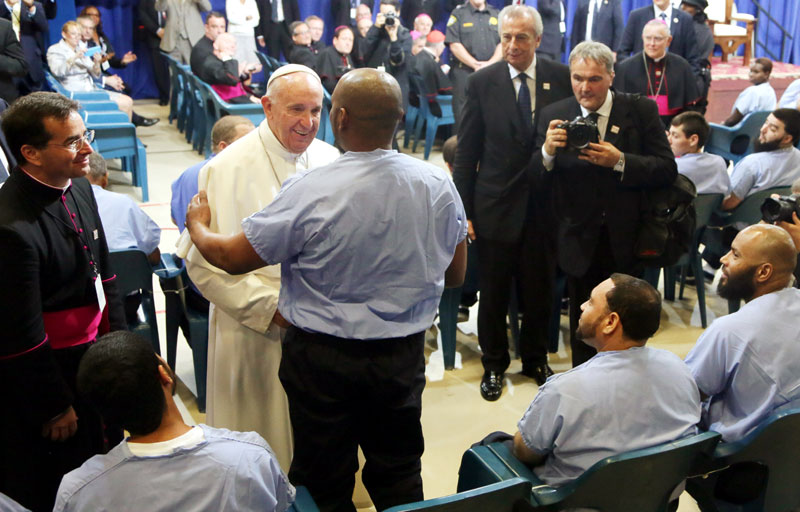 Pope Francis meets with one of 100 prisoners Sept. 27 at Curran-Fromhold Correctional Facility in Philadelphia. (Photo by Kevin Cook) 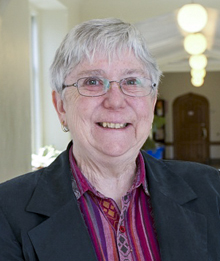 Pope Francis’ call to be a “poor church for the poor,” as he said at the very beginning of his pontificate in 2013, became realized when he visited Curran-Fromhold Correctional Facility Sept. 27 in Philadelphia, among his many other stops on his first apostolic visit to the United States.

The pope met with men and women inmates of the Philadelphia prison and some of their family members for about an hour that Sunday morning, the last of his two-day visit in the city.

Sister of Mercy Elizabeth Linehan, a professor of philosophy at St. Joseph’s University, has taught a course titled “Inside-Out” at Curran-Fromhold and other prisions in the Philadelphia region for several years. It brings together student-inmates from jails and university students from the outside world to form one class, taught together weekly inside the prison walls.

The course, according to Sister Elizabeth, is designed to break down stigmas and barriers by encouraging dialogue and discussion, particularly regarding freedom, fairness and justice.

She believes the outreach by Pope Francis to prison inmates, a practice he began as archbishop of Buenos Aires and has continued as pope, will have an important impact on the criminal justice system in America.

“He’s aware of the United States’ reputation as ‘the great incarcerator,’ with our country having a higher percentage of our population in prison than any other country’s proportion,” Sister Elizabeth said.

“Pope Francis has been in prisons before in Rome and Latin America, and very much identifies with people on the margins.”
Sister Elizabeth hopes Pope Francis’ visit may bring to light such injustices as men not convicted of a crime yet serving prison time while they await trial, and some others imprisoned without having bail set.

Anticipating the pope’s conversations with the inmates and their families, Sister Elizabeth believes “he’ll be aware of the injustices that may occur in the prison system,” and his presence will raise public awareness about prison systems around our country.

Pope Francis, while presenting himself at Curran-Fromhold “as a pastor but above all a brother” to the inmates, acknowledged such injustices during his Sept. 27 visit when he said, “It is painful when we see prison systems which are not concerned to care for wounds, to soothe pain, to offer new possibilities. It is painful when we see people who think that only others need to be cleansed, purified, and do not recognize that their weariness, pain and wounds are also the weariness, pain and wounds of society.”

The pope also broaden the responsibility for rehabilitation of the inmates to include not only the prisons of the criminal justice system but all sectors of society.

“This time in your life,” he told the inmates, “can only have one purpose: to give you a hand in getting back on the right road, to give you a hand to help you rejoin society. All of us are part of that effort, all of us are invited to encourage, help and enable your rehabilitation. A rehabilitation which everyone seeks and desires: inmates and their families, correctional authorities, social and educational programs. A rehabilitation which benefits and elevates the morale of the entire community.”

(Read the entire text of the pope’s address at the prison, and see a photo gallery of the visit.)

The visit of Pope Francis gives Sister Elizabeth hope not only that people will better understand the system of incarceration and the people behind its bars, but all those who are marginalized in society.

“The coherence of his agenda will be a catalyst for change,” she said. “It gives people who work with these issues a place to stand and have their voices heard.” As an example she cited Mercy Sister Mary Scullion, who runs the Philadelphia homeless shelter and anti-poverty advocacy organization Project HOME. Its Mercy and Justice campaign coincided in September with the World Meeting of Families and the papal visit to the city.

“It gives her and her work, for example, higher standing,” Sister Elizabeth said.

The pontiff naturally embraces those who live on the margins of society, and he is also known for being a figure of “spontaneity,” Father Martin said, adding the pope’s spontaneous public gestures have been the most impactful, such as when he embraced a physically disfigured man in a crowd.

“That’s really what religion is about — care of the poor and love of your neighbor,” said Sister Elizabeth. “Pope Francis’ visit will definitely spark conversation about these issues,” she added, and she hopes it will bring a face and a name to those in our society who are often faceless and nameless.

PREVIOUS: Speaker at Festival of Families had link to Philadelphia saint

NEXT: For Belgau, it’s time to talk about being gay and a faithful Catholic