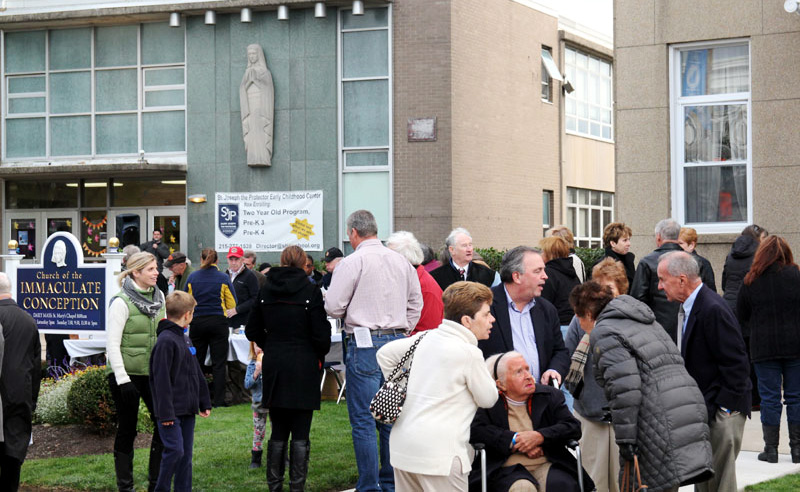 West Avenue in Jenkintown in front of Immaculate Conception Church was shut down to traffic after Mass for the festivities. (Sarah Webb) 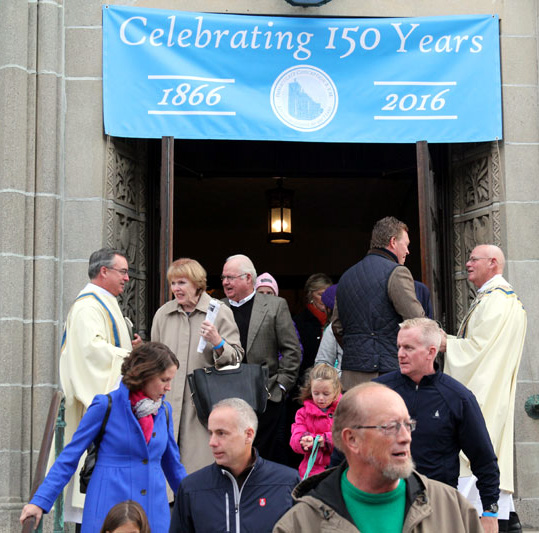 Immaculate Conception Parish, Jenkintown, marked the opening of the celebration of 150 years as a parish with a celebratory Mass on Saturday, Oct. 17 followed by a huge block party in the neighborhood.

(See a photo gallery from the celebration here.)

When it is was founded, the title “Immaculate Conception” wasn’t applied. The earliest records refer to “St. Mary” or “St. Mary Major.” The first records really date back to 1857, when priests from Our Mother of Consolation would travel from Chestnut Hill to serve the tiny congregation. The first baptism was of William Sullivan in 1864 before the parish was formally erected.

A bit later we see Father Thomas Toner, an assistant pastor at St. Joachim in Philadelphia’s Frankford section, coming out to Jenkintown.

By June 1866, Father Toner had erected a rough wooden temporary chapel, and as The Catholic Standard sniped, “any building with architect beauty would be an improvement on it.”

The very next month the cornerstone was laid for a permanent church and by the following June The Catholic Standard could report, “The beautiful new church of St. Mary Major, at Jenkintown, Montgomery County, Pa., was dedicated to the service of Almighty God by Right Rev. Bishop Wood.”

In fact other sources were already referring to “Immaculate Conception,” which makes it the first of four churches within the Archdiocese to honor the Blessed Mother under this new title which was formally declared doctrine in 1854.

Over time Jenkintown grew from a small village surrounding a stage coach stop at Sarah Jenkin’s Tavern to become one of the most prosperous suburban towns and sharing the same telephone exchange with such Protestant magnates as John Wanamaker and Cyrus Curtis. Immaculate Conception grew to be one of the prime parishes of the Philadelphia Archdiocese. In 1895 an equally thriving school was founded, for most of its history under the direction of the Sisters of St. Joseph, with Mother St. Stephen as the founding superior. In 1918 during the influenza pandemic, sisters from the school volunteered for nursing duties at Abington Hospital.

On Feb. 1, 1928 there was a bit of a setback when a fire virtually destroyed the church. Father John Cavanaugh, who was then pastor, very quickly raised $102,000 within a month, a huge sum at the time and luckily a year before the onset of the Great Depression. A new and enlarged church soon followed, incorporating walls still standing from the previous structure.

The next pastor, Msgr. John McNally, who served for the next 38 years, was a remarkable priest who for part of that time doubled as vicar general for the entire archdiocese and oversaw many programs and initiatives. Among the distinguished visitors to the parish was Bishop and now Venerable Fulton Sheen; according to a parish history he was a personal friend of Msgr. McNally.

Msgr. William Flatley, who succeeded Msgr. McNally, was a former Army chaplain with World War II service in Europe as well as pastor of two parishes before arriving in Jenkintown. Under his administration the parish buildings were thoroughly renovated and a number of social programs were introduced. Among them was Aid for Friends under the leadership of Karen and Michel Molloy, which 40 years later is still providing meals and companionship to mostly frail elderly shut-ins.

Msgr. Flatley was succeeded by Msgr. John Conahan, and for the most recent five years, Msgr. David Diamond.

“I believe I’m the fourth pastor over the past 85 years,” he said.

While Immaculate Conception has been blessed by the stability engendered by pastors with relatively long ministry in the parish, the same can be said for the people.

Mark Merlini, who has served on various parish committees and is an extraordinary minister of holy Communion, has been a member for 59 years since he was 3. His family had to move from Northeast Philly because they outgrew their house. It’s a good thing they did, because while Mark was number six, the family ended up with 15 kids and all went to Immaculate Conception School.

He remembers serving Mass with Msgr. McNally and Msgr. Flatley, and also watching the new school built and the old one torn down. Of his teachers, he best remembers Sister Miriam, who taught sixth grade. “She would come out and play football with us. She was the steady quarterback even though she was in full habit,” he recalls.

Descendants of his parents have grown to 55 grandchildren and 40 great-grandchildren at this point, although all of his siblings have moved away. “My daughter was married here two years ago,” he said. A tangible memory of the family will be a new sanctuary lamp they recently donated.

Today’s Immaculate Conception does have a number of parishioners who are lifelong parishioners, although the large Catholic families are a thing of the past. Msgr. Diamond especially notes that many families bring young children to Mass.

“It is very welcoming to kids,” he said. “We don’t have a crying room but nobody gets dirty looks if the kids start to cry. There is a real sense of community in relationship to the family.”

As with virtually every older parish in Philadelphia and its near suburbs, membership has diminished somewhat from the highs of two or three decades ago, but the parish still attracts approximately 1,100 worshippers weekly to a Mass schedule that includes both Saturday and Sunday evening Masses.

Of course most of the spiritual, liturgical, educational, social and youth programs one encounters in a thriving parish exist at Immaculate Conception. Msgr. Diamond makes special note of parish outreach, including casseroles for St. John’s Hospice and the long-standing Aid for Friends program.

Lauren Boyle, who along with her husband Patrick are parents of toddler twins Declan and Catherine, have been bringing the littles ones to Mass since they were three weeks old.

“We never felt we were being judged or looked at when they cried or made noise,” she said. “The kids are integrated with everyone else.”

The Boyles, who moved into the area four years ago, also serve with the Pre-Jordan baptismal preparation team as parental witnesses, sharing their experiences with new parents in the classes.

When they arrived they didn’t realize it was a parish with such a long history. “It’s a strong parish that keeps getting renewed every year with a new generation,” Lauren said. 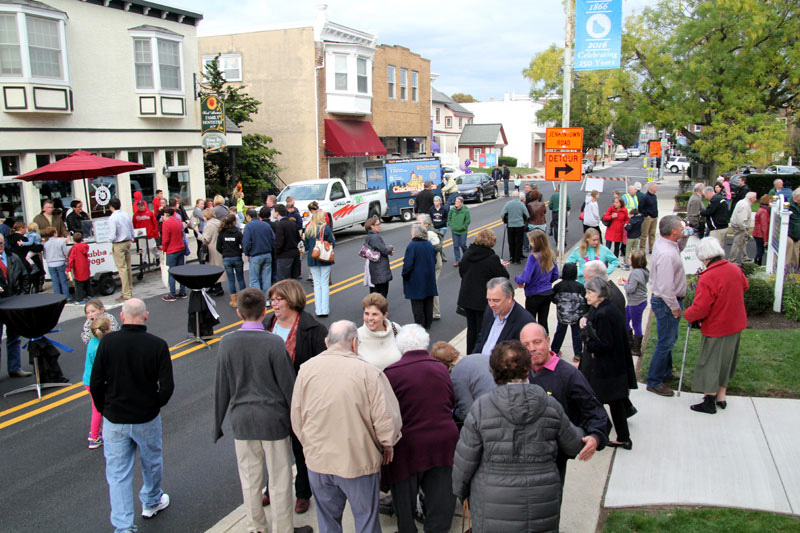 The block party on West Avenue in Jenkintown gets underway after Mass.

NEXT: Local and global plans laid out for Year of Mercy