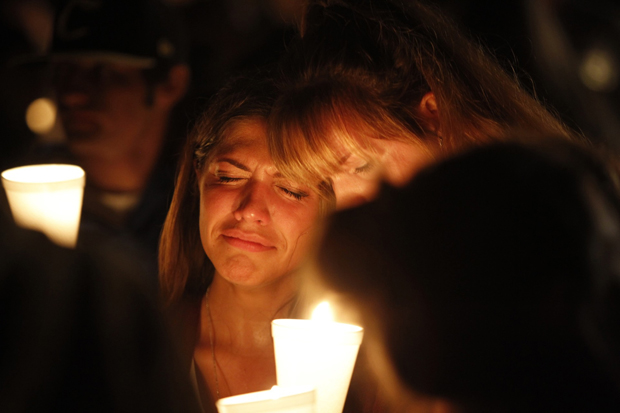 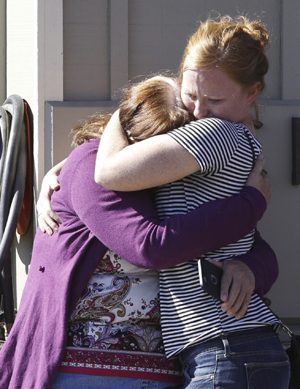 PORTLAND, Ore. (CNS) — St. Joseph Parish in Roseburg hosted an emotional Mass the evening of Oct. 1 for 10 people who died in a shooting that morning at Umpqua Community College. Auxiliary Bishop Peter Smith traveled from Portland for the liturgy.

Authorities in Roseburg, in green rolling hills 180 miles south of Portland, identified the shooter Oct. 2 as 26-year-old Chris Harper Mercer, but did not give details about him. The names of those he fatally shot had not yet been released. Nine others were wounded.

FBI investigators say the gunman brought six legally purchased weapons to the small college and was wearing a flak jacket. A witness reports he asked students what their religions were before he began shooting.

One student at the college and the sister of a second student both told news organizations that Mercer 26, told people in classrooms to stand up and declare whether they were Christian. If they responded yes, they were shot in the head. If they answered no or gave some other answer, they were shot elsewhere.

The attack ended when police shot the gunman on campus.

At a Roseburg news conference Oct. 2, after Douglas County Sheriff John Hanlin refused to answer more questions, a foreign reporter called out, “Why does this keep happening in America?”

Portland Archbishop Alexander K. Sample rushed a letter to the people of Roseburg hours after the shooting.

“I am saddened beyond words over the tragedy that has struck your local community,” the archbishop wrote. “Even though I am unable to be physically present with you at this particular moment, know that I am very much united with all of you in spirit and in prayer. We are one body in Christ, and when even one member suffers, we all suffer with them. My heart is indeed very heavy with sorrow as I grieve with all of you.”

The archbishop went on to say he cannot begin to make sense of the tragedy.

“Why such shooting tragedies continue to happen is hard to understand,” he wrote. “Sadly, we live in the midst of a culture that does not value the dignity and sacredness of every human life as it once did.”

The archbishop told Catholics in Roseburg to “unite their suffering” with those directly affected and to pray for healing and strength of those who lost loved ones.

Many Catholic parishes in Oregon are sending what organizers call “Posters of Hope” to St. Joseph Church in Roseburg. Teens have been writing messages of encouragement and love for Roseburg residents.

Comments have come from around the nation.

“There’s another community stunned with grief, and communities across the country forced to relieve their own anguish, and parents across the country who are scared because they know it might have been their families or their children,” President Barack Obama said at the White House Oct. 1. 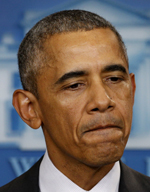 U.S. President Barack Obama looks grim as he speaks about the shootings in Oregon from the White House in Washington Oct. 1. He blamed the gun lobby for blocking gun control legislation. (CNS photo/Kevin Lamarque, Reuters)

He added, “It cannot be this easy for somebody who wants to inflict harm on other people to get his or her hands on a gun. … I’d ask the American people to think about how they can get our government to change these (gun) laws and to save lives and to let young people grow up, and that will require a change of politics.”

“What should have been a sanctuary for education and a symbol of bright futures will now become the latest memorial of victims lost to America’s gun violence epidemic,” said Dan Gross, president of the Brady Campaign to Prevent Gun Violence.

“All of our faith traditions abhor violence, and Ecumenical Ministries of Oregon has joined the National Council of Churches in calling for action to prevent gun violence,” said Jan Elfers, interim executive director of Ecumenical Ministries of Oregon. “Our prayers go out to all whose lives have been impacted by this terrible tragedy; to the victim’s families and friends, and to the entire Roseburg community. We are grateful to those who responded to the emergency and undoubtedly prevented the loss of even more lives.”

“Mass shootings like this happen too often and Oregon has not been immune,” said the Rev. Chuck Currie, director of the Center for Peace and Spirituality and University Chaplain at Pacific University in Oregon. “Today we offer our prayers for those killed and injured. We also lift up the families of those impacted. Still, we must also work to take steps that reduce gun violence this day so that there are no more days like this.”

“We pray for the victims and their families, and we call for reasonable gun violence control measures to save more innocent lives from meeting the same tragic ends,” said an Oct. 2 statement by the Jewish Committee on Public Affairs. “What’s more, it appears this crime may have been motivated by anti-Christian bias. Crimes based on prejudice and hatred are deplorable and are anathema to the fundamental values of democracy upon which this nation is founded.”

The statement added, “The overwhelming carnage from the endless stream of mass shootings is utterly unacceptable. Comprehensive and fully enforced gun regulation and violence prevention is needed to restore the safety of our schools, communities, and public spaces. While no single solution will prevent all future tragedies, we are committed to supporting efforts to save lives.”

Pax Christi USA said it “a profoundly sad reality that gun violence … is now so commonplace that it is difficult to remember and recall all of the mass shootings which have taken place in our nation over the past few years.”

“It is time that we shake off our collective lethargy and root ourselves in a deep, sustaining and holy anger which will fuel a movement to end this insanity once and for all,” the statement added.

Langlois is a staff writer at the Catholic Sentinel, newspaper of the Archdiocese of Portland. Contributing to this story was Mark Pattison in Washington. 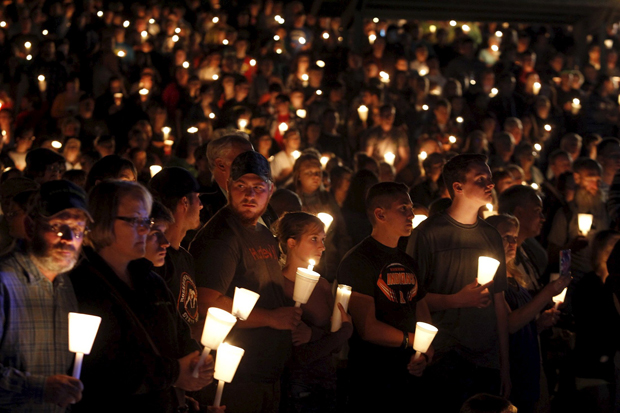