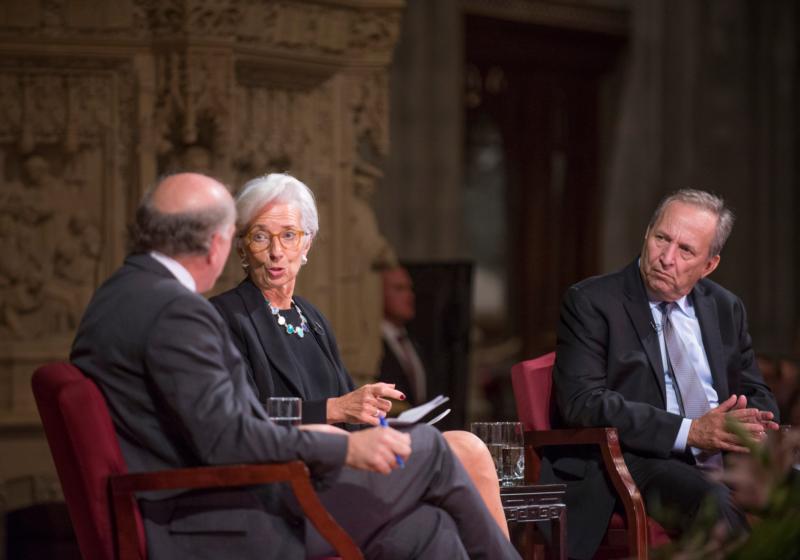 Late in a discussion on capitalism and morality at the Washington National Cathedral Oct. 28, moderator Idi Ignatius, editor of the Harvard Business Review, decided, given the setting in a house of worship, to see whether he could toss both Lagarde and former U.S. Treasury Secretary Lawrence Summers off their prepared talking points.

So he posed this question: “Is Christian faith incompatible with vast wealth?”

Lagarde, who grew up Catholic in France, parried the question with aplomb.

“I think it all depends on what you do with your wealth. If you’re prepared to share it, … if you use your talent as it’s called for in a productive, effective and generous way, and if you practice charity, I don’t see how, you know, wealth, in and of itself, would be a shame.”

She added, “I think it’s how you use it, what you do with it, and what purpose you give to your life as a result which really matters.”

Those words echoed her June speech before a Catholic conference in Belgium in which she asserted, “It is not immoral to enjoy one’s financial success.”

Summers, who’s Jewish, drew laughs when he observed, “I hope this is the last time I’m asked to opine on Christian morality,” then agreed with Lagarde: “It depends on how you use your wealth (that) absolutely feels right to me.”

The challenge, he said, “is to harness and control and provide a scaffolding for the people to live out their dreams, including their dream to accumulate great wealth, in ways that cause them to serve society. But I think it would be terribly dangerous to suppose that people who seek wealth and succeed are presumptively doing something immoral. And I certainly hope that that would not be a proper reading of Christian faith.”

The discussion of public morality, sustainable economic growth and government policies that encourage redistribution of wealth included themes touched on by Pope Francis during his apostolic visit to the United States in September.

The pope, in fact, was the only religious leader quoted during the evening. Ignatius referred to the pope’s speech in Bolivia July 8: “Let us say ‘no’ to an economy of exclusion and inequality, where money rules, rather than service. That economy kills. That economy excludes. That economy destroys Mother Earth.”

The Rev. Gary Hall, dean of the cathedral, reached back farther in his introduction to the program, quoting from the pope’s apostolic exhortation of 2013, in which he called capitalism “a new tyranny” and called on political leaders to address income inequality.

Francis, in the statement defining his papacy, also attacked “trickle-down theories” which express “crude and naive trust in the goodness of those wielding economic power and in the sacralized workings of the prevailing economic system.”

She concluded that “excessive inequality is not good for sustainable growth,” adding, “We need to have a moral compass” in government economic policies.

Summers, a former chief economist of the World Bank who served as treasury secretary from 1999 to 2001, praised the expansion of global trade for lowering childhood mortality rates, but attacked economic policies that created a situation where “the prosperous do best, and everyone else falls behind.”

To end income inequality that harms middle-class Americans, “generating a high-pressure economy is the most important thing we can do over the next five years,” he said.

NEXT: Religious freedom said to merit ‘seat at the table’ with other concerns