In wake of Buffalo massacre, Catholics pray to racism 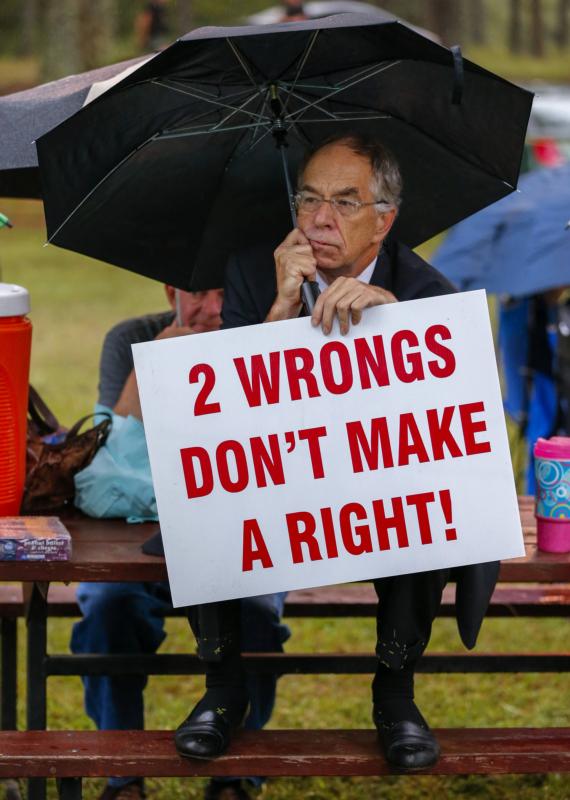 Anti-death penalty protester sits in the rain outside the Georgia Diagnostic Prison in Jackson before the scheduled execution of Kelly Gissendaner Sept. 29. Reversing a 40-year stand on the issue, the National Association of Evangelicals now opposes the death penalty. (CNS photo/Erik S. Lesser, EPA)

WASHINGTON (CNS) — The board of directors of the National Association of Evangelicals approved a resolution Oct. 19 that changes its position on the death penalty, which the group supported in a 1973 resolution.

The new resolution, which is the standing policy of the group, does not reverse its initial position but acknowledges that some evangelicals are opposed to capital punishment.

It states that evangelical Christians “differ in their beliefs about capital punishment, often citing strong biblical and theological reasons either for the just character of the death penalty in extreme cases or for the sacredness of all life, including the lives of those who perpetrate serious crimes and yet have the potential for repentance and reformation.”

“We affirm the conscientious commitment of both streams of Christian ethical thought,” it adds.

The resolution also notes that even as evangelicals hold differing views on capital punishment, they are “united in calling for reform to our criminal justice system. Such reform should improve public safety, provide restitution to victims, rehabilitate and restore offenders, and eliminate racial and socioeconomic inequities in law enforcement, prosecution and sentencing of defendants.”

The group’s 1973 resolution said in part that “victims of lesser crimes have also become the victims of murder since the virtual elimination of capital punishment as a matter of practice in our society. The number of such incidents has greatly increased following the court decisions, which ruled unconstitutional most state laws calling for capital punishment.”

The resolution also stressed that if “no crime is considered serious enough to warrant capital punishment, then the gravity of the most atrocious crime is diminished accordingly. It follows then that the attitude of criminals will be affected.”

Heather Beaudoin, director of evangelical outreach for Equal Justice USA and a national coordinator for Conservatives Concerned About the Death Penalty, said there have been “growing concerns among the NAE leadership about problems with the death penalty.”

Beaudoin, who has been meeting with evangelical leaders across the country for the past several years and gave a presentation last year to the board of directors of the National Association of Evangelicals, said the concerns of this group “mirror what I have been hearing when I talk to Christians across the country.”

“More of them are questioning their support for the death penalty as they learn about its mistakes and bias,” she said in an Oct. 19 statement.

NEXT: To build new life in U.S., family has struggled but now ‘we are safe’