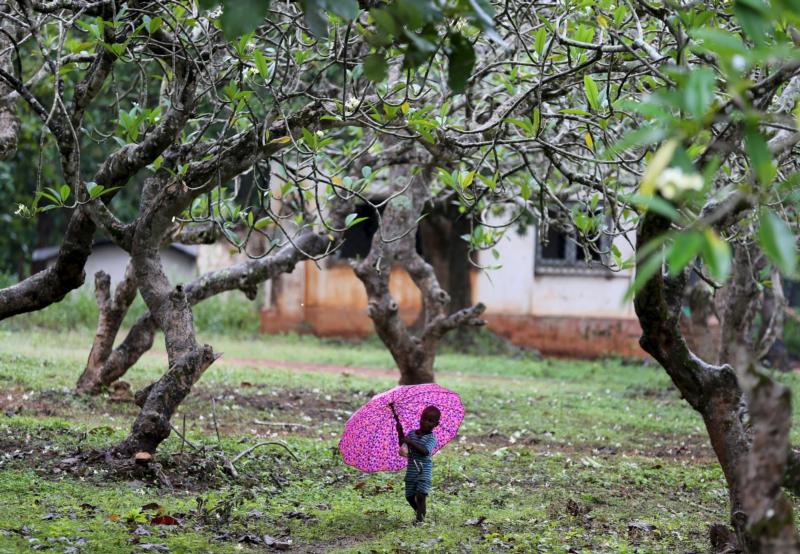 A boy walks with an umbrella during a shower in Bambari, Central African Republic, Oct. 17. Faith leaders there hope Pope Francis' November visit will help with the peace process. (CNS photo/Goran Tomasevic, Reuters)

“This will be a key event for all Central Africans, whatever their religious affiliations,” said Imam Omar Kobine Layama, president of the Islamic Council. “We’re hoping the Holy Father will bring a clear message about the unity of believers, interfaith dialogue, human rights and peace, which could really liberate us and help rebuild social links the various armed groups have destroyed.”

Pope Francis will visit the capital, Bangui, Nov. 29-30, after visiting Kenya and Uganda. Included in his itinerary is a meeting with Muslims in the city’s central Koudoukou mosque.

In an Oct. 22 interview with Catholic News Service, the imam said Muslim leaders had asked Pope Francis to call on rebel groups to give up their weapons after U.N.-sponsored disarmament efforts had failed “to get the message across.”

“The Holy Father has already done a great deal to help all Central Africans, whether they’re Catholics, Muslims, Protestants or animists,” he told CNS. “This will be, first and foremost, an occasion for prayer. But it will also allow us to present our Muslim community to the world, highlighting its anxieties and fears.”

Meanwhile, the secretary-general of the Central African Republic bishops’ conference said Muslim representatives had been consulted about plans for the two-day visit and how the pope’s presence could best serve to ease the crisis.

“The Holy Father will speak to the hearts of both Christians and Muslims — we hope he’ll find the right words and gestures to save our country and enable us to move forward,” Msgr. Cyriaque Gbate Doumalo told Catholic News Service Oct. 22.

“People of all communities here are aware of the totality of tasks we face and very much need encouragement and hope. The conditions are right, and we count on them to respond appropriately at this important moment for testimony, forgiveness and reconciliation.”

The Catholic Church’s nine dioceses make up a third of the 4.4 million inhabitants of the Central African Republic, where a rebel Seleka movement, led by Arab-speaking Islamists, suspended the constitution in March 2013 but was driven back after the January 2014 deployment of French and African peacekeepers.

A National Reconciliation Forum, convened by the country’s transitional parliament in May, brought armed factions from Seleka and its Christian-dominated rival, Anti-Balaka, into preparations for an Oct. 4 constitutional referendum. However, the national vote was postponed after a late-September upsurge of Christian-Muslim violence in Bangui left at least 36 people dead and 27,000 displaced.

The pope’s itinerary includes talks with the Central African Republic’s transitional president, Catherine Samba-Panza, and a prayer vigil outside Bangui’s Notre Dame Cathedral, as well as a meeting with Protestants and celebrating Mass at the city’s 20,000-seat Barthelemy Boganda Stadium.

Msgr. Doumalo said Bangui Archbishop Dieudonne Nzapalainga, president of the bishops’ conference, would be meeting with the Vatican nuncio and government officials to make final preparations for the visit.

He added that the Pope Francis would be meeting some of the Central African Republic’s 460,000 internally displaced inhabitants Nov. 29 at a refugee camp in St. Savior Parish near the stadium and said church leaders were working closely with African and French forces from the U.N. peacekeeping operation to ensure security for the visit.

“The preparations are now far advanced, and we’re praying nothing now dislodges them,” he said.

“Africans are naturally religious people — they believe in God and trust the pope’s capacity to help after all these barbaric sufferings. In this Year of Mercy, we hope his message will he heard throughout the region, and that groups like Boko Haram will see it as an occasion to return to the path of peace.”

NEXT: Pope: Christians must adapt to change by staying true to Christ