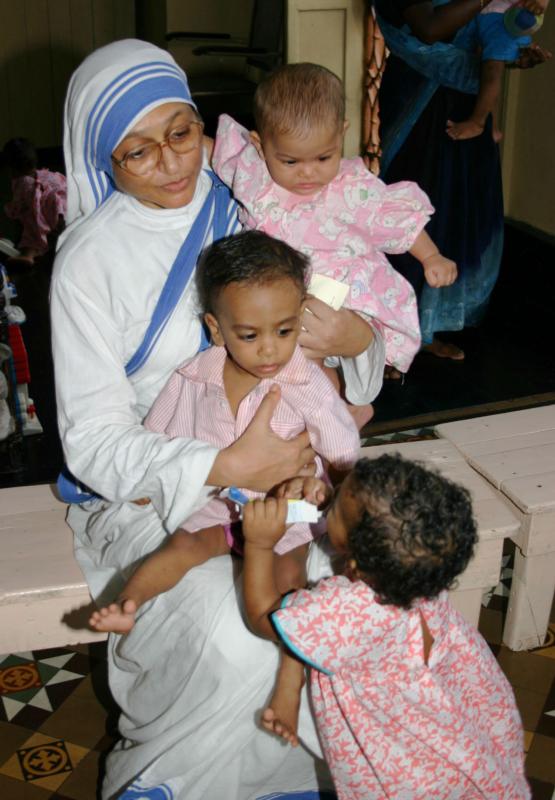 Founded by Blessed Teresa of Kolkata, the congregation runs orphanages across India, with 18 of them government-recognized centers that offer children for adoption.

But the nuns do not want to run adoption centers in India now, said Sister Mary Prema, the congregation’s current superior general.

The nuns decided on this voluntarily after the Missionaries of Charity headquarters in Kolkata was informed about complying with the new Guidelines Governing Adoption of Children by the federal Ministry of Women and Child Development, said an Oct. 10 statement issued by Sunita Kumar, spokeswoman for the congregation.

“If we were to continue the work set up by Mother Teresa, complying (with) all the provisions would have been difficult for us,” the statement said.

The guidelines, issued in July, aim to regulate adoptions nationwide. They require all applications and processing to be done online and based on the seniority of applicants at the time of application.

They say a single woman is eligible to adopt a child of any gender but that a single man is not eligible to adopt a girl child. They also say parents shall be given an opportunity to view the photographs, child study and medical examination reports of up to six children.

Father Joseph Chinnayan, deputy secretary-general of the national bishops’ conference in India, said there are basic issues with these clauses.

The first clause would mean that unmarried adults in same-sex relationships, couples living together, and those divorced or separated could adopt children, contrary to the church’s thinking about family and parenting, he said.

The guideline also says that those wishing to adopt have an option to choose from up to six children, which “offends the dignity of children,” Father Chinnayan said.

“The bishops endorse the decision of the Missionaries of Charity,” he said, adding that church officials will discuss the issue with lawyers to find out more about the consequences of the guidelines and ways to mitigate them.

According to the government’s Central Adoption Resource Authority, India had almost 4,000 in-country adoptions between April 2014 and March 2015.

Sister Prema could not say the number of children the nuns give up for adoption every year, but said about one-third of the congregation’s adoptions are in India.

The Missionaries of Charity statement said the nuns “will continue to serve wholeheartedly and free of charge unwed mothers, children with malnutrition and differently abled children” in all their institutions “irrespective of caste, creed and religion.”

The adoption work started by Mother Teresa “has been a fruitful and rewarding experience, which has changed the lives of thousands of people,” it said.

Sister Prema told ucanews.com that her nuns have not decided on the future of all children under their care but they will “look after for life” the differently abled children.

NEXT: Visit to Africa listed among pope’s upcoming events