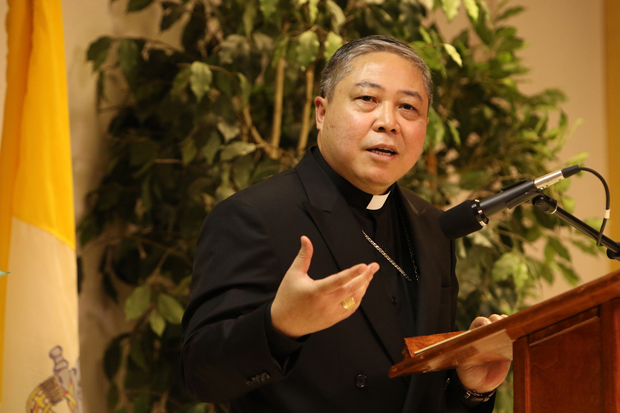 UNITED NATIONS (CNS) — Despite the good news that the percentage of people living in extreme poverty is set to go below 10 percent for the first time since such data has been collected, much work remains if the United Nations’ goal to wipe it out entirely by 2030 is to be met, according to Filipino Archbishop Bernardito Auza, the Vatican’s permanent observer to the U.N.

“The number of people still living in extreme poverty continues to be unacceptably high. The more than 700 million extremely poor remind us of the magnitude of the challenge still ahead,” Archbishop Auza said in remarks delivered Oct. 13 at a U.N. committee session on poverty eradication and development issues.

According to World Bank figures issued Oct. 4, 2.2 billion people worldwide live on less than the equivalent of $2 a day. “That is only a slight decline from 2.59 billion in 1981. It indicates that poverty resistance is stronger, as we progress higher in the economic ladder,” Archbishop Auza said.

Those living in extreme poverty live “usually in very remote areas and living in extreme want,” the archbishop said. “Without roads and electricity, access to education, health care, safe water and other critical services remains uncertain for these people.”

The U.N.’s 2030 Agenda for Sustainable Development places the eradication of extreme poverty as its top priority, placing it in the context of a global environmental crisis.

“For too long, development has been understood in terms of ever greater economic growth and wealth accumulation, oftentimes at the expense of the environment and of human life itself,” Archbishop Auza said. “This concept of development has fueled an unrestrained quest for the biggest profit margin and has driven the exploitation of peoples and an assault on our common home. Such a model of development is not what we need to eradicate poverty.”

The Vatican supports the U.N.’s sustainable development agenda, according to Archbishop Auza, and its call for a “new paradigm” for development, which “must start with the core principle of the dignity of each human person and must recognize that extreme poverty is primarily a denial of that dignity.”

He reminded the committee of Pope Francis’ Sept. 25 remarks at the U.N., in which he said, “Above and beyond our plans and programs, we are dealing with real men and women who live, struggle and suffer, and are often forced to live in great poverty, deprived of all rights.”

The human dignity of the poor, the nuncio said, requires that they be allowed “to shape their own development.”

“Exclusion,” Archbishop Auza said, “is a denial of human dignity and the main cause of extreme poverty. One of the most damaging forms of exclusion has been the exclusion of women and girls in the area of education, a form of exclusion that is particularly harmful in a world where knowledge is the key to economic success and to a dignified life.”

NEXT: Infertility leads to sadness, and in Africa, divorce