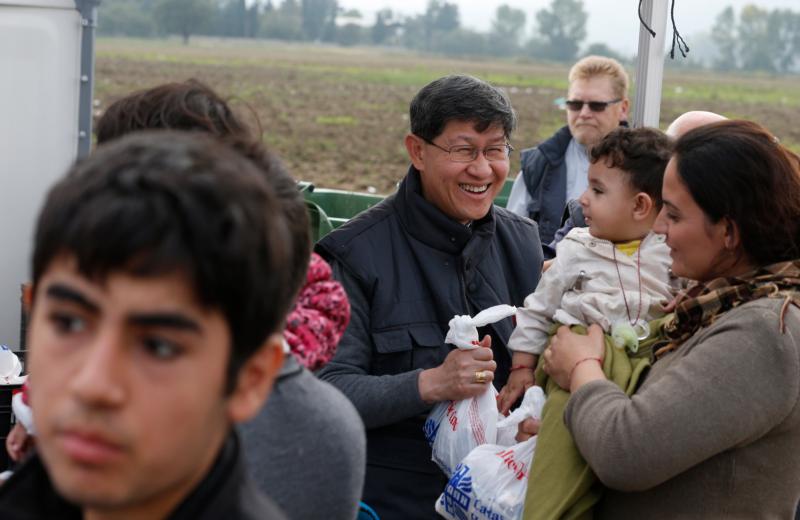 Cardinal Luis Antonio Tagle of Manila gives a food bag to a refugee family as they arrive at a transit camp in Idomeni, Greece, on the border of Macedonia Oct. 19. Thousands of refugees are arriving into Greece from Syria, Afghanistan, Iraq and other countries and then traveling further into Europe. (CNS photo/Paul Haring)

Thousands of people fleeing Syria, Iraq and Afghanistan pass through the makeshift transit center daily at Idomeni, a Greek village — population 120 — on the border with Macedonia.

The crossings began as a trickle in the summer and by late October were occasionally reaching 10,000 refugees passing through in a single 24-hour period.

“Uncertainty is the name of the game,” said Cardinal Luis Antonio Tagle of Manila, Philippines, president of Caritas Internationalis.

The cardinal visited the camp Oct. 19 with members of Greece’s Caritas Hellas and helped them hand out bags of food to refugees arriving on buses from Athens, 380 miles to the south. With a little bit of rest, some food, water and a toilet break, the refugees continue their journey north, most hoping to join family already in Germany, the Netherlands, Sweden or Norway.

Amin and Sambra are a young Sudanese couple who were living and working in Syria when the war broke out; they were given refuge in Turkey, but not a work permit, so Amin could not provide for his growing family. He said he paid 2,500 euros ($2,850) for the whole family to get on a rubber boat to Greece. Sambra gave birth to their fourth child Oct. 13 on the island of Samos. Then they headed for Athens and on to Idomeni.

Those standing in line near the border — marked with rolls of barbed wire — outside the Idomeni camp share key parts of Amin’s story. Fleeing Syria, Iraq or Afghanistan, they traveled to Turkey. From there, they paid smugglers more than 1,000 euros each for a place in an overcrowded rubber boat bound for one of the Greek islands. Once in Greece, they paid to ride a ferry to Athens, and then they paid 80 euros for the bus ride to Idomeni. They will walk half a mile to cross the border, then pay 25 euros for a train ticket to Belgrade, Serbia, four hours away.

Luca Guanziroli, a staffer of the U.N. refugee agency, UNHCR, said the train ticket cost only 5 euros in the summer, but the Macedonian government has raised the price due to the increased demand. 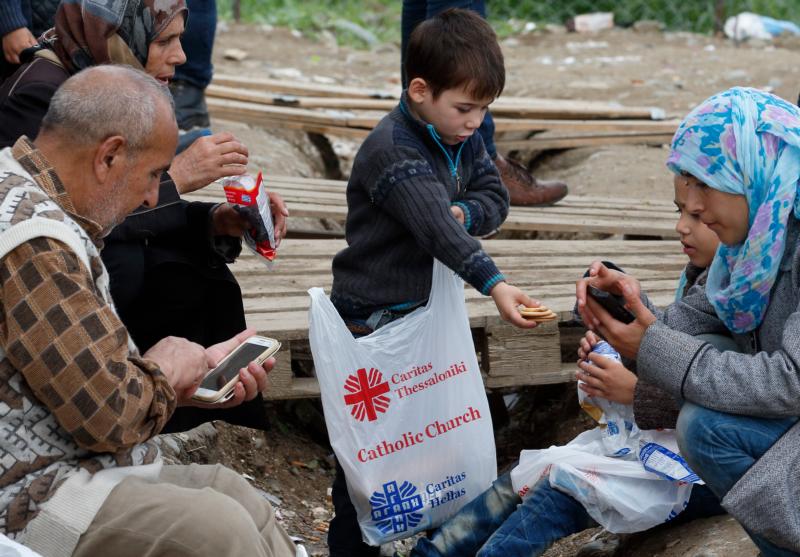 A boy hands cookies from a food bag given by Caritas to family members at a transit camp for refugees in Idomeni, Greece, on the border of Macedonia Oct. 19.  (CNS photo/Paul Haring)

Just outside the Idomeni transit camp, some enterprising Greeks have parked food trucks. It seems, however, that their most popular offering is a connection to their generators; they will recharge cell phone batteries with the purchase of a beverage or sandwich.

The UNHCR still is trying to secure electricity to the camp for more than its current two or three hours a day.

Patrick Nicholson, communications director for Caritas Internationalis, said the Syrian refugee crisis is unusual for the network of national Catholic charities because it involves “working with people for very short periods of time over such a long route. We have people helping them all the way from Turkey to Germany.”

Guanziroli said the refugees are at the Idomeni center for anywhere from 30 minutes to 10 hours, depending on how many trains Macedonia runs and how many refugees there are arriving that day.

With only one paid staff member and dozens of volunteers, the Thessaloniki section of Caritas Hellas is providing what the refugees say they need in Idomeni. “Basically,” Nicholson said, “they say they want a snack and things that they can carry. They have everything they own on their backs and many are carrying children as well.”

Cardinal Tagle, who visited with the refugees after handing out the food bags, said that although the refugees are assured at each stage that they are safe now, the uncertainty continues. They don’t know when the trains will arrive, which borders will be open to them and how they will be treated by police and border control agents.

“What crosses my mind is can the nations not make it easier?” the cardinal said. “Can we not work together and say these are human beings? They already have escaped horrible, horrible experiences.”

Yasin, 29, and his shy young wife fled Aleppo. Syria, to the Kurdistan region of Iraq three years ago. Now, with four children who are between the ages of 1 and 9, they are trying to join family in Norway.

The boat from Turkey to Leros was the worst part, Yasin said. “We were crying and praying because of the waves. … Huge waves made water come into the boat, but at least we had life jackets.” Some news reports have said the jackets cost extra.

Father Antonios Voutsinos is president of Caritas Hellas; he has five paid staff and an army of volunteers who are trying to help meet the needs of the estimated 4,000 to 5,000 refugees entering Greece each day. Catholic Relief Services, the U.S. bishops’ overseas aid agency, has helped fund the work of Caritas Hellas.

Cardinal Tagle stood in the dusty transit center between a medical tent set up by Doctors Without Borders and the little awning that marks the spot where Caritas volunteers handed out 1,200 food bags in just two hours Oct. 19.

“Caritas Hellas has only one paid staff person here; all the others are volunteers taking their turns every day to pack food, to sort out donations of clothing and coming here to spend the day or evening with refugees,” he said. “That is ‘caritas,'” which means love.

“Yes, Caritas Hellas is the beneficiary of a lot of goodwill and donations from other parts of the world,” he said, “but in the end, without the warm bodies, without the spirit of volunteerism … Caritas as an institution will not survive.”

“Caritas is Caritas because of those simple people who give of themselves,” the cardinal said.

While weary, the refugees are calm at Idomeni. They are organized into groups of 50 to receive food, rest a while, then move in orderly, well-spaced groups across the border and, they hope, on to trains.

The uncertainty obviously is greatest for the children, but the 6-year-old girl in the brand new, one-piece, red polka dot pajamas with reindeer on the pockets was smiling broadly. Cardinal Tagle and the Caritas volunteers gave her raisins and dates and cookies and a juice box and water. And a caress.

PREVIOUS: Archbishop Chaput: In Philadelphia and in synod, support for Francis is obvious