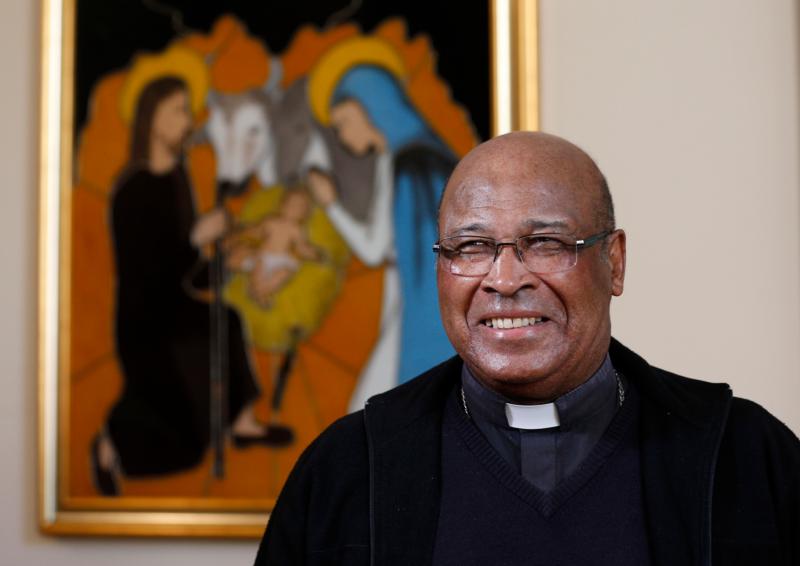 Cardinal Wilfrid Napier of Durban, South Africa, is pictured near an image of the Holy Family after an interview with Catholic News Service in Rome Oct. 7. (CNS photo/Paul Haring)

VATICAN CITY (CNS) — Greater emphasis on small-group discussions and incorporating that work into the synod’s final draft document is helping alleviate any suspicion of the synod being manipulated, said one of the four synod presidents.

Cardinal Wilfrid F. Napier of Durban, South Africa, told Catholic News Service Oct. 7, “I think this time we are aware of and I think the secretary of the synod (Cardinal Lorenzo Baldisseri) is aware that there are these suspicions and, therefore, I think there’s going to be a much more perhaps open-handed approach to the synod.”

As a member of the synod’s ordinary council, the cardinal was part of the group that planned this year’s general Synod of Bishops on the family as well as last year’s extraordinary synod.

Last year, Cardinal Napier had openly criticized the publication of a midterm report during the synod and the decision not to release summaries of the speeches participants gave in the synod hall. He and several other synod fathers at the time suggested that the midterm report did not accurately reflect the assembly’s views and that the press had no way of assessing the report’s accuracy.

Speaking to CNS on the sidelines of this year’s synod, Cardinal Napier said he had found it “strange” last year that the media had been given a detailed midterm report before the issues facing the synod had been fully discussed.

This meant the media “were given a certain direction that could only have come from inside and, therefore, raised the suspicion — which I think is not quite as strongly present now as it was” in the year between the synods “that there was some manipulation going on,” he said.

While summaries of speakers’ presentations still are not distributed by the Vatican, Cardinal Baldisseri insisted bishops were free to give their texts to whomever they wanted.

In addition, Pope Francis created a 10-person committee to oversee the drafting of the final synod document and ensure it incorporates the general discussions, small groups’ reports and written comments from synod participants.

Cardinal Napier said he has been pleased with the increased emphasis on and time given to the small group discussions, saying the bishops “have been given what we have always said is the best part” of a synod.

After just two days of meeting in the language-based groups, the cardinal said the discussions “have actually fulfilled my expectations. Really free and open exchanges, a real getting a good measure of what’s happening in the church in the various parts of the world,” and how the church and families help and support each other.

He said he thought that the input coming from the small groups was “already giving the draft document a direction which is rather difficult, I think, to work into a particular position.”

Rather than being focused on one particular view or approach, he said, the small groups are discussing “what we believe is the direction in which the church in general wants to go.”

When a final document is drawn up at the synod’s end, he said, “certainly the result I am looking forward to is a document that we can put into people’s hands,” which will give them very clear direction as to the mission and vocation of today’s families.

The focus of discussion and the final report, he said, has been on: “What can the synod do to make families really know where they fit in the church, how the church depends on them and in that way to really get themselves rejuvenated and renewed so they take on this role of evangelization.”

Cardinal Napier told reporters later that he believed families were hoping the synod would “be clear and very forceful in restating” the importance of the family for the church and society.

“If the family is weak, the church is going to be weak; it’s not the other way around,” the cardinal said. “The strength of the church comes from the families, so let’s give the families every support we can.”

PREVIOUS: Church and society must learn from families, pope says at audience