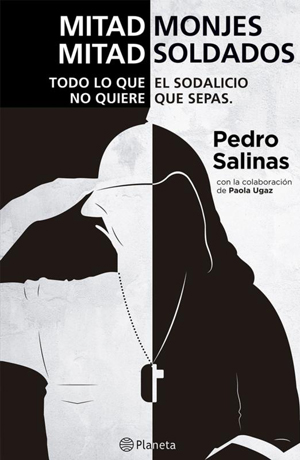 This is the cover of “Mitad Monjes, Mitad Soldados” (“Half Monks, Half Soldiers”), by Pedro Salinas. Accusations of physical, psychological and sexual abuse by leaders of a Catholic movement founded in Peru in the 1970s are described in the book. (CNS photo/courtesy Planeta de Libros)

LIMA, Peru (CNS) — Allegations of physical, psychological and sexual abuse by leaders of a Catholic movement founded here in the 1970s have led to a lawsuit against Lima Cardinal Juan Luis Cipriani and a promise of an internal investigation from the group’s leader.

The allegations were described in a new book, “Mitad Monjes, Mitad Soldados” (“Half Monks, Half Soldiers”), by Pedro Salinas, a former member of Sodalitium Christianae Vitae, who interviewed about 30 other former members.

The interviewees, some of whom were minors when they joined the group and moved into one of its formation houses, recalled military-style physical exercise and separation from family and friends. Some said spiritual directors had ordered them to disrobe and then touched them, and there were several accounts of rape. One of those accused is the organization’s founder, Luis Fernando Figari.

Figari resigned as head of Sodalitium in late 2010, after the organization withdrew its proposal for the beatification of its deceased former vicar general, German Doig, in the wake of sex abuse allegations.

After a televised interview with Salinas Oct. 18 and a public presentation of the book four days later, the Peruvian prosecutor’s office announced that it would investigate. Although the statute of limitations for sex crimes probably has expired for the cases described in Salinas’ book, if more recent cases are found, they could be subject to prosecution.

A nonprofit children’s rights organization, the Institute for Defense of the Rights of Minors, also filed a formal complaint with the prosecutor’s office Oct. 22, accusing Cardinal Cipriani, the president of the Interdiocesan Church Tribunal of Lima and Sodalitium’s vicar general of cover-up, obstruction of justice, complicity in crimes of rape of minors and failure to report a crime.

After the initial television report, Sodalitium issued a communique asking forgiveness of “anyone who has suffered because of actions or omissions committed by some members of our community” and offering “our willingness to listen and help.”

The message noted that Figari had been living in a Sodalitium community in Rome with no involvement in the organization’s leadership since 2010. After receiving “a series of testimonials,” the current superior had ordered him to “intensify that life of retreat” in 2014, the statement said.

According to immigration records reproduced in Peruvian media, Figari has visited Peru regularly since 2010.

“It pains and shames us deeply that such acts could have been committed by Luis Fernando Figari, founder and for many years also superior general of our community,” the statement said. “We condemn the acts that may have occurred, especially those of sexual abuse.”

The statement noted that Figari maintained his innocence, “but has not wanted to make public statements, which would be his moral obligation.”

In the communique, Moroni said the organization was aware that complaints had been filed with church tribunals. He said Sodalitium was committed to “exhaustively investigating” allegations of abuse and would cooperate with civilian and church authorities.

Salinas said several former Sodalitium members had filed complaints with the Interdiocesan Church Tribunal of Lima. In a statement issued Oct. 21, the tribunal said it did not have the authority to investigate cases involving societies of apostolic life, such as Sodalitium, and had forwarded the accusations to “the appropriate Vatican offices.”

The allegations against Sodalitium followed two high-profile scandals involving Marcial Maciel Degollado, founder of the Legionaries of Christ in Mexico, and Chilean Father Fernando Karadima. Despite the publicity given those cases, however, the Sodalitium issue has not received the same public scrutiny in Latin America as in the United States and parts of Europe.

That is probably partly due to the Catholic Church’s political power in many Latin American countries, said Jose Mogrovejo, a psychology professor at the Pontifical Catholic University of Peru in Lima. People are also accustomed to crimes — from murder and human rights abuses to corruption — going unpunished, he said.

In addition, when a case involving sexual abuse of a child, often by a relative or family friend, makes the news, it is usually treated sensationally, with little attention to the trauma it causes the victim, Mogrovejo said.

PREVIOUS: Bishops from around the world plead for climate change action

NEXT: What does the Philippine church look for in a potential exorcist?