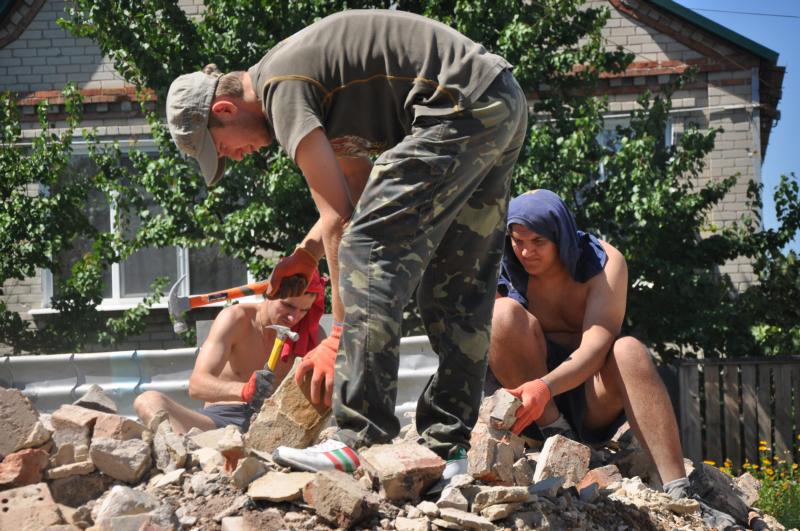 “We restore walls of the houses and destroy the walls between people,” is the slogan of volunteers with “Building Ukraine Together,” an initiative of young people from western and central Ukraine, who are helping people in the eastern regions to rebuild their houses destroyed during fights between pro-Russian militants and the Ukrainian military forces. Sixteen months of fighting left nearly 7,000 people dead and more than 17,000 injured, according to the U.N. refugee agency, UNHCR.

Ihor Feshchenko, a journalism student from the Ukrainian Catholic University, is one of the volunteers.

“Here in Lviv, we observe a war from 1,000 miles through tablets and computers or donate money sometimes. But during this camp, there was a sense that I was actually doing something that really helped,” he said. He added that he did not tell his mother that he was going to the east of the country, because the front line was just some 50 miles from the city in which they worked.

Volunteers work in the cities of Kramatorsk and Sloviansk, strongholds for pro-Russian forces liberated by the Ukrainian Army after fierce battles.

“We came to Kramatorsk after the city was liberated in late July 2014 on a weekend and saw great destruction. On some streets there were no buildings that survived,” recalled Vitaliy Kokor, executive director of Lviv Education Foundation, the nongovernmental organization that runs these small rebuilding projects.

After this trip, they decided to launch a reconstruction camp to answer the great need they saw. Sixty volunteers — students mainly from Lviv but also from Kiev — responded and took part in the camp for a month last fall. About $5,000 was raised on a crowd-sourcing platform, and local entrepreneurs helped with materials, so that close to 30 houses and apartments were renovated.

More construction camps were held in December and August, but even after 12 months of peace, the needs are still huge, said Kokor. He added that international charities, religious organizations, and small nongovernmental organizations like his cannot fill all the gaps.

Local people who suffered from the conflict help volunteers — with materials, food and manual labor.

“We see them as partners, for our true task is community-building and reconciliation, not only restoration of houses and apartments. A physical destruction is a consequence of mental confusion, conflicts between people,” said Kokor.

This was also the philosophy behind the small construction camps in Western Ukraine earlier this year. Volunteers from the East helped restore a house damaged by fire and a school assembly hall in the village of Bortnyky.

“There’s a lot of talk about the need for reconciliation in Ukraine, but we don’t think that’s where you begin. First, people need to work together, achieve something together, build relationships and trust, and then eventually they can tell their different stories,”said Jeffrey Wills, member of the Lviv Education Foundation’s board.

Construction and renovation works are not the only activity to bring the community together. The “Vilna Khata” (Freedom Home) in Kramatorsk and the “Teplytsia” (Greenhouse) in Slovyansk are youth programs that grew out of building projects. The programs invite young people for bonfires, movie screenings, and evening discussions and ask different organizations to present their initiatives. They hold exhibitions and workshops and invite famous cultural and public figures. For example, one recent guest in Slovyansk was Ukrainian Catholic Bishop Borys Gudziak of Paris, president of the Ukrainian Catholic University.

Andriy Kozlov, a university alumnus and native of Kramatorsk, said the educational component is as important as restorations.

“We need to create a critical mass of young people that would know the world and bring this knowledge to the city,” he told CNS.

Wills, who helped build Ukrainian civil society through different projects for 20 years, said there are several wars going on in Ukraine.

“The one against tanks, the one against ignorance and propaganda, the one against corruption, and perhaps the most importantly the one against hard hearts. In the name of ‘communism,’ the Soviet Union destroyed real community and caring for neighbors — and that’s what the service camps and youth initiatives are rebuilding,” he said.

“They are well aware that this week they could spend somewhere at the sea, but decided to help their country and people. The sense and understanding that this is my country and is my personal responsibility, I like most about this camp,”said Andriy Levytsky, manager of the projects and programs for Lviv Education Foundation.

PREVIOUS: Pope: Christians must adapt to change by staying true to Christ

NEXT: Annual celebration helps parents cope with the loss of their babies