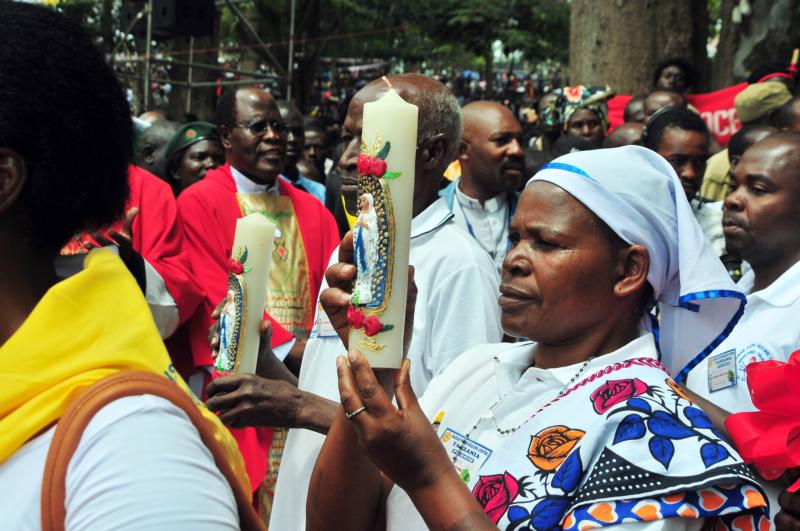 A nun carries a candle outside the Namugongo Shrine during the 2013 annual Uganda Martyr's Day Ceremony, which honors the 22 Ugandan martyrs who were who were burned to death for their faith between 1885 and 1887. (CNS photo/Ronald Kabuubi, EPA)

KAMPALA, Uganda (CNS) — The Ugandan bishops called on all Catholics to prepare spiritually for Pope Francis’ Nov. 27-29 visit to their country.

“The nature of this visit is primarily pastoral and spiritual,” the bishops said in a letter signed by Archbishop John Baptist Odama of Gulu, president of the Uganda Episcopal Conference.

Pope Francis’ visit has the theme, “You will be my witnesses.” The bishops said the pope will help Ugandans celebrate the 50th anniversary of the canonization of the Uganda Martyrs, who were burned to death for their faith between 1885 and 1887. The martyrs were canonized in 1964.

The bishops urged Christians to do penance and undertake acts of charity for the poor so they can receive the papal blessing in a worthy manner.

“In a country like ours, where unity and national consensus has eluded us for decades, the pope comes as a bridge builder,” the bishops said. They said the visit provides a golden opportunity for Ugandans to be instruments of unity, peace and reconciliation in the family and among various religious and cultural and political groups.

As a gesture to unite the faithful in prayer, the bishops asked that before the final blessing at every Mass, as well as in personal, family or community prayer, people recite one Our Father, Hail Mary and Glory Be for the intention of the pope and the success of his visit.

The bishops praised the church’s contribution to “health services and education to the poor and rich alike.” They noted that at the start of the 20th century, Uganda had barely 10,000 Catholics; now, slightly more than 45 percent of Uganda’s 34.9 million people are Catholics.

The bishops also noted the challenges to the church, including the “alarming gap and contradiction between the faith we profess and the life we live.” They mentioned traditional African practices like polygamy, cohabitation, witchcraft and human sacrifice, among others, as contradictory to Christian beliefs.

The bishops said Ugandan families are affected by infidelity, domestic violence, poverty, child abuse and diseases such as AIDS. They challenged the faithful to recommit themselves to promoting the values and sanctity of marriage and the family as well as rebuild the country’s moral fiber.

“The Uganda Martyrs are an ideal example of what is required of us to live the faith within the family and the church,” the bishops said, noting that some of the martyrs had married traditionally but chose to denounce polygamy and embrace monogamy in line with the Christian teaching.

Pope Paul VI visited Uganda in 1969 to celebrate the Uganda Martyrs. In 1993, St. John Paul II made a six-day pastoral visit to Uganda and elevated the Uganda Martyrs’ Shrine in Namugongo to the rank of a minor basilica. Namugongo is where most of the 22 Uganda martyrs were burned to death for their faith.